After 109 wildfire deaths, six felony convictions, and two bankruptcies, will PG&E get another chance? 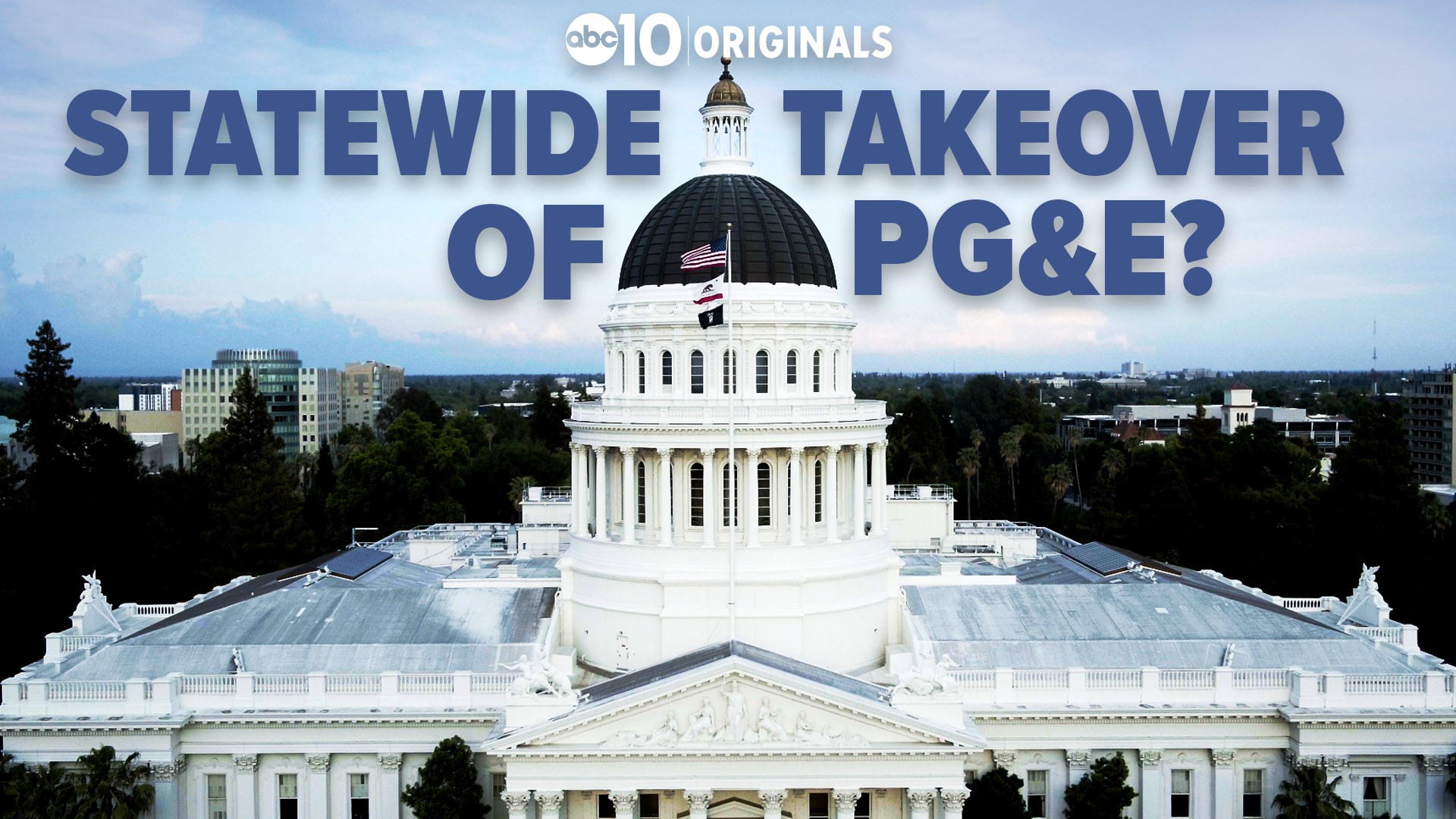 After causing deadly wildfires and widespread blackouts the Pacific Gas and Electric Company will have to face a new effort to end its monopoly over power service to 16 million people in California.

PG&E is in its second bankruptcy, is serving time on probation for six federal felonies, and has caused disasters that killed at least 117 people since 2010.

Buchanan, a self-described conservative, would like to see PG&E taken over by the government. That may still be a long-shot, but the idea is officially on the table in the state legislature as of this week.

So, how would a takeover work? What kind of a fight would the supporters be in for?

We took a deeper dive into the efforts underway to end PG&E's monopoly — both at the local and statewide level.

HOW THE TAKEOVER WOULD WORK

PG&E says its power lines and poles are not for sale, which means any government takeover would be hostile.

The state government has several tools at its disposal.

The state has the power to revoke PG&E's license to operate its monopoly. It also has the power to force PG&E to sell its poles and wires by condemning them under eminent domain law, which would require the government to pay fair market value.

Staffers familiar with Weiner's proposal prefer the potentially cheaper idea of having the state buy all of PG&E's shares of stock, which had a closing value of $8 billion as of the end of January.

However it happens, the idea is not to create new state agency. The new utility would have its own independent governing board, similar to a giant version of Sacramento's nonprofit electric provider, SMUD.

The new utility would pay for the takeover using revenue bonds. Similar to taking out a home loan, the new utility would borrow the money it needs to buy out PG&E, which would be repaid in small increments over the course of decades by the customers on their bills.

This plan is to offset this added cost by eliminating the profit that PG&E is allowed to collect from customers.

GOV. NEWSOM NOT ON BOARD, AT LEAST NOT YET

Gov. Gavin Newsom (D-California) ramped up his rhetoric against PG&E when the company's wildfire prevention blackouts caused chaos for days on end for millions of Californians throughout the month of October.

"PG&E, that company no longer exists," Newsom said at a speaking engagement in January. "There's gonna be a new company or the state of California's going to take it over.”

In an interview with ABC10, Wiener was clear that his plan is contingent on winning support from the governor.

"Nothing is going to happen if the governor hasn't signed off on it," Wiener said.

"That new company is going to be transformed," Newsom said. "And I think in five or 10 years, I think that IOU potentially could make every one of us proud, and it could be a model for the rest of the nation if we do our job."

Newsom has repeatedly threatened that he's prepared to back a government takeover if the company doesn't make sufficient changes, but he has not named a specific trigger that would cause the company to lose his support.

PG&E is used to getting its way at the state capitol. The governor and more than eight out of 10 state lawmakers — from both major parties — took campaign donations from the utility.

Newsom has said that the $208,000 PG&E donated to help him become governor do not influence his decision.

A handful of lawmakers decided to part ways with the money they received. Wiener, the sponsor of the bill to end PG&E's monopoly, did not return his $4,000 contribution.

"If they wanted to write me a check, a contribution that's fine. But clearly my record is of long-term conflict with PG&E to the point where they spent money to try to prevent me from coming to the Senate," Wiener said. "In the end the question is, 'What are you doing? How are you voting? What bills are you authoring? Are you enabling PG&E, or are you fighting them?'"

Pushback against PG&E dates back to the early 1900's when the company grew into its massive monopoly by gobbling up competitors.

In 1923, the voters of Sacramento decided they wanted out, but it would take 23 years of fighting in court with PG&E to finally break away and start SMUD.

The fight is still as challenging today. Right now, at least four localities are trying to do the same thing, including PG&E's hometown of San Francisco. The water authority in the Central Valley community of Manteca has been trying to exit PG&E for 16 years.

"We want to buy the poles and wires and we want local staff to operate those for the benefit of our neighbors," said Peter Rietkerk, who runs the South San Joaquin Irrigation District.

SSJID provides water to Manteca and the orchards that surround it, but the district is not a newcomer to selling electricity.

"We've been generating power and providing it on the bulk electric market for 50 years," Rietkerk said.

After years of fighting for approval from a local board that coordinates government services, SSJID made an offer of $116 million to buy the poles and wires in its area.

"We made that offer in 2016 in May to PG&E. PG&E summarily rejected it," Rietkerk said. "They said their assets are not for sale."

THE BANKRUPTCY STANDS IN THE WAY

When SSJID tried to force PG&E to sell its local poles and wires through eminent domain, the company punched back with lawsuits.

"We had the local approval we needed to purchase PG&E's assets," Rietkerk said.

But the plan hit a snag: All those poles and wires generate about $1 million dollars a year in local property taxes from PG&E. The water district’s plan was to cover that loss by paying local governments the difference.

"They made the argument that we constitutionally can't do that," Rietkerk said. "I would say it's a technicality."

The water district lost at the district level and appealed to a higher court. PG&E blocked that appeal by filing for bankruptcy, which comes with an automatic freeze of all lawsuits.

SSJID and others have made bids in bankruptcy court to buy portions of PG&E's grid, but the company has so far rejected all offers.

"PG&E's facilities are not for sale, and changing the structure of the company would not create a safer operation," PG&E said in a written statement to ABC10.

"PG&E is PG&E. It's a culture that has not changed. It's not going to change," said Jeff Shields, who ran SSJID before Rietkerk's tenure.

Shields points out there are 45 municipal power utilities in California and "none of them have felony convictions."

WHAT HAPPENS TO PG&E WORKERS?

Apart from the company's own words, the most visible opposition to the idea of a takeover has come from labor unions representing PG&E workers.

Wiener says his plan aims to keep the same wages and benefits for PG&E's workforce.

"We need to make sure that that all of the union contracts with PG&E workers simply transfer over to the new entity," Wiener said. "We don't want to impact the workforce in any way. And there's no need to. Whether it's a privately owned utility or publicly owned we still need this workforce."

One possible way to accomplish that would be to model the takeover of PG&E after what happened to the now-defunct Long Island Lighting Company in New York.

In the 1980's New York's legislature decapitated — figuratively speaking, of course — the management of the utility by replacing it with a government authority.

The line-level employees became employees of a third-party company hired under a management contract by the authority.

"The employees today of PG&E, they're not the problem... they're doing what their management tells them to do," said Barry Moline with the California Municipal Utilities Association. "The majority of PG&E's 24,000 employees could stay in a private company that is beholden to and serves a few hundred senior managers."

PG&E DECLINES TO SAY WHY IT DESERVES ANOTHER CHANCE

PG&E declined repeated requests to be interviewed for this story, but provided the following written statement:

PG&E is committed to delivering safe and reliable gas and electricity to the 16 million people we serve. It is our primary responsibility and our core business. PG&E’s facilities are not for sale, and changing the structure of the company would not create a safer operation.

We remain firmly convinced that a government takeover does not serve the interests of all customers in the communities we serve. We remain focused on fairly resolving wildfire claims and exiting the Chapter 11 process as quickly as possible. PG&E is committed to working with all stakeholders to make the necessary changes moving forward to build a stronger and safer PG&E and be the company our customers and communities want and deserve.

The statement does not address a core issue raised by PG&E's critics, who argue the company's history of crimes and safety problems shows it does not deserve any more chances.

"PG&E has had many opportunities to to get its act together, and it hasn't done so. And then when it tries to get its act together, its way of doing it is to turn off the lights for millions of people causing a lot of harm," Wiener said. "It's a company that has proven over and over again that it should no longer have the privilege of operating as a monopoly investor-owned utility. That's a privilege. It's not a right."

ABC10 asked PG&E to address this criticism, sending the question: "Given PG&E's history of federal crimes, deadly disasters, and substantially higher-than-average rates: why does PG&E deserve another chance right now?"

In response, a PG&E spokesperson resent the same written statement that appears above.