Paradise residents could be kicked off their own property if they don’t have plans to rebuild by Sept. 30 | ABC10 Originals

The town council set the deadline, despite the fact PG&E settlement and government grant money is not yet available to Camp Fire survivors who lost their homes. 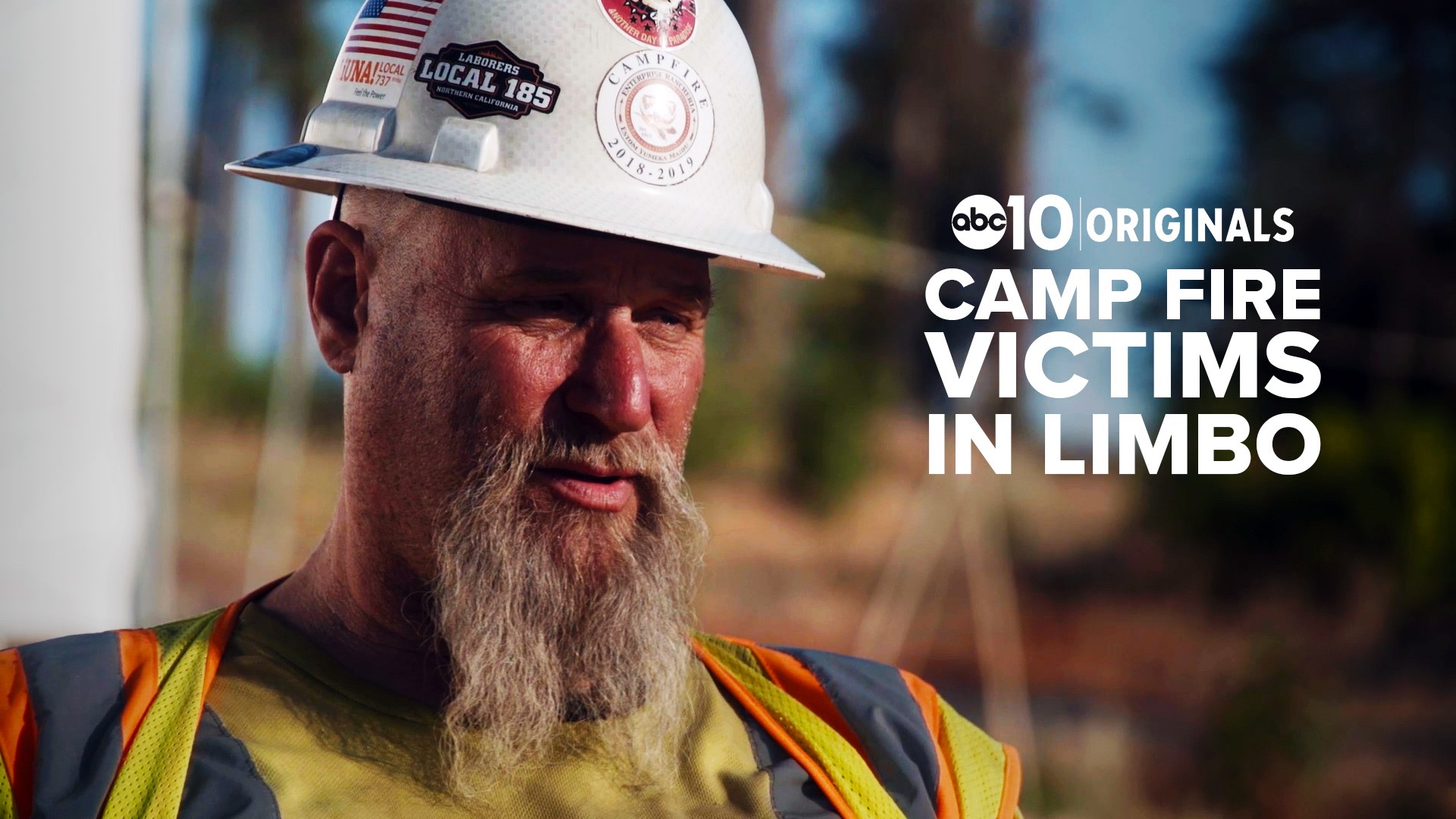 PARADISE, Calif. — Unlike most cities in California, residents of Paradise have been given special permission to live on their land in RVs since the Camp Fire destroyed the town in November 2018.

That’s because of an “urgency ordinance” the town passed in the months following the fire. However, the Paradise City Council voted in May 2021 to end the ordinance Sept. 30, 2021. Now, many people feel caught between a rock and a hard place.

Lawrence “Larry” Graham has been living in an RV since his home was destroyed in the Camp Fire.

“There was a 3-bedroom, 2-bath right here. Then right here there was a 3-car garage,” Graham explained, gesturing to what is now a dusty, gravel driveway where he repairs cars to make ends meet. “Right now, I’m just thankful I have land I can call my own. The thought of being kicked off it is killing me."

Graham is in good company. Following the fire, over 600 people applied for permission to live on their land while they worked to pick up the pieces of their shattered lives.

“My son had died in a car accident in 2015 and I moved here to restart and start a new life," Graham said. "I sold everything I had in the Bay Area and came here. Now since the fire, I lost everything. I even lost my son’s ashes, all his pictures, everything to do with my son is gone. And it’s, I mean that alone is weighing hard on my heart. But the extra pressure the town is putting on me, I just don’t know what to do."

Graham spoke out at the Paradise Town Council meeting on May 11 when the Paradise Town Council voted to set the Sept. 30 deadline. After that date, people must move forward with plans to rebuild or leave their own property. There are six qualifications that allow residents to continue to live in their RVs past the Sept. 30 deadline, until Dec. 31, 2021. According to the new ordinance, those qualifications are:

It’s unclear if these qualifications will allow residents to stay past Dec. 31, 2021.

“I don’t understand why," Graham said. "What’s the purpose? Because they have the power they’re showing their might? They can do it and they’re going to do it? Well then they have no compassion, no heart."

Graham did not have insurance when the fire struck. He said it’s something he regrets every day. He said he understands when people say he should have had it.

Steve “Woody” Culleton is a Paradise Town Council member. He does not agree with the decision to set a Sept. 30 deadline.

“The town exists to serve its citizens. And those of us in trailers and in homes that are coming back, it’s our town," Culleton said. "And they serve us. We don’t serve them."

Culleton was one of three of the five members of the council who wanted to push the deadline back to the end of the year, or further if possible. While three votes would be a majority under normal circumstances, the urgency ordinance needed four votes to change it, and two wouldn’t budge. Those two were councilmember Jody Jones and councilmember Greg Bolin.

“Know that we’re damaged. We’re tired. We don’t need another hurdle to jump. We’ve been beat up. We’ve been drug through the wringer. Why do I have to battle town hall to come home," Culleton asked.

He knows one of the main reasons some in Paradise want the urgency ordinance to end is to stop those who are not in compliance with code, and people who are abusing the system, creating a public nuisance, health hazards and/or eyesores.

“We’ve got bad players, but we’ve got the tools to deal with bad players," Culleton said. "In the meantime, we have a bunch of damaged citizens and we need to do everything we can to help them."

Culleton explained how different daily life is for people who experienced the trauma of the Camp Fire.

“That fire changed people, it didn’t just take our stuff. It affected every one of us. It changed us," Culleton said. "We are suffering from PTSD, depression, what have you. And we’ve watched the abuses by FEMA and PG&E.”

“I’ve experienced some of it myself," Jones said. "Your brain is kind of foggy and going through the processes you have to do to apply for money, apply for loans, apply for building permits. It takes longer and it’s harder to concentrate on."

Jones said she has taken the trauma into account when setting the urgency ordinance deadline. She said many people want to see things change in Paradise.

She said that come September, if they don’t have a plan, they will be required by the ordinance to find another place to live.

Some in Paradise say they’re suspicious of the motives of the councilmembers who voted for the September deadline, alleging there are business interests at play. Jones said the allegations are not true.

ABC10 also reached out to councilmember Greg Bolin, the other councilmember who voted to end the urgency ordinance. Bolin said he couldn’t even wrap his head around allegations of personal business interests.

“To say I’m doing this for an ulterior motive is void of any critical thinking or logic,” Bolin said.

“If they’re working with our housing advocates, they don’t have to leave in September. We’re trying to do what we can," Jones said. "At the same time, people need to move forward."

David Breed lost his home in the Camp Fire and now he’s one of the people rebuilding the town.

Breed said he has jumped through hoops to meet requirements imposed by the city such as having water, electricity, and waste removal.

“I’ve tried to do everything that’s required to meet any standards set by the town to simply be able to stay on my property until I can rebuild,” Breed said.

Breed, like many others in similar situations, says they’re waiting to see what happens with the PG&E settlement and grant programs intended to help fire survivors.

Most believe survivors should know about PG&E payments by the end of the summer. As for grant programs, that money likely won’t materialize until 2022.

“I don’t want to live in a burned-down shanty town with sewage leaking out," Breed said. "I mean if there are code violations, then, by all means, let’s deal with each individual case. Do I think it justifies a blanket response for everybody? No, I don’t."

When Breed was asked if he likes living in an RV with his wife and 13-year-old son, he laughed heartily.

“Uh, no,” he said unequivocally.

Steve Crowder is the current mayor of Paradise. While he was originally in favor of extending the urgency ordinance to the end of 2021, he changed his vote to the end of September to prevent a prior deadline of June 30 from remaining.

“This is not something that pre-fire could have happened. You were not allowed to live in an RV. Nor in any other city in California can you live forever in an RV. This was always a temporary ordinance,” Crowder explained.

Crowder lost his home and his business building during the Camp Fire. He responded to comments some in Paradise have made about the town council being out of touch because they are more privileged.

“I’ve heard this story about the privileged council and that one just plain flat-ass pisses me off," Crowder said. Because I suffered as much loss as anybody."

He also countered claims the town council wants people off their land.

“The perception of the town wanting to kick people off their property is not the case. What the town wants to do is transition people from temporary housing to permanent housing,” Crowder explained. “At some point, we’ve got to start getting back to a normal town. And it’s not an easy decision for us to make. And it’s not a fun decision for us to make. But we owe it to the entire community to have compassion. I mean we’ve extended and I’ve heard people say on the same hand, ‘Why are we extending this ordinance?’ Well, because people still need it."

“Have patience. And more compassion. Give us a chance to see what we’re going to get on our payout from PG&E. I mean I can understand if we’ve already got the money and decided not to build and we’re just sitting here. But I’m not. I’m waiting. I’m barely surviving, and I’m waiting,” said Graham.