Homeowners are finding their insurance premiums outpacing their incomes, if they can find insurance at all. Who is responsible for the crisis? 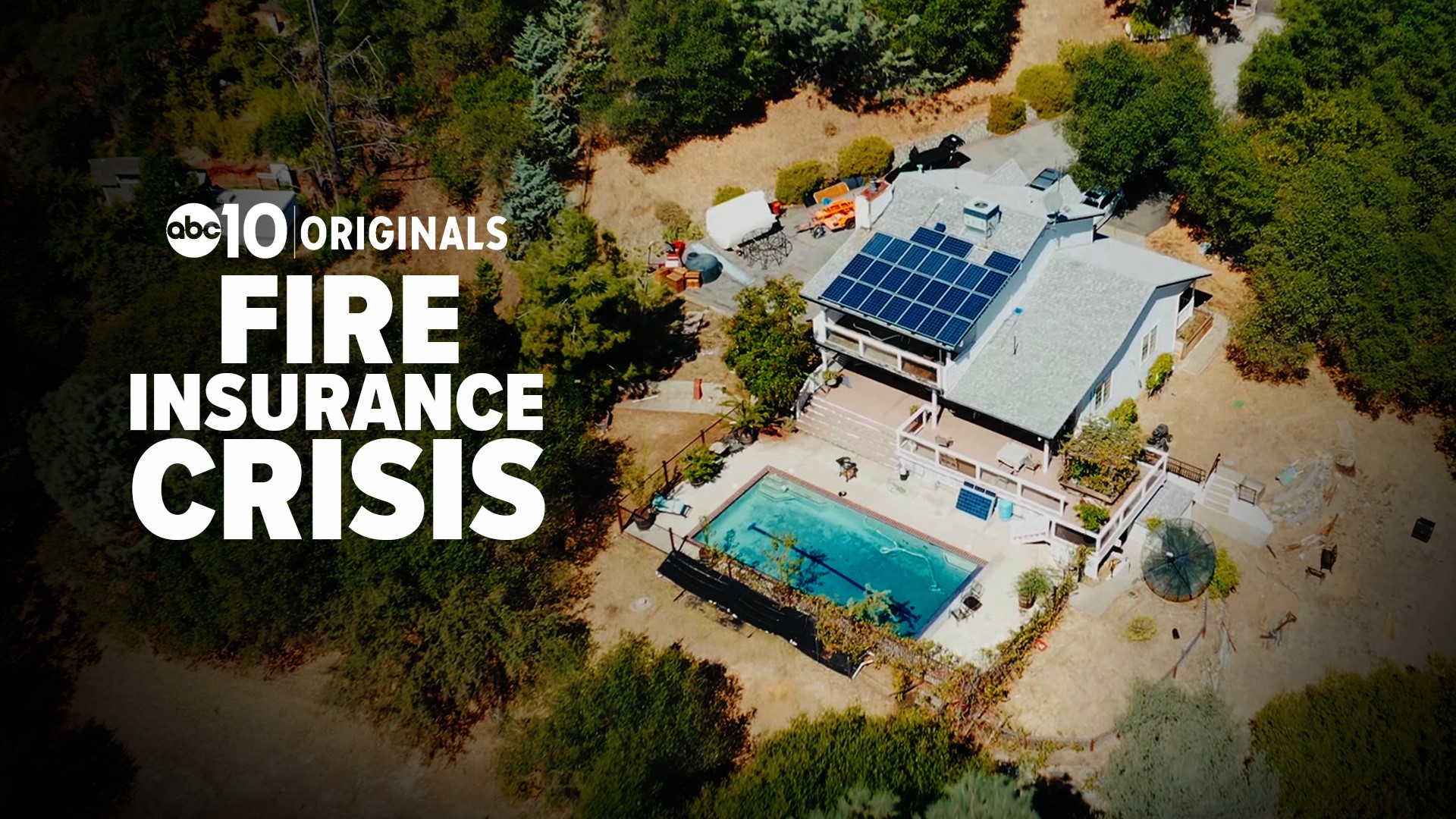 AUBURN, Calif. — A crisis has been building in the foothills of the Sierra and other fire-prone communities in California. It's related to the recent wildfires in the state, but may be just as much a product of technology as reality.

Homeowners are finding their insurance premiums outpacing their limited, sometimes fixed-incomes if they can find insurance at all.

Lon Milka and Sandra Purcell live in two very different communities in the foothills of the Sierra. Lon's home in Cool, California is in a gated, firewise community filled with highly-manicured, regulated properties. Sandra’s neighborhood, on the other hand, is characterized by dense scrub oaks and winding, friendly property lines.

"When I was going through my chemo, we were living here," explained Purcell. "I was diagnosed about a year after we bought the house. And chemo’s very challenging. It’s hard on the body and it’s hard on the spirit.

"And I have to say living here, in all this beauty, made a difference for me. I don’t know if I would have recovered as well if I lived somewhere else."

Credit: KXTV
Sandra Purcell stands on the deck of her home in Auburn.

Most feel the same. They came to the foothills for the beauty, for the trees. Now, they’re on the front lines of a looming crisis, united in their struggle to obtain consistent, affordable fire insurance for their homes. It’s an increasingly elusive necessity in California.

"We had one insurer when we bought this house in 2012, and we were with them for, I want to say, three or four years," Purcell said. "And then they opted to no longer to be in this market. So we had to find alternatives.

Eventually, Purcell did get insurance but only when it was paired with the California Fair Plan. The Fair Plan was created in the 1960s and is often considered to be an insurer of last resort. It’s an insurance pool created under the Insurance Code and all insurers selling insurance in the state of California must participate according to their share of the market.

When the California Fair Plan is used to buy fire insurance, and then that is combined with a traditional homeowners insurance policy for everything other than fire insurance, it is then known as a wrap or DIC. This stands for a "difference in conditions" policy.

Milka also knows the headaches of trying to obtain insurance. He saw his insurance premium rise 300% in 2019.

"Well, right now it puts us in quite the dilemma," Milka admitted. "And the dilemma is how much do we have to save this year to pay for insurance next year. So we’re continuously on edge."

Shelby Meyer is an agency producer with Farmers Insurance. She’s gained a reputation for being able to find insurance for near-desperate homeowners.

"What it is, there's a lot of companies out there that aren’t willing to accept the fire risk anymore," explained Meyer. "A lot of companies that have seen claims from the prior fires in the area are going insolvent because they just can’t afford it anymore. And so what we’re seeing is the high risk, high demand, high prices."

What also unities many homeowners in the foothills is their station in life. Many are on fixed incomes.

"My husband and I are, we met late in life," Purcell said. "We're approaching a retirement age. I no longer work because of cancer so we’re on a pretty strict income. This home is not only our home base but really, essentially in logical terms, it’s part of our retirement."

The rising insurance premiums are making people re-think their futures.

"It kind of throws a wrench in the whole plan," admitted Purcell. "As an example, when we bought this home, I think we were paying about $1,300 a year for our home insurance and that was in 2012. Most recently, the highest quote we received was $7,000 a year.

RELATED: Wildfire victims could own 20% of PG&E, but not for long

"That’s the difference. We didn’t go with that one thankfully. But even the one we had to go with, you know, it was quadrupled by about three or four times what we started out paying, which was just a few years ago."

People who live in communities removed from the pressures in the foothills often believe smart fire planning can make insurance cheaper and more accessible. Yet, Lon Milka knows better.

"You can take as many steps as you want, firewise, defensive zones, whatever it may be, and the insurance companies will drop you no matter what," said Milka. "So they’re abandoning it. It’s a crisis in the state of California. They’re abandoning us and we’re not getting a whole lot of help from our government and our state government."

He’s right. In California, there is no requirement that an insurance company reward its customers for clearing brush, removing trees or hardening their homes against fire.

"Help making your house more firewise is going to help in the worst-case scenario, whenever the fire is on its way, obviously," explained Meyer. "But the firelines determine where you’re at regardless of what position your house is on the hill or anything like that."

Credit: KXTV
Amy Bach is the co-founder of United Policyholders.

The concept of a fireline score is still confusing to many. However, Amy Bach knows them well. She co-founded a non-profit that advocates for the insured called United Policyholders back in 1991.

She's frequently consulted on policy matters in California and around the country.

"In terms of price setting and evaluating risks, again there's something called the fireline score," explained Bach. "These days it's all tech-driven. So you know, you go into an insurance agent's office to buy home insurance and he or she is just going to plug your information in and run a program. It's going to spit out a quote. So technology has replaced a lot of the human element in insurance."

Amy says her organization first noticed the emergence of fireline scores in 2016, around the time 100 million trees died during the California drought crisis.

"We knew that the fireline score was changing the landscape quickly," said Bach. "And so you know, now it turns out I think it's a driver of the crisis. There's no question because what it is is, just like a credit score, it makes it easy for an insurance company to put you in the 'toss' bin instead of in the 'keep' bin. And that seems to be a big part of the problem."

"I think it's very frustrating to people because, you know, they can be on one side of the street and have a fireline score of five, and they could be on the other side and have a fireline score of 10," explained Bach. "There's not necessarily rhyme or reason for that and that's because, when you rely too heavily on formulas and machines and not enough on common sense, you can get those kind of funky outcomes."

Still, those numbers mean everything when it comes to insurability.

"I talked to an insurance agent in Placer County just last week who told me that one of one companies that he has worked with will insure a home only if it has a one to five score," said Bach. "But once it gets to six and above, they won't touch it. He has another company that will take a six and below. But generally the insurers seem to be taking a very conservative view of the model where they will only insure homes that have that very low score."

Bach said the California Department of Insurance hired a consulting firm to look at the fireline model and they concluded there was nothing wrong with it, but it’s just one piece of information.

"It needs to get paired with other pieces of information and not used as the sole [reason to insure or not]" explained Bach. "And now it is."

Bach said she expects the legislature to step in this session.

"Insurers have been allowed to create this chaos," said Bach. "And I think there's a statewide recognition that we can't we can have this."

Amy said the legislature can do three things right now to help:

For many though, help can’t come soon enough.

“It’s terrifying to think this thing that is, it’s your home,” said Sandra Purcell as she gazed at her sun-soaked deck. “It’s everything that you need. It’s your home base. It’s your security. And it could be taken away from you.”