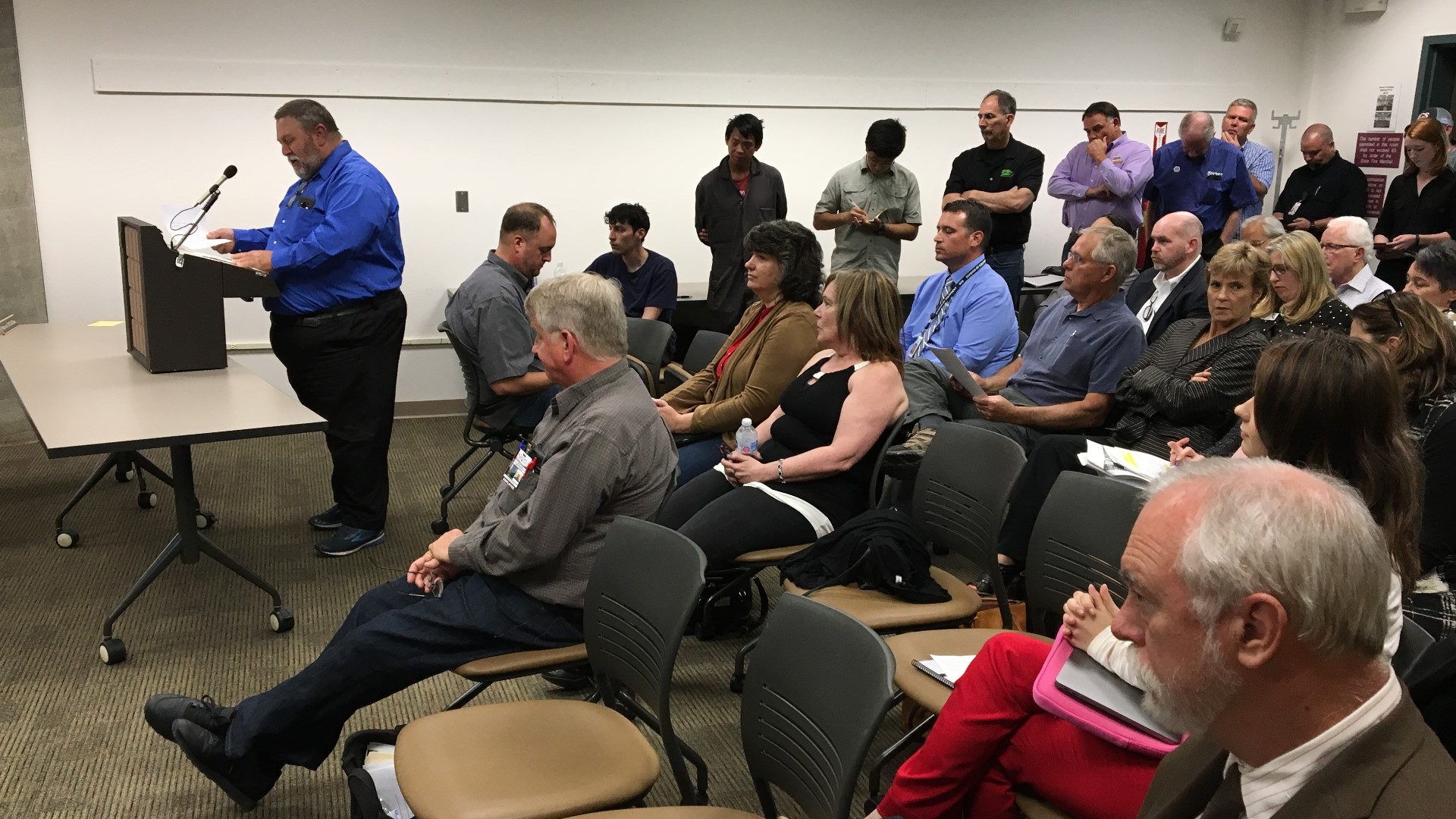 GRASS VALLEY, Calif. — At its meeting Tuesday, the Sierra College Board of Trustees voted to deactivate the school’s automotive technology program.

People who spoke at the meeting in favor of keeping the program running said they worry that suspending the program – even temporarily – would hurt students in Placer and Nevada counties working to become auto mechanics.

In a classroom-sized meeting room on Sierra College’s pine tree-dappled Nevada County campus in Grass Valley, dozens of people packed in Tuesday afternoon to weigh in on the matter.

The school wants – and trustees granted them the permission - to press "pause" on the program in order to update the curriculum and add more technology classes—to keep up with trends in the auto field.

It’s a process the school calls Program Vitality, in which Sierra College can temporarily suspend a program in order to assess and revitalize it. The college has four campuses: Rocklin, Nevada County, Tahoe-Truckee and Roseville, and this change in the automotive technology program applies to students at all of them.

Amy Schulz, dean for the Division of Business and Technology, said the school’s automotive program is outdated and needs new-and-improved equipment and curriculum.

“We need an infusion of investment within the facilities and equipment, but before doing that, we need to know what to invest in,” she told ABC10.

Currently, she said, there are 130 students studying automotive technology at Sierra College. The school will accept no new students into the program for now. Those who are within a year of achieving their certificate or degree may continue on at Sierra College. For the others, however, the school is working on options.

"We've been working closely with the other colleges and also with our counselors to work with each student on what their student ed plan is,” Schulz explained. “If they're not able to do it over the next year, then what are some other alternatives, like transferring to another institution or changing majors?"

For automotive student Kaytelyn Croghn, who is deaf, transferring schools isn’t so simple.

“Automotive is a really hands-on major. Like, it’s a really perfect opportunity for deaf students to have a future in the community and have the ability to get a job,” she told ABC10 through an interpreter, “so if they put this certification, these degrees on hold for automotive, the time isn’t on our side for us, especially as deaf students.”

She said people in the deaf community have higher barriers to employment and other opportunities.

“It’s not fair for us, as deaf, to just like, ‘Oh, you have to go somewhere else,” she said. “We want to stay in our community. We want to stay at our college, where we have our best services, where we have interpreters, we have a program, we have access, we have teachers that support us. We have everything here, and it’s not the same to just say, ‘Oh, go to a different college. Just go over there, they have programs.’”

She said Sierra College has provided her with excellent services, including interpreters. She transferred to the school from another college that, she said, didn’t provide her with the same level of services.

“When I transferred here, into this program at Sierra College, everything worked out really well,” she said.

When she learned news of her program’s possible suspension, she thought, “‘Again?? This is going to come and thwart my education again??’…I started roughly two years ago, and so I’m getting pretty close to the end and they’re like, ‘Oh, no, you can’t have that.’”

She now wonders where she’s supposed to go.

Supporters who spoke in favor of the program’s continuation at Tuesday’s meeting included instructors, students, parents, a representative from Caltrans and local auto businesses.

The Caltrans representative told the board that Caltrans counts on graduates from local community colleges’ automotive technology programs to help fill its workforce.

However, Schulz said, the job market has more workers than open positions.

“There’s approximately 600-or-so openings a year with about 800 trained technicians available to take those openings,” Schulz said, citing numbers from the Center of Excellence, where California community colleges get their labor market data. “That was really influential in the decision of the recommendation for the program vitality committee.”

Plus, she added, Sierra College in recent years has only graduated between 12 and 17 automotive technology students annually, so the program there isn’t as large as the ones at other community colleges in the Sacramento region, which each graduate more than 100 per year, she said.

She and other Sierra College leaders hope the revitalized automotive technology program can open by the fall of 2020 and offer training in a niche in the field that no nearby community college is offering.

“We have invested a lot into advanced manufacturing and mechatronics and robotics, and so we have programs that we could build off of, that could be influential in advanced transportation and automotive,” Schulz said.

Addressing the room at Tuesday’s meeting, Sierra College President William Duncan said, “our (automotive) program is a mess right now, quite frankly,” admitting that grads are getting jobs, “but it’s not a stellar program. It’s not on par with what Sierra College wants it to be.”

Don Moore also attended the meeting. He’s one of the program’s eight part-time instructors who stands to lose his job, although he said he is still contracted through at least this upcoming fall semester.

He said he’d like to see the program get a facelift while remaining open.

“I sure hope, from the bottom of the heart, that they really want to continue the program,” he told ABC10. “We still need to understand the basics, the fundamentals.”

A trustee asked Schulz why the program can’t stay open during the vitality process.

“It’s an outdated program and it needs an infusion of investment,” Schulz told the board.

The school hopes to have a recommendation for trustees about the program by the end of the fall semester. Then, curriculum could be written and the program redesigned throughout the spring of 2020, with classes possibly ready by fall 2020.

Croghn, who is still several semesters away from graduating and faces displacement from this program, feels let down by this decision.

“It feels like they’re saying, ‘Oh, you don’t mind just holding, put your life on hold. Don’t get a job, it won’t even matter. Just wait for our time,’” she said. “We need a job to survive. We have bills, we have to take care of our lives. We can’t just stand around and wait for them to figure out what to do with our major.”

Other programs the Board of Trustees voted to make changes on are HERE.