The fire, burning in the Fremont-Winema National Forest, tripled in size over the weekend. 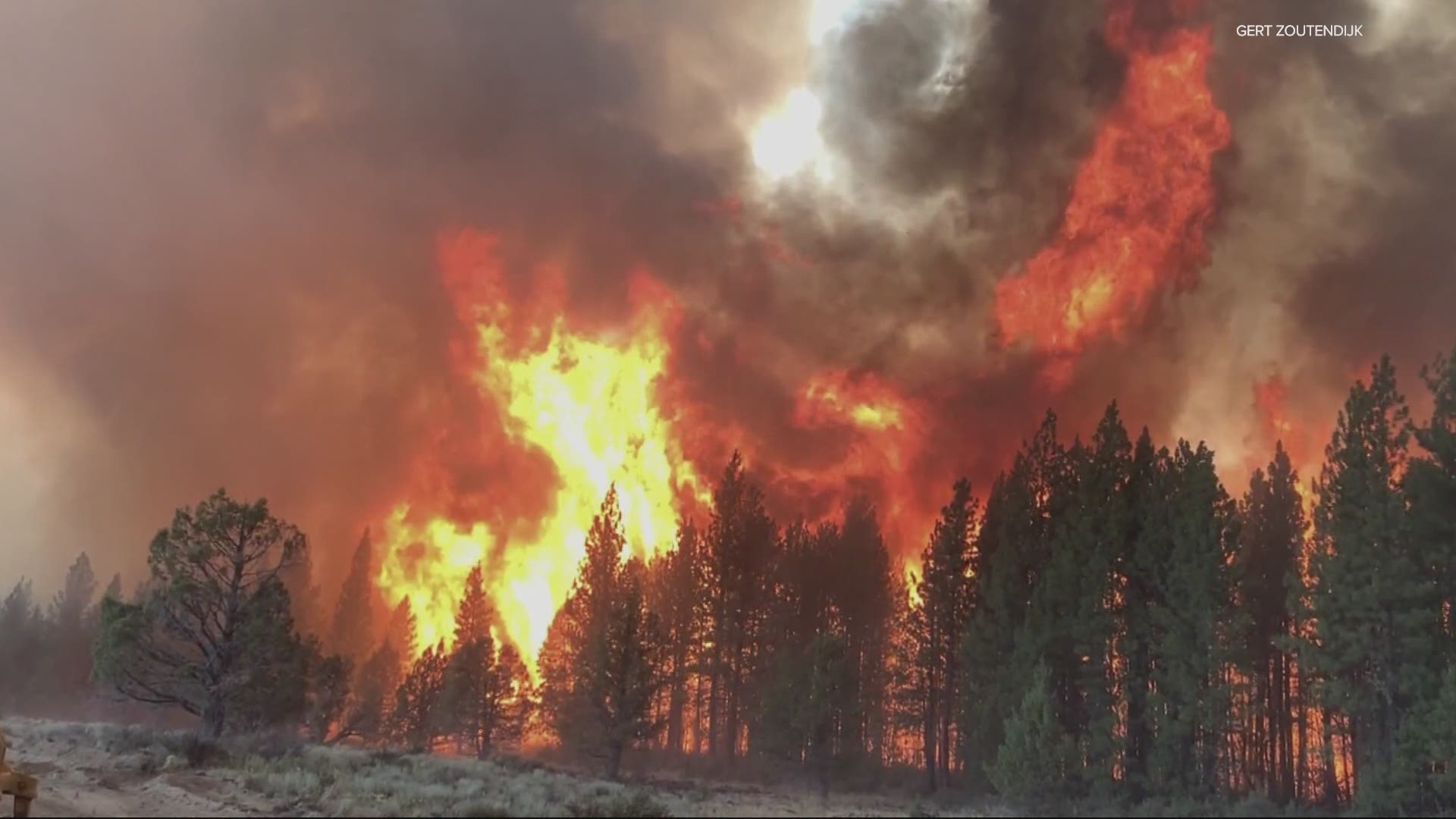 CHILOQUIN, Oregon — Editor's note: Click here for the latest information on the fires burning in Oregon and SW Washington

The Bootleg Fire in Klamath County, after doubling in size from Saturday to Sunday, grew by another 10,000 acres overnight and has now burned 153,535 acres, as of Monday morning. The fire, burning in the Fremont-Winema National Forest and on private land, is 0% contained.

"The fire behavior we are seeing on the Bootleg Fire is among the most extreme you can find and firefighters are seeing conditions they have never seen before," incident commander Al Lawson said over the weekend.

Conditions got to a point Saturday that firefighters had to disengage and move to safety zones.

The Klamath County Sheriff's office is now also citing or arresting people who stayed in the Level 3 evacuation areas or who are trying to go back in to those areas. The sheriff's office warns there's a high probability of more evacuations in the area.

Level 2 (GET SET): In Klamath County near the town of Sprague River, Klamath Forrest Estates/Moccasin Hills Area, the west side of Godowa Springs Road, south of Oregon Pines Road and Tableland Road to the river.

There is an evacuation shelter for the Bootleg Fire set up at the Klamath County Fairgrounds, located at 3531 South 6th Street in Klamath Falls.

For the latest information on evacuations, people are encouraged to visit the Klamath County Facebook page, this evacuation map or sign up for alerts.

Oregon's second-largest wildfire, the Jack Fire east of Roseburg had burned 10,937 acres and was 10% contained, as of Sunday afternoon. Forest Service campgrounds were also under mandatory evacuations, including Apple Creek, Horseshoe Bend and Eagle Rock.

Although many people have been evacuated, the fires are burning in remote enough locations that impact to human life and property has been somewhat limited, the Statesman Journal reported.

That could change, according to Gert Zoutendijk with the Oregon State Fire Marshal’s incident management team.

On Friday, Zoutendijk told KGW about 3,000 homes and structures were being threatened by the fires with Level 2 and 3 evacuation orders in place.

Gov. Kate Brown in late June declared a state of emergency because of what she called the imminent threat of wildfire across the state and has declared emergency orders on both the Jack and Bootleg fires.

Smoke from the growing blazes moved to the north on Friday night, giving people on the edges of the Willamette Valley a view of the haze being produced by the two fires in southern Oregon.

However, northwest Oregon’s air quality was not expected to be impacted over the weekend and it wouldn’t be until Monday morning that there might even be a chance of some haze, National Weather Service meteorologist John Bumgardner said.

It’s a different story in southern Oregon, where the air quality monitors have already dropped to “moderate” in the Klamath Falls area. See a smoke outlook for the South Oregon Cascades (Jack Fire) and South Central Oregon (Bootleg Fire).

1 / 10
Lake Oswego Fire Department
The Bootleg Fire is threatening thousands of homes in Southern Oregon. As of Friday, July 9, the fire had grown to 38,892 acres, doubling in size in 24 hours.