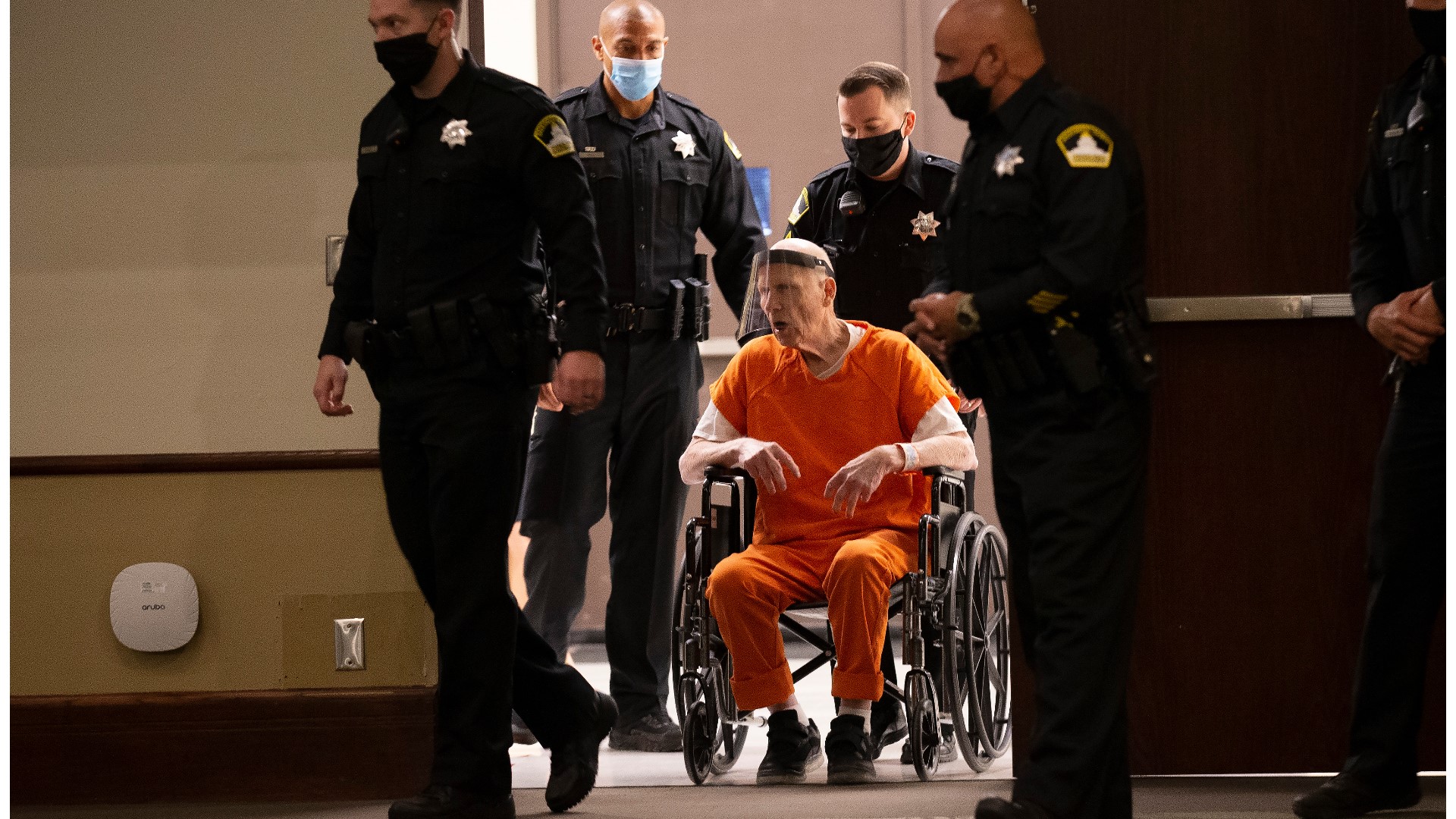 SACRAMENTO, Calif — After eluding authorities for more than 40 years, appearing in court on Monday as a frail, older man wearing a face shield due to the coronavirus, Joseph James DeAngelo Jr. pleaded guilty at Sacramento State to 13 counts of murder and dozens of rapes.

DeAngelo's guilty plea was an agreement that would give him a life sentence with no chance of parole, and in doing so, evading the death penalty.

California district attorneys from counties in which DeAngelo had his crime spree reacted to the hours-long DeAngelo hearing that detailed the horrendous rapes and murders he committed across the state.

After Sacramento County District Attorney Anne Marie Schubert listened to DeAngelo speak to law enforcement officers following his arrest years ago, she said she learned that he was not just the Golden State Killer or the East Area Rapist.

Schubert said DeAngelo is the "real-life version of Hannibal Lecter."

"He is a cruel, intelligent, sadistic serial killer. He is a pure sociopath, he is a master manipulator," Schubert said. "Then we have today, perhaps for others, that light came today that we now move this monster, not simply being caught but now standing convicted."

"In this case, we know justice did not move swiftly; it has taken a very long time,"  Becton said. " However, our victims remain steadfast and brave throughout this entire process. Today is about remembering all the victims in this case and finally to hold DeAngelo responsible for these crimes."

Santa Barbara County District Attorney Joyce Dudley said, as a prosecutor, she has 30 years of experience looking into the sadness in the eyes of victims that it almost seems as if something inside them died.

Dudley said she saw sadness and rage in the eyes of DeAngelo's victims in the courtroom.

"Then, I also saw signs of peace as I walked around and looked into some of those crime victim's eyes and their loved ones. I hope that is a catalyst to the beginning of their healing process."

Ventura County County District Attorney Gregory Totten said he still believes DeAngelo deserves the death penalty, but that it did not serve the interest of victims and their families.

DeAngelo would have most likely died in prison awaiting his trial or his execution, Totten said.

"The victims, in this case, lived for far too long with this trauma, they suffered for too many years," Totten said. "Simply put, they deserve to see {DeAngelo] die in prison as a convict and not simply the accused."

1 / 9
AP
Joseph James DeAngelo, charged with being the Golden State Killer, is wheeled into the courtroom in Sacramento, Calif., Monday, June 29, 2020. DeAngelo, 74, pleaded guilty to multiple counts of murder and other charges 40 years after a sadistic series of assaults and slayings in California. Due to the large numbers of people attending, the hearing was held at a ballroom at California State University, Sacramento to allow for social distancing. (AP Photo/Rich Pedroncelli)

Orange County District Attorney Todd Spitzer said the Golden State Killer case was troubling for him because it did not fit "God's plan" where parents shouldn't have to bury their children and that children shouldn't have to hear someone murder their parents in the other room.

[The case] still impacts the community today,' Wise said. "For many, it is a memory that they wish to forget but a memory that will not fade away."