The California fairgrounds that act as the stage for the local fair and shelters for wildfires are staging a write-in campaign to get support and survive into 2021. 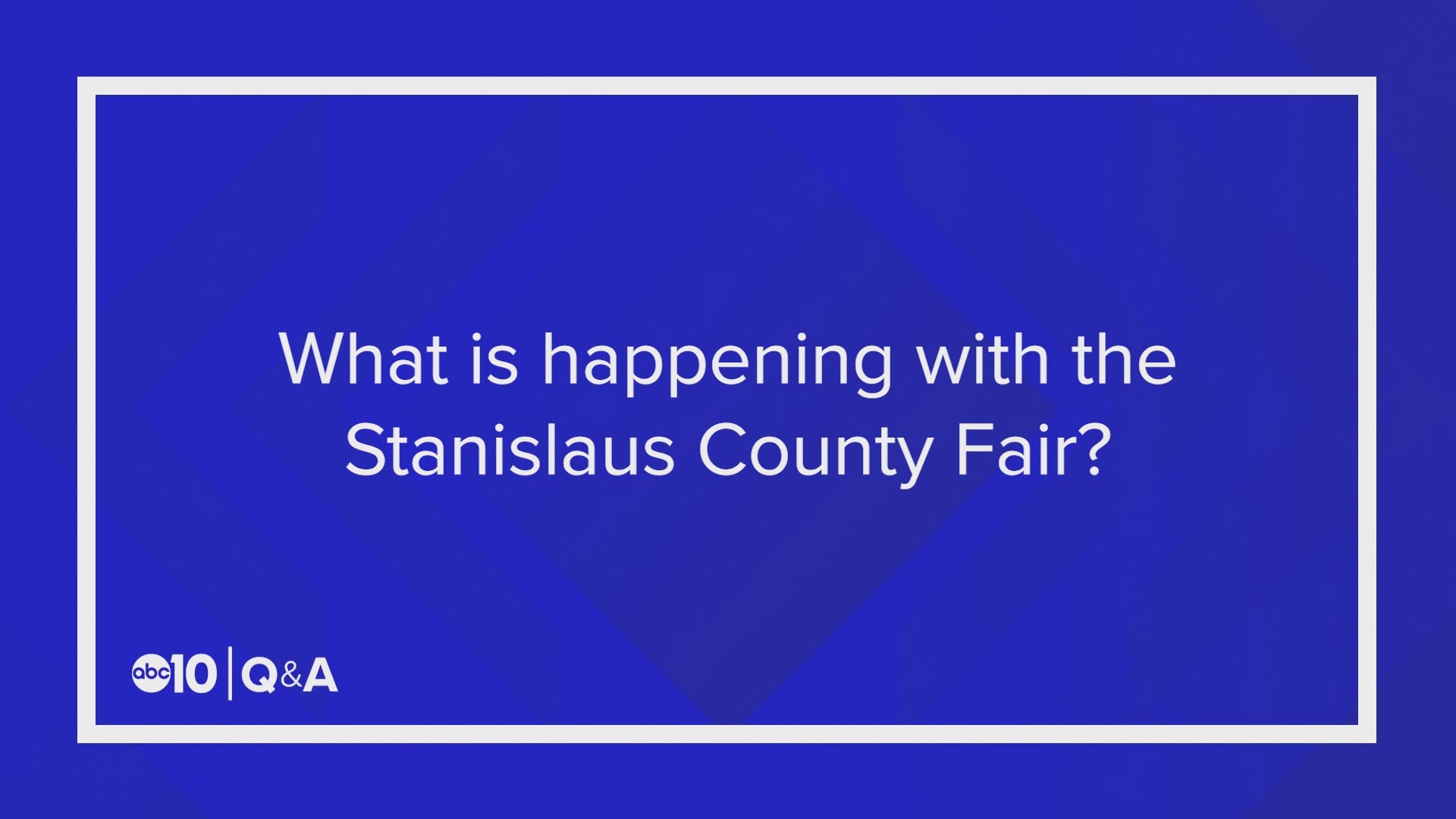 CALIFORNIA, USA — California fairs are trying to rally a campaign for state funding so they can survive into 2021. Revenue streams have been dried up for months, and with reopening walk backs in some counties, some have largely given up hope that any large events will come about this year to recoup losses.

“I don’t see any large event taking place through 2020. I don’t see any county fairs going off in 2020,” said Matt Cranford, CEO for the Stanislaus County Fair. “I think we’re all resigned to that fact.”

The shutdowns, restrictions, and stay-at-home orders brought the operations and annual fair at the Stanislaus County Fairgrounds to a halt. The annual fair is where the lion’s share of revenue for the fairgrounds is generated every year, anywhere from 65% to 75% of their $1.3 million budget, according to Cranford.

Usually booked 50 weeks out of the year, the fairgrounds plays host to dog shows, swap meets, car shows, roller derby practices, crab feeds, and various fundraisers. With the impact of the coronavirus, those events and the money they generate aren’t there anymore.

“With COVID and this shutdown and this sheltering, we’ve basically shutdown all of our events, everything we do,” Cranford said.

State and county reopenings in past weeks might have raised some hopes for socially-distanced events later in the year, but recent walk backs in counties like Sacramento, San Joaquin and Stanislaus moved the goal post further out of sight for the industry.

RELATED: How the local fair went from cattle show to deep-fried Oreos

“It was a little bit of a tease to say that things might be opening up again and we might be able to get back to some business, but we also understand that fairs and large-scale fair events are not likely through the 2020 season,” said Sarah Cummings, CEO of the Western Fairs Association. “I think we’ve resigned to that fact. We understand that.”

The larger events are how the fairs make their money. Cranford said they need around 10,000 to 50,000 people onsite during the fair to generate revenue.

Cummings said the current situation with the coronavirus has “crippled” the fair industry, one financially based on mass gatherings and one that she says has been struggling to survive since 2011.

She said the start of 2020 was supposed to bring much needed state funding to the industry, but the pandemic changed the landscape of the industry.

“Once again, we’re in crisis mode and we’re looking at how we as a fair industry can survive moving forward,” Cummings said.

That crisis pushed the Calling All Communities campaign, a write-in effort to garner support for the fairs. Cummings said anyone who heads to the website can get informed on the matter, and if comfortable, get all the information they need to reach out to their legislator and advocate for their local fair.

In the meantime, reserves for fairs are dwindling with no income to support them. Despite the lack of events and revenue, the fairgrounds and facilities still have to be maintained. Some fairs were also called on to become testing facilities and on-site hospitals, according to Cummings.

It’s not uncommon for these places to be used for emergency purposes. Fairgrounds have been previously been used by state or local agencies as shelters or staging ground for wildfires or floods.

RELATED: 'Some of California's fairs will be forced into closure' | Why some fairs won't make it to 2021

Outside of the emergency response, Cranford said the fairgrounds is also a boon for nonprofits like Rotary clubs, Kiwanis clubs, and the American Legion with their fundraising efforts.

“I had a lot of nonprofit groups call me up saying ‘hey, can we get in some way, somehow, for something. We have no money right now.’ I’ve had to turn them all away,” Cranford said. “That was probably one of the hardest things I’ve had to do was canceling the fair and knowing that these nonprofits wouldn’t make their budget this year.”

The Stanislaus County Fair was supposed to launch another 10-day run on July 10. Normally, Cranford would be looking at the needed changes, revisions, and entertainment lineups that would lead them into 2021 and land the commitments from the sponsors and vendors the day after the fair ends.

It's part of the work that landed the Stanislaus County Fair on the "Top 100" fairs in the country by the International Association of Fairs and Expositions.

Instead, he’s laid off his fair staff, cut programs, and cut use on the property.

“Right now, it’s me and two other staff people on-site, and we are just trying to get by,” Cranford said.

“We’re just in the conserve and survive mode,” he added.

The goal for the Calling All Communities Campaign is to secure funding and support for the California fair industry that would preserve the livelihoods and jobs of those who work at the fairgrounds, Cummings said. She added that a successful campaign means all 78 fairs in California host a successful fair in 2021.

ABC10 reached out for comment from the governor's office, but the message was not immediately returned.

Help Us Protect our Fairgrounds!

Fairgrounds are often the heartbeats of our communities, acting as a gathering place in good times and in times of crisis. Open to all members of our community. Fairgrounds are at risk of closing and not being available to our communities. What would our communities look like without our Fairgrounds? We need to take action now! We need Emergency Funding in the new package of Federal economic relief. Without support, many Fairs will close and the communities they serve will suffer. Click Thru www.callingallcommunities.org to learn more about how to send a letter to Congress and reach out to our elected officials. #callingourcommunities #californiafairs #WFAHeretoHelp #takeactionnow #saveourfairgrounds Rep. Josh Harder