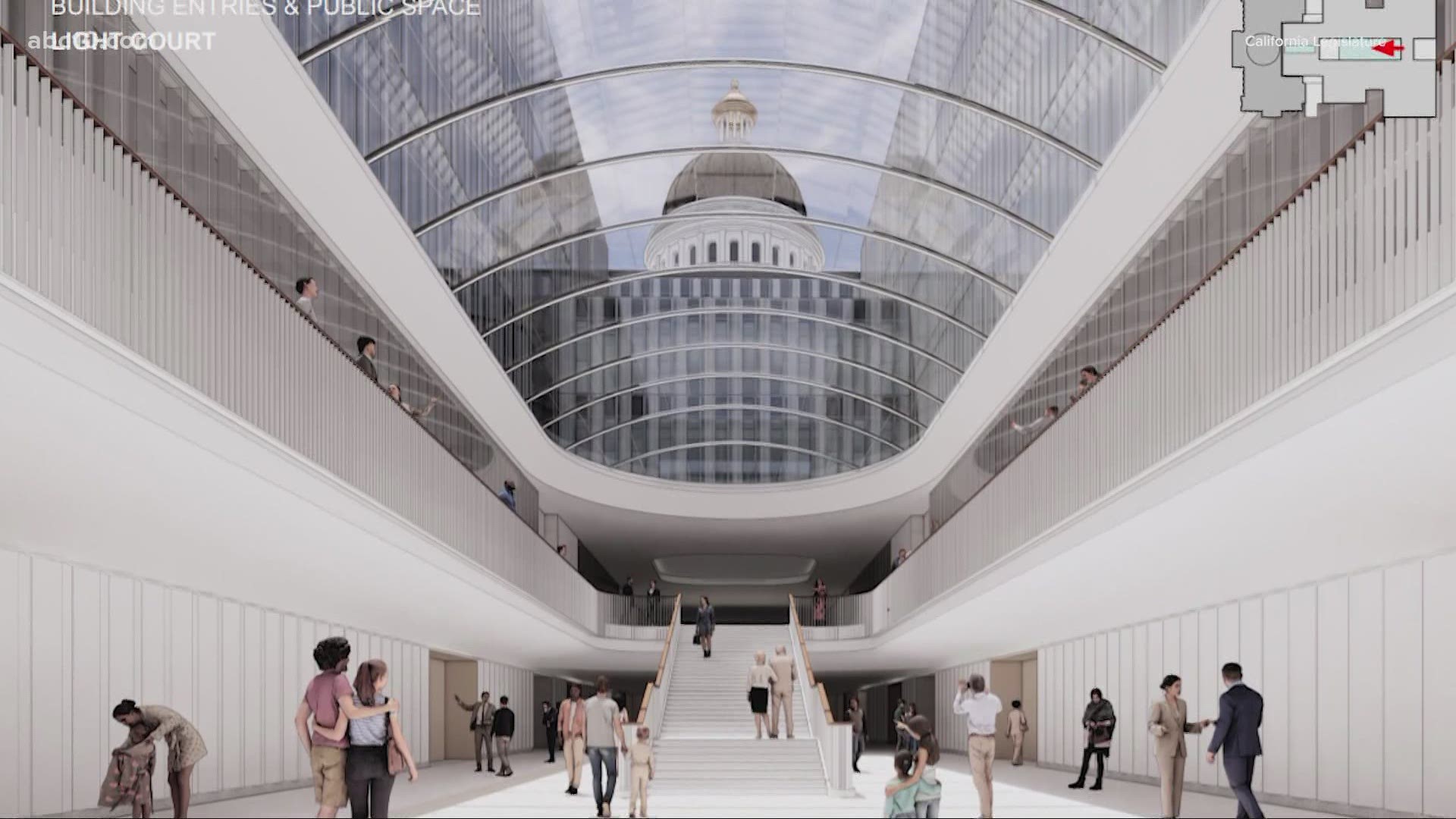 SACRAMENTO, Calif. — As California’s economy struggles to recover from the pandemic, state lawmakers are still moving forward with plans to give themselves more spacious offices by demolishing and replacing a part of the Capitol that was built in 1952.

The joint rules committee of the legislature unveiled new artist renderings of the design for a replacement of the annex building that houses the governor’s office and the vast majority of lawmakers.

The project’s exact cost is unknown, but critics believe it will be at least $1.2 billion.

The project has also received opposition because the larger footprint of the new annex building would extend into the existing arboretum on the East side of the Capitol.

Assemblymember Ken Cooley (D-Berkeley,) one of the lawmakers leading the project, said cadaver dogs and ground-penetrating radar had already been sent into the area because there’s potential construction that crews will dig up Native American burial sites.

“It's not ‘potential.’ We were here," said Jerome Encinas, who represents the United Auburn Indian Community.

Others oppose the project because historic and one-of-a-kind trees in the new building’s path would need to be uprooted to make room. Designers said they believe some of the trees could be relocated, but opponents warn some trees may not survive.

New designs were not presented, but the project also includes a visitors center that would be built in the plaza beneath the Capitol’s West Steps, altering the view of a site where countless political demonstrations have taken place.

The annex project comes as the Capitol complex is already set to receive more office space when a new state office building is completed at 10th and O streets.

During years of construction on the annex, that new building is supposed to act as “swing space,” housing all of the lawmakers and their staff members.

Opponents argue elected officials don’t need more space than that, especially in light of the economic damage done by COVID-19.

"I think we can all agree that a billion dollars can go a long way to helping our state," Bruce Lee with the Sacramento Taxpayers Association said.

Critics want lawmakers to delay the project and scale it back to be within the existing footprint of the building. They’re also calling for lawmakers to be open about the project’s budget.

Many of the problems pointed out by supporters of replacing the annex do not require a new building. Bent ducts, old pipes, and degraded insulation are all replaceable.

The annex building does have some more expensive problems like non-compliant access for wheelchairs and a lack of fire sprinklers.

Cooley said his hope is to finish construction on the new annex by late 2025.

California does not have more members of the legislature to accommodate, it's been made up of 120 elected members since the current state constitution was ratified in 1879.

1 / 12
California Legislature
California state lawmakers are considering a billion-dollar project to demolish and replace the 1950's annex on the East side of the Capitol building, which houses the Governor's office and legislator offices and hearing rooms. Supporters argue the structure is outdated, opponents argue a renovation of the existing annex is a better use of funds.