Here's when California theme parks are looking to reopen in spring

With the sudden announcement that amusement parks can reopen as early as April 1, Disneyland, Six Flags and other parks are sharing their plans. 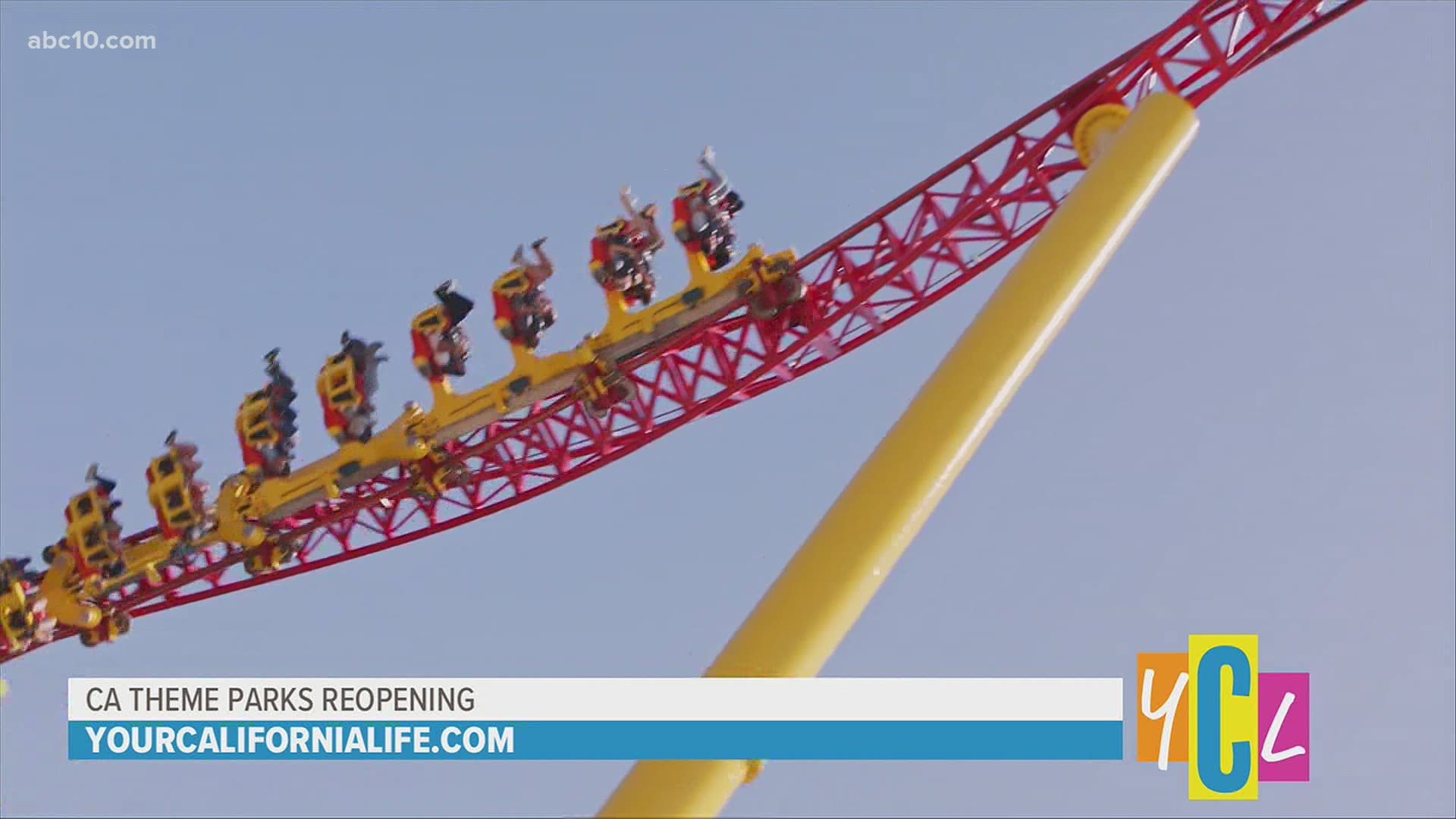 SACRAMENTO, Calif. — With the announcement that theme and amusement parks will be allowed to reopen soon in limited capacities, it seemed like the wheels would begin turning immediately to get California's favorite parks back in business.

Dr. Mark Ghaly, Secretary of California Health and Human Services, announced the change to the state's Blueprint for a Safer Economy on March 5, allowing amusement parks to open at 15% capacity in the red tier and in larger percentages in less restrictive tiers, beginning April 1. The changes come after many theme parks have been closed to the public for months due to the coronavirus.

And of course, Disneyland is one of the first parks to announce a somewhat tentative reopening timeframe of late-April.

"Here in California, we're encouraged by the positive trends we're seeing and we're hopeful they'll continue to improve and we'll be able to reopen our Parks to guests with limited capacity by late April, we look forward to publicizing an opening date in the coming weeks," Chief Executive Officer of The Walt Disney Company Bob Chapel said in a statement.

Since the release of that news, Disneyland officially updated their timeline, saying the park is shooting for April 30 to open with limited capacity.

Under current state guidelines, only California residents can attend the parks. All visitors ages 3 and up will require a reservation.

Some theme parks in the Sacramento area have already been open — Fairytale Town, Funderland, Quarry Park Adventures and Tree Top Sac — due to their small size and qualification as an outdoor activity.

Santa Cruz Beach Boardwalk recently announced it would reopen select rides on April 1, along with other theme parks in California. According to its website, the Beach Boardwalk will be open to those with season passes. Reservations are now open through April 11.

Six Flags Discovery Kingdom, which has a location in Vallejo and is the closest major theme park to the Sacramento area, recently announced rides are back April 1 for members, April 2 for members and season pass holders, and April 3 for everyone.

This is no joke😉. RIDES ARE BACK April 1 for Members, April 2 for Members & Season Pass Holders, & April 3 to everyone! 🙌🎢#TheThrillIsCalling pic.twitter.com/TZFMYr6f0K

"We are pleased by the state’s announcement today," a spokesperson said in a statement to ABC10 in early March. "Six Flags has extensive safety procedures in place at parks across the country and we have been safely hosting guests at the park since July of 2020 for The Marine World Experience. Our team members are eager to welcome guests back to Six Flags Discovery Kingdom with a full complement of our world-class coasters, rides, and animals in a safe, outdoor environment. An official opening date will be posted on our website and social channels in the near future."

Legoland announced it will fully reopen all resort rides at the Carlsbad, Calif. location on April 15. In the meantime, Legoland is having "preview days" starting April 1 to April 15, with some attractions open for priority access.

The resort kicked off its "Build 'N Play Days" on March 5. The limited-time event is scheduled to run through May 5.

In an statement just days before the announcement that amusement parks could reopen in the red tier on April 1, Legoland California Resort President Kurt Stocks said he was optimistic they'd be able to reopen in the near future.

"Obviously, we're waiting on Governor Newsom to give us the green light to fully reopen, but at this moment we are going out into the market and we are advertising quite literally hundreds of jobs that we will need filled as we get ready to reopen," Stocks said in the statement.

"We’re encouraged by the positive news coming out of the California Governor’s office today regarding the reopening of theme parks in the State," a spokesperson for Knott's Berry Farm said in a statement to ABC10. "We’re looking forward to seeing the specific details and guidelines in the coming weeks that will help inform our plans for reopening. We will provide updates to our associates as they come through."