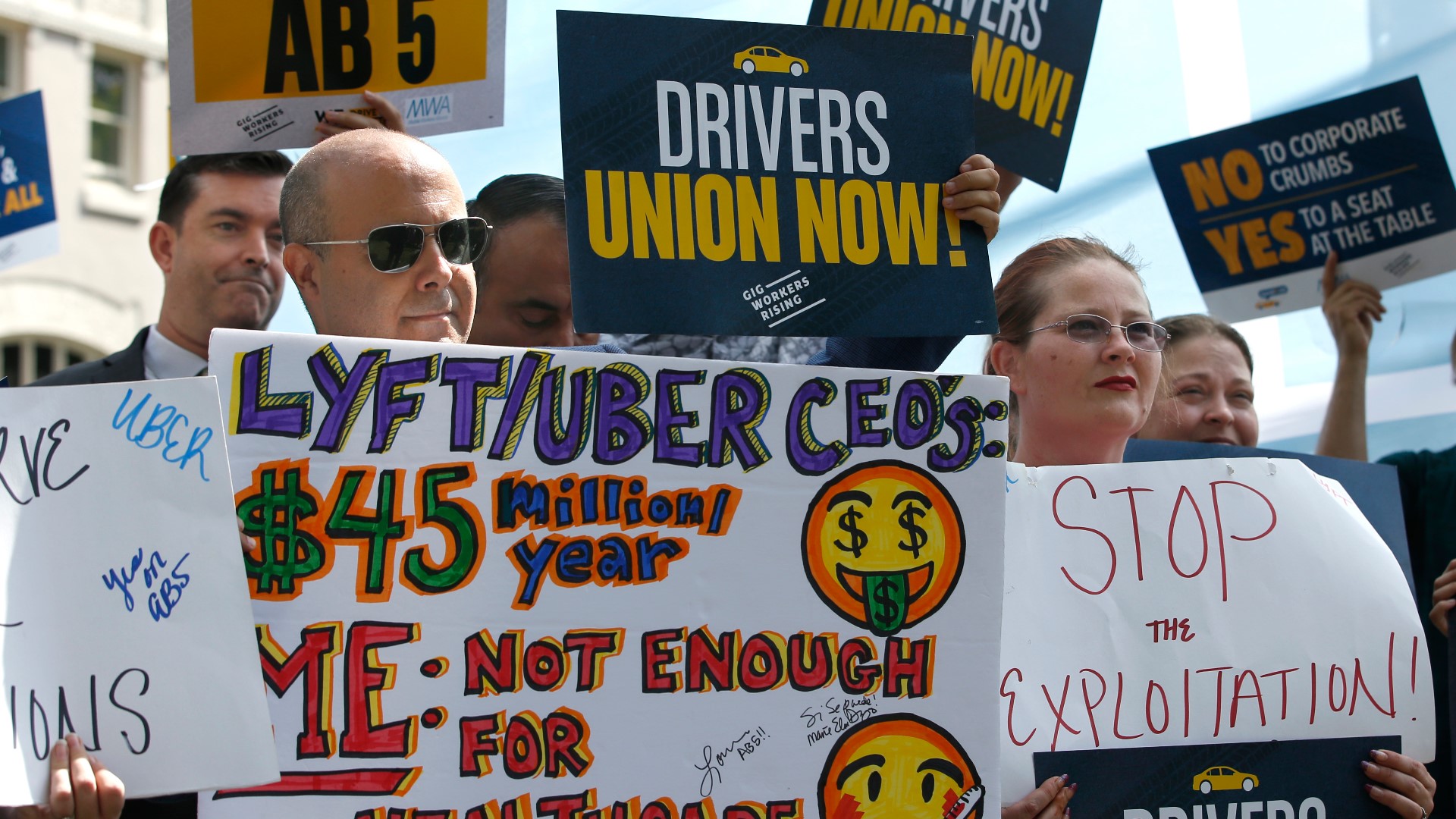 Uber, Lyft and other companies make up a tiny piece of the biggest greenhouse gas polluter in the state: transportation. Yet their contribution to climate-warming emissions is outsized, drawing attention from researchers and lawmakers and raising an ambitious question: how can the state rein in emissions from gig economy companies built on drivers who own their vehicles?

The latest strike against Uber and Lyft comes from the Union of Concerned Scientists, an advocacy group that published a report last week showing ride-hailing trips release 69% more climate-warming emissions than the walking, biking, transit and other car trips they displace. The findings support California’s own analysis, which concluded ride-hailing increases carbon dioxide pollution by 50% for every mile a passenger travels, compared to when they drive themselves.

The state took action in 2018, passing a first-of-its-kind law to curb that carbon pollution. It tasked the California Air Resources Board with setting targets to increase electric vehicle miles within ride-hailing companies and to cut carbon dioxide for every mile a ride-hailing passenger travels. The California Public Utilities Commission must then enforce those rules when they take effect, which is slated for 2023.

California’s cars, trucks, planes and trains produce about 40% of the state’s greenhouse gas emissions. Ride-hailing makes up a small fraction of that, accounting for 1.2% of the miles Californians travel by car. Still, the issue illustrates a much bigger challenge, said Daniel Sperling, director of the Institute of Transportation Studies at UC Davis and a member of California’s air board.

“In some cases we’re picking on them, with laws and rules like this. But on the other hand, it’s kind of a first step towards doing good, sustainable transportation policy,” Sperling told CalMatters. “They’re the guinea pigs.”

Why is California regulating ride-hailing?

Ride-hailing vehicles don’t pollute more than the rest of the cars in the state, but the distance they travel between rides makes them a problem, according to the Union of Concerned Scientists and the air board.

In fact, the ride hailing fleet is more fuel-efficient on average, since it tends to consist of newer cars, more hybrids and more passenger cars rather than light trucks, according to a December report from the Air Resources Board.

While travelers driving themselves tend to go directly to a location, those working for ride-hailing companies drive extra miles between ride requests, or on the way to pick up a passenger. Those extra miles — when the driver is alone in the car — are called “deadhead miles,” and they make up almost 40% of the distance driven by ride-hailing vehicles.

For some drivers, that number is even greater.

“I’m a part-time driver, and I only drive during high demand times, like Friday night, right? And still, I would say that I have about a 50 or 60% occupancy rate,” said Nicole Moore, Lyft driver and organizer with Rideshare Drivers United. “On a Friday night in the middle of Hollywood, I’ll have an empty car for like half an hour. Then I’ll get a ten-minute ride, and that’s it.”

Though ride-hailing makes up a small fraction of all California car miles, its impact is visible. Ride-hailing alone is responsible for about half of San Francisco’s rise in traffic congestion from 2010 to 2016, according to the San Francisco County Transportation Authority. And it’s growing — while rides with taxis, ride-hailing and car sharing make up less than 5% of vehicle miles traveled globally today, that number could be 19% by 2040, a report from Bloomberg New Energy Finance projected.

“We know that that sector is growing,” said Joshua Cunningham, branch chief of advanced clean cars at the Air Resources Board. “Putting in a regulation to start controlling those emissions is really important.”

That’s where the law requiring the air board to set carbon dioxide and electrification standards for ride-hailing fleets comes in. Authored by Democratic state Sen. Nancy Skinner of Berkeley, it also tasks the California Public Utilities Commission with enforcing the rules and requires the ride-hailing companies to figure out how to meet them.

“We’re serious about our environmental impact,” Uber representative Austin Heyworth said at a recent air board meeting, where he expressed Uber’s support for the law and the air board’s efforts. Lyft, in a statement, said it is “striving to make every ride 100% electric over time.”

Others, however, are pushing a more ambitious strategy: electrify within the decade.

Environmental groups including the Union of Concerned Scientists and Sierra Club California urged the board at a January 23 meeting to evaluate what it would take to fully electrify ride-hailing fleets by 2030. The board directed staff to look into it.

Achieving zero-emission fleets, however, could be complicated in the gig economy. Because drivers typically own the vehicles they use, “fleet costs fall directly on the driver — gas, electricity, maintenance, everything and the cost of the vehicle,” said part-time Lyft driver Moore. Ride-hailing companies will have to curb emissions from cars they don’t even own.

It’s not the first time California’s heard this full-electrification idea. An early version of the 2018 bill included a requirement that ride-hailing companies shift to all zero-emission vehicles by 2030. Uber and Lyft lobbied successfully to remove it, citing concerns that low-income drivers would not be able to afford an electric vehicle, according to Streetsblog California.

Skinner said she wants to see the board take bold action in setting standards that will help clean California’s air and combat climate change.

“I want them to set the most ambitious goals possible and feasible,” Skinner said.

Electrification is not the only way to decrease ride-hailing emissions. The Union of Concerned Scientists’ report also advocates for increasing shared rides and incentivizing trips that connect to public transit or bike or scooter shares.

Promoting connections to public transit is something the California Air Resources Board already is talking about. One idea is to reward ride-hailing companies for voluntarily connecting to transit or other low-carbon forms of transportation, like scooters or bikes, by giving them “regulatory credits” that count toward their emissions requirements, Cunningham said.

Gregory Erhardt, assistant professor at the University of Kentucky, said there are “a lot of good reasons to be skeptical” of the notion that ride-hailing benefits public transit, however. Erhardt, who has studied public transportation ridership, said ride-hailing discourages commuters from using public transit and fills the road with more cars.

Ride-hailing may have played a part: Erhardt found that public transit ridership decreased when ride-hailing was introduced to an area, according to a study published in 2019. (A recent uptick in national transit ridership can be attributed to isolated growth in the New York City and Washington, D.C. regions, but even there, the cities didn’t beat their record high numbers.)

While the Union of Concerned Scientists study concedes that “today, ride-hailing competes with and draws riders away from mass transit,” it argues that the companies could promote connections to it. In some areas, Lyft and Uber provide information in apps about public transit options, and in Denver, travelers can pay for public transit rides through the Uber app, according to the Union of Concerned Scientists report.

Erhardt said the new report offered “promising paths forward.” To make these happen, however, the companies likely will need a push. In California, as the Air Resources Board crafts its regulation, the coming year will determine just how far the state will go to address the climate impact of ride-hailing.

“There’s not an incentive, without that regulatory push,” Erhardt said. “That’s the sort of lever that we need to incentivize people to change their behavior, both the companies and the travelers.”

‘You have to pull drivers up’

Don Anair, research and deputy director of the clean vehicles program with the Union of Concerned Scientists and co-author of the recent report, said the responsibility to address ride-hailing emissions “squarely falls on the companies.” Even though they do not own the fleet vehicles, Uber and Lyft could incentivize drivers to buy or lease electric cars, he said. He also suggested the companies encourage pooled rides by adjusting prices so more passengers want to share a trip.

Some ride-hailing companies already are experimenting with initiatives to make zero-emission vehicles more available to drivers. Last year, Lyft launched an electric vehicle rental program for drivers in Denver with a fleet of electric Kias. Rental prices increase with distance driven, starting at $230 a week.

Part-time Lyft driver Moore called these rental programs the “indentured servitude of the rideshare” because of how long it takes to earn enough money to pay off the rental fee. Representatives for Lyft and the Union of Concerned Scientists told CalMatters these rental programs could lower barriers to driving cleaner cars.

That’s why Moore said that focusing solely on the cars won’t be enough. Moore drives a hybrid now, and it’s the first new car she’s ever bought. If she had to buy an electric vehicle, she “would have to quit driving and find another way to pay the bills,” Moore said. “You have to pull drivers up at the same time you pull standards up for their cars.”