Why has the federal government stepped in to help with California’s water woes? 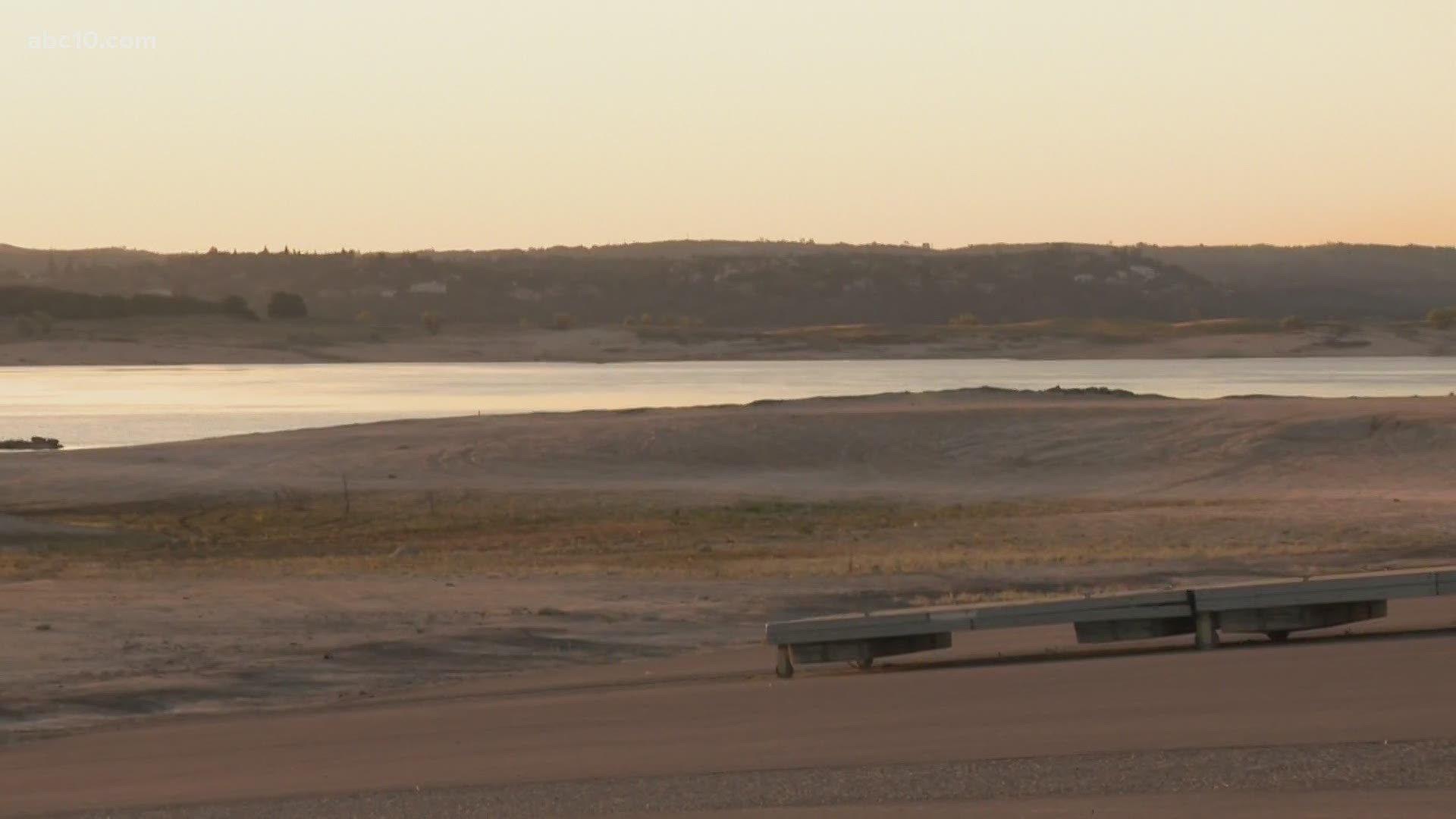 CALIFORNIA, USA — This story was originally published by CalMatters.

Stop if you’ve heard this before: California is in the grip of a severe drought. Again.

Now the federal government is stepping in to help.

To assist California, which is the nation’s largest food supplier, the U.S. Department of Agriculture recently declared a drought disaster for 50 counties. That makes growers throughout the state who have been struggling with parched conditions eligible to seek federal loans.

“This declaration emphasizes the devastating and far-reaching impact of climate change on the agricultural producers that feed and power America,” Under Secretary of Agriculture Gloria Montaño Greene said in an emailed statement.

Here’s what you need to know about the disaster declaration and its effect on California:

A drought disaster sounds alarming, but officials say the reality is more mundane: It simply opens up emergency federal loans to California farmers who are struggling with back-to-back dry years. Growers in the 50 counties but also in all the counties next door (including 16 in Oregon, Arizona and Nevada) are eligible for loans.

“The bar is set very low to qualify, because the purpose of the disaster designation is to quickly make financial assistance available to (agricultural) producers,” said Jeanine Jones, interstate resources manager with the California Department of Water Resources.

This federal designation is very different from declaring a drought emergency under California’s Emergency Services Act, which would allow the governor to take more sweeping actions affecting all Californians, such as mandating conservation, waiving some state regulations and reallocating funds. Under state law, declaring a drought emergency would require “conditions of disaster or of extreme peril to the safety of persons and property within the state” that local governments can’t cope with on their own.

Comparing Vilsack’s designation of drought disaster areas to a state drought emergency is “like (comparing) apples to pineapples, because it’s a really large difference,” Jones said.

The decision was ‘as close to automatic as it can get’

So what is the federal decision based on? The USDA looks at how dehydrated California has been.

Rain and snow in much of the state are roughly half of average. The state deemed the snowpack on California’s mountains “well below normal.” The two major reservoirs are at about half of their capacity. And streamflow rivals levels during the peak of the last drought, which started in 2012 and continued through 2016.

“Much of the state has had two pretty darn dry years,” Jones said, adding that the most recent wet season — last October through March — ranks as the fourth driest on record in California.

A nationwide wetness watchdog, called the US Drought Monitor, has colored California in shades of yellow, orange, red and brown, which denote conditions ranging from abnormally dry to exceptional drought.

The USDA’s designations hinge on that map. Counties can be considered drought disaster areas if any part enters the driest red and brown “extreme” and “exceptional” categories during the growing season, or if they move into the orange “severe drought” category and stay there for eight consecutive weeks.

These categories are based on various measurements, not just precipitation and snowpack. They include vegetation health, soil moisture, surface water and other criteria. The map authors also work with local experts to gauge on-the-ground conditions.

“The disaster declaration process is almost as close to automatic as it can get” because it’s based on the drought map, said Jacque Johnson, acting state executive director of the USDA Farm Service Agency’s state office. “What happened in California on March 5 was 50 of our 58 counties were disasters.”

Farms in all counties are eligible for loans

Vilsack’s letter designated 50 California counties as primary disaster areas. The other eight are listed as “contiguous” counties. What gives?

Contiguous counties are exactly what they sound like: the counties that didn’t quite hit the drought threshold at the time but are adjacent to primary disaster areas. The eight counties are Orange, San Diego, Ventura, Santa Barbara, San Luis Obispo, Monterey, Santa Cruz and San Benito. None of them, at the time of the declaration in March, had entered the more severe dry conditions of the other 50.

Growers throughout the state are eligible to apply for emergency federal loans until early November. Some also may qualify for other federal assistance programs.

“The assumption is that collateral damage falls into the next door neighbor county,” Johnson said. “The county line is not a barrier.”

Newsom has so far resisted calls to declare a drought emergency. He said on Tuesday that his staff had been “talking for months internally” and drought plans were in place, but he was opaque when it came to providing specifics.

Officials have said that they believe the state has enough administrative tools to respond to the drought without declaring an emergency.

The governor, under the threat of a recall, may be in triage mode, taking his pick of emergencies to respond to: drought, predictions of another monster wildfire season and the ever-present global pandemic.

Lawmakers have been quick to pounce on what they see as Newsom’s inattention or indifference to a pressing problem that hits rural communities hard. A bipartisan group of legislators, led by Senate Agriculture Committee Chair Andreas Borgeas, a Republican from Fresno, and Assembly Agriculture Committee Chair Robert Rivas, a Democrat from Hollister, requested a statewide drought emergency declaration.

The legislators noted that allocations from the State Water Project, which draws water from the San Francisco Bay-Delta and sends it to cities and farms, have been reduced to 5% of normal. They urged the governor to forestall a catastrophic loss in farm revenue.

In a reference sure to get under Newsom’s skin, the letter referred to actions taken by former Gov. Jerry Brown in 2014 when similar drought conditions prevailed. That emergency declaration, the letter said, provided “flexibility and commonsense streamlining to utilize our limited water in the most efficient way.”

The loans can make or break farms and ranches

The State Water Resources Control Board in March put California’s 69,000 farms on notice that they should start planning now for severe impacts this summer.

This comes after climate change and inadequate water supply are already battering California’s growers, who produce more than 400 commodities, worth nearly $50 billion a year, including about half of the nation’s fruits and vegetables and nearly a fifth of its milk.

Legislators estimate that about 1 million acres of San Joaquin Valley farmland will be fallowed over the next two to three decades because of reduced groundwater and surface water supplies. They project the loss of 85,000 jobs as a direct result of reduced water access.

Against that backdrop of dire news, the federal disaster declaration opens up aid for the state’s beleaguered growers and ranchers. The loans assist them for loss of crops, trees, land and livestock.

Each farm operation could receive a loan of up to $500,000, based on its loss. The USDA’s emergency loans were budgeted at $1.21 billion nationwide for this year.

The federal agency “considers each emergency loan application on its own merits, taking into account the extent of production losses on the farm and the security and repayment ability of the operator,” Vilsack told Newsom in his letter.

Credit: Photo by Anne Wernikoff, CalMatters
Cattle graze outside of Bieber, a small town in Lassen County, in July 2019. In response to the drought, farmers and ranchers in all 58 California counties are eligible for loans to assist with loss of crops, trees, land and livestock.

For farmers, the loans can make or break their operations, which are already on tight water allocation budgets.

“From the Oregon border to the Mexican border, California farmers will see sharp cuts in water supplies this year,” said Jamie Johansson, president of the California Farm Bureau. “That means hundreds of thousands of acres of land will lie idle. It means thousands of people will lose jobs, in both rural and urban areas. It means Californians will have less locally grown food available.”

The expenses can pile up. Because of the drought, ranchers may have to lease additional pasture, buy extra feed and pay to haul and store water to replace the natural water sources that have dried up, Johnson said.

The USDA has already received inquiries from California cattle ranchers interested in applying for the loans.

The state has about 13,000 cattle operations, with more than 5 million cattle and calves. The San Joaquin Valley, particularly Tulare, Merced and Kings counties, has the most.

Katie Roberti, a spokeswoman for the California Cattlemen’s Association, said ranchers are facing the most severe conditions in decades, worse than the last drought.

“While the federal designation is welcomed assistance, without precipitation many California cattle producers are going to be forced to make the difficult decision to reduce the size of their herds, some more drastically than others,” she said. “Feed on rangelands will be limited and we are hearing hay prices will be high. These herd reductions will have a lasting impact on the number of cattle in the West for years to come.”

WATCH: Mega drought and the impact on California and western states