5 things to know about Newsom’s budget deal with Legislature

The $262.6 billion spending plan for the fiscal year that begins July 1 was fueled by a $76 billion state surplus and $27 billion in federal aid. 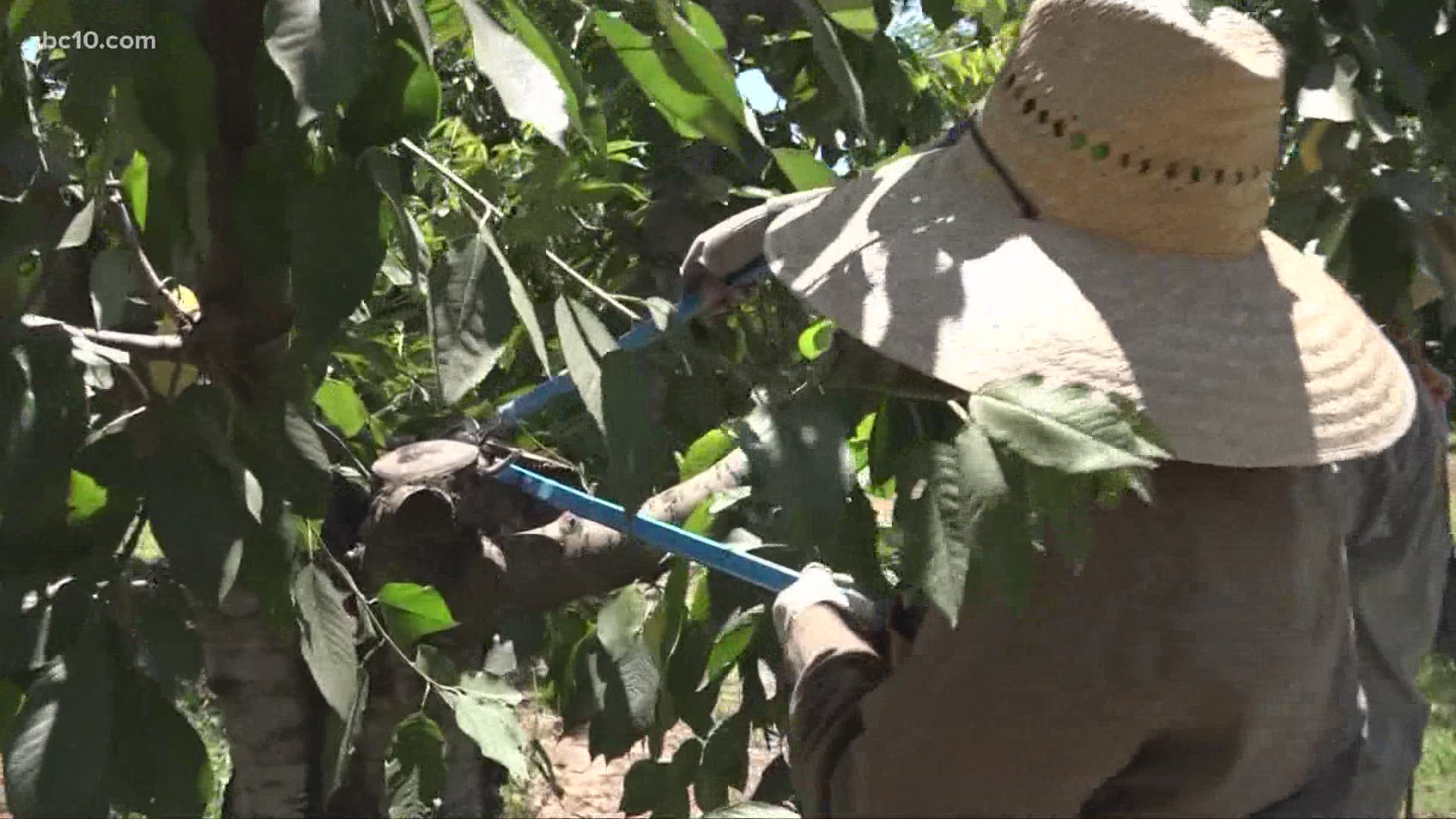 SACRAMENTO, Calif. — This story was originally published by CalMatters.

California lawmakers are set to vote today on a record-busting state budget that reflects new agreements with Gov. Gavin Newsom to expand health care for undocumented immigrants, spend billions to alleviate homelessness and help Californians still struggling through the pandemic.

The $262.6 billion spending plan for the fiscal year that begins July 1 was fueled by a $76 billion state surplus and $27 billion in federal aid. Democrats who control the Capitol wanted to use the windfall to help the state recover from the coronavirus pandemic and its uneven toll on Califorinians.

“We’re investing that in the unprecedented challenges the state faces, including into addressing the needs of people that are working hard, playing by the rules, and barely making ends meet,” Newsom said Friday.

The pandemic and its economic impacts have not only colored state budget negotiations — they also disrupted California’s political landscape this year, giving rise to a GOP-backed effort to throw Newsom out of office. With the recall now qualified to hit the ballot, electoral politics also loomed over budget negotiations this year.

The budget is still not totally done

Even with the record-busting enormity of this year’s budget and Democrats holding all the power in Sacramento, Newsom and legislative leaders were not able to reach agreement on everything. They did not issue public statements announcing a broad budget deal, even as bills went into print Friday reflecting some new agreements that modify the placeholder budget lawmakers approved on June 14.

The lack of the usual bravado indicates that while this budget meets the legal requirements to craft a spending plan by July 1, significant negotiations will continue. Some key expenditures will likely be approved later this summer through a special kind of legislation known as “budget trailer bills.”

For instance, they did not decide exactly how to spend billions of dollars to address the threats posed by wildfires and drought. The budget includes $1 billion over several years for wildfire prevention, $3 billion to alleviate drought and $3.7 billion over three years to mitigate dangers posed by climate change — but Newsom and legislative leaders are still figuring out how to spend the funds.

The budget doesn’t contain any spending on California’s controversial high-speed rail project that aims to connect San Francisco and Los Angeles. Newsom in May proposed spending $4.2 billion in bond funds to complete construction in the Central Valley — which critics deride as a “train to nowhere” — and move toward launching service between Merced and Bakersfield. But legislators pushed back and left the money out of the budget.

“We just seem to be at loggerheads with elements within the administration about” how much of the plan to fund, Assembly Speaker Anthony Rendon told CalMatters.

When he ran for office in 2018, “Governor Dad” Newsom campaigned heavily on his support for families and early childhood education. But child care, including pay rates for some providers, was a final sticking point in the budget negotiations, Rendon told reporters. And many details are still to be worked out.

One key piece was settled Friday: In a first-ever agreement with the new providers’ union, the state approved the first increase in pay rates in five years, plus funding to train and license more providers, according to a statement from the union, which said raises of at least 15% would start in 2022.

Child Care Providers United — recognized as a union in a 2019 bill signed by Newsom — held a rally Thursday at the Capitol, attended by Rendon and Senate leader Toni Atkins, to press the governor to sign on to the legislative proposal that called for an additional $1 billion for the pay increases.

Newsom’s team had pushed back, officials close to budget talks told Politico, voicing concerns about the impact increased rates will have when the state does not have a surplus of cash.

The pay rate increase comes at a time when California’s child care sector has been hit hard: During the pandemic, about 8,500 licensed child care sites shut down. That took tens of thousands of slots for kids who need care while their parents work or attend school — and also took employment from thousands of women of color, who make up a majority of the child care workforce.

The budget includes a big expansion of health care

California took another step toward trying to achieve universal health care with this budget, as Newsom and lawmakers agreed to offer Medi-Cal health insurance to undocumented residents age 50 and older.

It’s the latest expansion in Democrats’ years-long effort to allow unauthorized immigrants to participate in the state-funded health care program for low-income residents. Previous budgets opened the program to undocumented children, and then young adults as old as 26.

This year, Newsom proposed making undocumented residents age 60 and older eligible for Medi-Cal, while the Legislature wanted to offer it to those age 50 and up. A key sticking point: Covering health care for more people commits the state to ongoing spending that it might not be able to afford in a future recession.

Advocates said this budget makes California the first state in the nation to provide government health insurance to undocumented immigrants at age 50. It also eliminates an earlier rule that made people ineligible for Medi-Cal if they had a small amount of savings in the bank.

Newsom initially did not propose significant funding to rebuild the state’s public health infrastructure, but the Legislature wanted to give local public health departments an additional $200 million annually to add staff and modernize equipment. In the end, the budget gives them $300 million a year, but delays payments until 2022.

Legislative leaders and Newsom ended up on the same page about how much to spend on homelessness and affordable housing — a total of $12 billion over the next two years. But they made a few concessions on how exactly to spend all those billions.

In their proposed budget, the Legislature had made ongoing funding a top priority. They pitched four years in steady funding, to the tune of $1 billion a year for cities and counties to combat homelessness. The key was flexibility, as local jurisdictions would be able to decide what exactly would be most effective. The governor had proposed no money for that purpose.

The compromise split right down the middle: two, instead of four, years of $1 billion annually for local jurisdictions. It’s still the biggest, repeat pot of funding for homelessness in California to date. Funding will be re-evaluated in the third year, and rules must still be hammered out on who will get that money and how they’ll have to spend it to ensure accountability and results.

Earlier Friday, Newsom and legislative leaders announced a deal to extend the statewide eviction moratorium through Sept. 30 and to try to speed up rent relief using $5.2 billion from the federal government.

Democrats used the budget to fight the Newsom recall

With California recovering from the pandemic and Newsom’s job approval rising in public polls, Democrats are pushing to get the recall on the ballot sooner rather than later. They included $250 million in the budget to cover the cost of putting on the special election to help expedite the process. They also wrote a budget-related bill that sets the stage for an earlier election date by allowing the Legislature to skip a 30-day fiscal review period if they’ve already put money aside to cover election costs. The date is still not set, but a September election is looking increasingly likely.

And as Newsom fights to hang onto his job, he’s used the budget process to show voters his priorities. In May, he barnstormed the state, announcing multi-billion dollar budget nuggets in every major media market as he touted that California is “roaring back” from the pandemic. In June, he launched the first TV ads of his anti-recall campaign — featuring the same “roaring back” branding and a focus on the same budget items: funding to house 65,000 homeless people, $600 stimulus payments for most Californians and $4 billion in grants for small businesses.

“Newsom is delivering money to your pocket,” the ad says. “And free Pre-K for every California child, regardless of income.”

Republicans — who have spent months blasting Newsom’s pandemic response — criticized the governor for “throwing taxpayer money at the host of problems he created in the first place.”

Gun sales have surged in California. Here's why people say they are buying more guns