"It does not solve anything to arrest people for having or using drugs and incarcerating them," the bill's author, Sen. Scott Wiener, said. 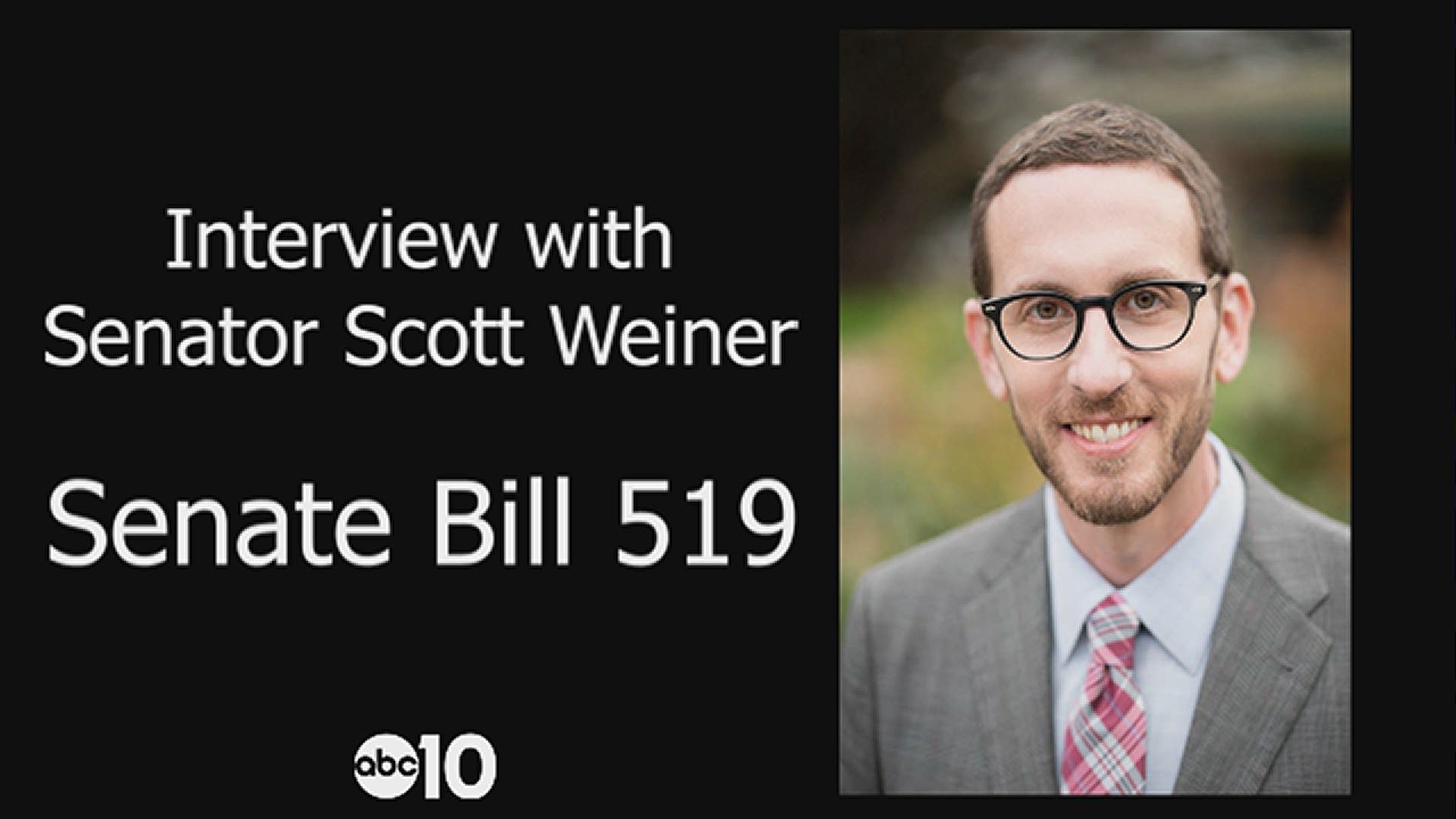 SACRAMENTO, Calif. — A California lawmaker has introduced a bill to the Legislature that would decriminalize the possession of psychedelic substances.

And after successfully navigating through three committees, Sen. Scott Wiener, (D-San Francisco), is optimistic about the bill’s chances.

Senate Bill 519 is a rebuke of America’s decades-long “war on drugs,” according to Wiener. And while it doesn’t go as far as Oregon – which in November voted to decriminalize all drugs – it does seek to decriminalize many psychedelic and hallucinogenic substances that may have applications to treat a range of mental health ailments.

ABC10 spoke with Sen. Wiener via Zoon on Monday to learn more about his bill, why he feels it is needed, and what it could lead to down the line. Here is what he had to say:

Sen. Wiener: [Psychedelic drugs] are showing huge potential in terms of treating mental health and addiction problems. These drugs are illegal right now in California because of the war on drugs.

We know the war on drugs has been a complete failure. It does not solve anything to arrest people for having or using drugs and incarcerating them. Drugs are a health issue, not a criminal issue. And it’s time to take a health-based approach to drugs instead of just mass incarcerating people, which just wastes money and does not stop people from using drugs.

Psychedelics, in particular, have huge promise and we’re working with a big network of veterans and other people suffering from PTSD, depression, addiction, and these substances are helping them turn their lives around.

ABC10: Why do you feel it is important to pass a bill like this now?

Sen. Wiener: We have a huge problem in California, and everywhere, of untreated mental health and addiction problems. People who are suffering in so many ways. And we see it most obviously on our streets, but it’s everywhere. People who are working, people who have housing, veterans who have fought for our country, young people who have these mental health problems, who might be addicted to drugs, they’re not getting the treatment that they need.

Sometimes the treatment that they’re getting is not working. And there is increasing evidence that psychedelics can be hugely beneficial to people in treating various mental health conditions as well as addiction. Particularly when it’s combined with traditional talk therapy.

And so, we want to stop criminalizing people for possessing or using these substances. At the same time, the FDA has been considering the growing evidence that psychedelics work. So hopefully at some point, doctors will even be able to prescribe them.

Right now, we think California needs to stop arresting and locking people up for possessing psychedelics.

ABC10: Which psychedelic substances would this bill decriminalize?

Sen. Wiener: Mushrooms or psilocybin, which has shown huge promise. MDMA, mescaline, LSD, ketamine, DMT, ibogaine, those are the main ones. And they all show varying degrees of promise in terms of treating mental health and addiction diagnoses.

ABC10: Is this bill strictly for the medicinal applications of these drugs or would it cover recreational use, too?

Sen. Wiener: The Food and Drug Administration (FDA) is focused on purely medicinal [application] in terms of obtaining these substances through the health care system. What we’re doing here is saying that we are no longer going to arrest people for possessing the drugs. And we’re not saying, "Oh, you’re using it because you’re depressed. You’re not, so we’re going to arrest you and not you."

We’re just going to stop arresting people for possessing these drugs. Because let’s be clear, this is also about the war on drugs. We’ve been trying to arrest our way and incarcerate our way out of drug use for more than 50 years. It’s been a complete failure. It doesn’t work.

People are using drugs more, getting addicted more now than they were 50 years ago. But we have spent hundreds of billions, or trillions, of dollars incarcerating people for drug use. It doesn’t work. And so let’s stop arresting people for possessing and using, in this case psychedelics, and then we can talk about other drugs, let’s stop that and take a more health-based approach.

ABC10: Does your bill allow for the cultivation or manufacture of psychedelic substances?

Sen. Wiener: People will be able to cultivate for personal use. Some of the psychedelics are synthetic. That’s not what we’re talking about. But some, like mushrooms, are plant-based. And so it will allow for, just like we did for cannabis, a small amount of cultivation for personal use.

ABC10: Would passage of the bill do anything to vacate convictions of those who have been arrested/jailed for possession or use of these substances?

Sen. Wiener: We want to make sure people who have been convicted of these crimes in the past get their history expunged, so that it’s not hanging over their heads. We initially had that as part of this bill, but we had to split it off. And if this bill passes, we’ll do that as a follow-up bill.

We did this for cannabis as well after we legalized it, we gave an easy pathway for people to expunge their past convictions. So, we’re definitely committed to doing that here as well.

ABC10: Where does SB 519 stand in the legislature right now?

Sen. Wiener: The bill has passed through three senate committees now, which is great. It is on the Senate floor and we’ll take it up for a vote on the Senate floor either this week or next week. And we are cautiously optimistic that we have a path to pass it off of the senate floor. I think I have colleagues who understand the importance of this issue.

The two organizations that are sponsoring this legislation are groups that work with combat veterans to help them access psychedelics so that they can address their untreated mental health and addiction problems. Right now, these groups have to send these combat veterans to other countries – to Mexico or Peru or elsewhere to get this treatment. Which is outrageous. These are people who have gone to war, who have fought for our country, and sacrificed their own bodies for our country and we’re forcing them to go to another country to get treatment.

So, we’re working with a huge coalition of combat veterans to try to move the bill forward. And people when they listen to the veterans, they really learn and they get it.

ABC10: Has a bill like this ever been introduced before?

Sen. Wiener: This is the first time we have introduced this bill in the Legislature. This is a new idea for the Legislature. And so, it requires a lot of work to educate and provide information.

Oregon voters decriminalized all drugs last November. [In Oregon] it’s like a $100 ticket [for possession] which you can clear if you call a counseling hotline. So, Oregon went even further than what we’re proposing, in decriminalizing all drug possession.

ABC10: Could this bill’s passage possibly pave the way for the legal sale of psychedelics, kind of like marijuana a few years ago?

Sen. Wiener: The other piece of this bill, in addition to decriminalizing [psychedelics], it sets up a working group to take some time and come back to the legislature and governor with recommendations about next steps. That could be legalization. It could be creating a new kind of certification for counselors who can help guide people through psychedelic experiences. It could be a lot of different things.

Right now, we’re just saying stop arresting people and prosecuting people for possessing these drugs. Legalizing is a much more complicated and challenging thing, to set up an entire regulatory structure and potential retail sales. I don’t know if we’re going to go in that direction. But we’re setting up this working group of experts to make recommendations to the legislature of what we might want to consider in the future.