EDD website is down, causing confusion for California unemployment benefits

People have had issues accessing and certifying on the EDD website since Saturday. EDD says it is working on the issue but wouldn't provide more details. 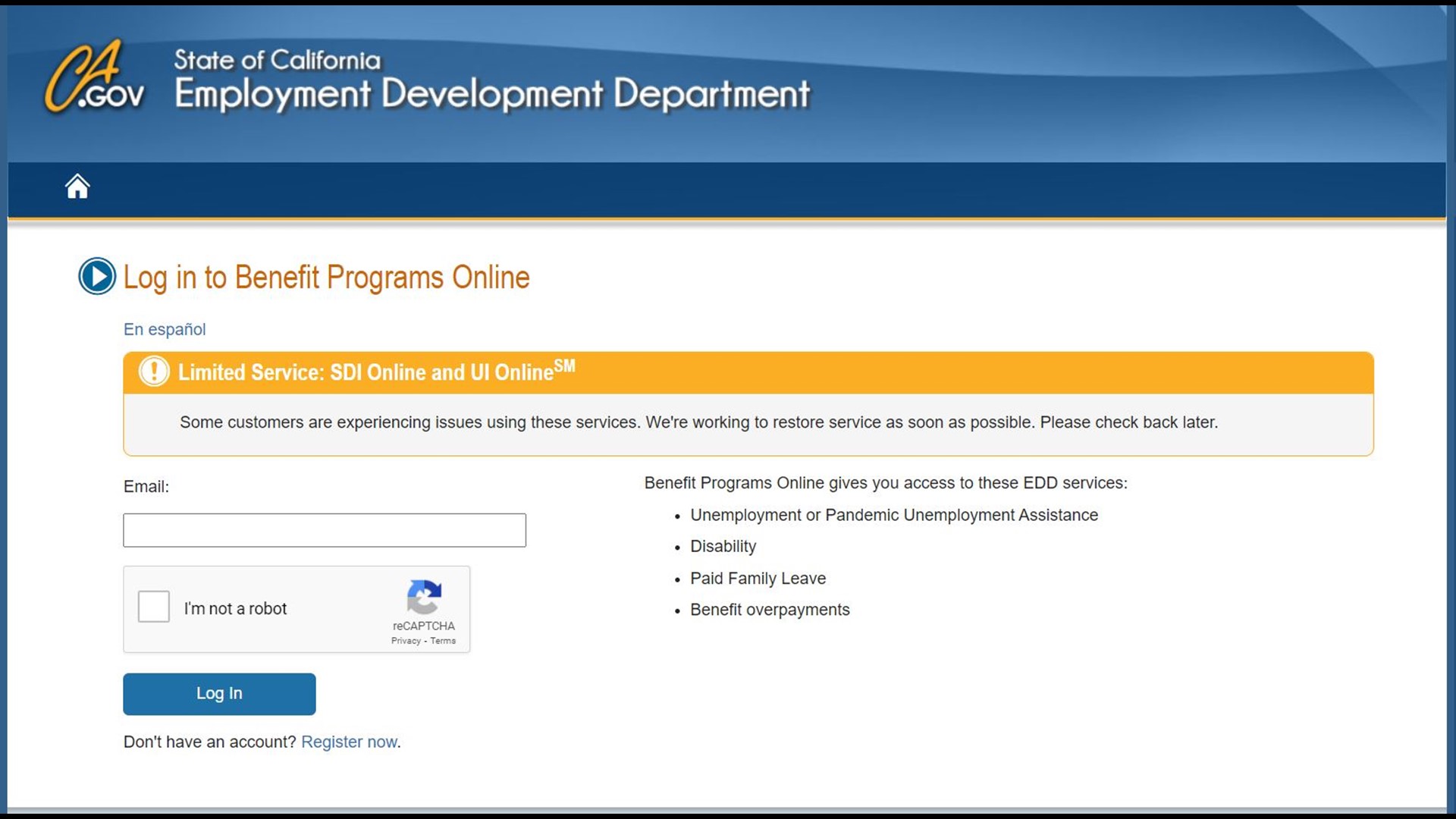 SACRAMENTO, Calif. — People trying to certify weeks of unemployment are finding they can't because the website for California's Employment Development Department (EDD) is not working.

In a statement to the Dollars and Sense team, a representative for the EDD said, "Beginning on Sunday, some claimants looking to certify for their next two-week period of benefits encountered intermittent issues with the system.  We still had more than a half-million people come through to certify and certifications continue coming through today. The UI Online and SDI Online pages are otherwise working fine. We apologize for the inconvenience."

Viewers we have talked with say they have had trouble accessing the system since Saturday, March 20.

Peter Opel walked us through the issue he's experiencing. He can access and go through the steps of completing the EDD 'Week I' web page, but when he tries to continue on to 'Week 2,' the web page said, "This page isn't working right now."

After trying multiple times Sunday, he gave up in hopes of the website working Monday. With the arrival of Monday, it still didn't work despite Opel's attempts as saving his changes as a draft, as well as testing out multiple internet browsers.

The EDD would not provide any details about how long the system has been down or when it expects to fix the problem.

The EDD has now added a warning on its website for users trying to log into the UI Online system. That warning states, "Limited Service: SDI Online and UI Online: Some customers are experiencing issues using these services. We're working to restore service as soon as possible. Please check back later."

EDD said if people encounter an issue while certifying for benefits, they recommend they check back a little later. EDD added its " Information Technology team continues to work on resolving the issue to mitigate impacts. When the issue is resolved, we’ll update the text on the SDI and UI Online pages."

The EDD's website is especially in-demand as in addition to those trying to re-certify every two-weeks, there are many who need to re-apply for annual benefits as a year ago, the pandemic started, causing an increase in job layoffs and furloughs.

"I was laid off just about a year ago. I was driving with a limo company," said Mark DeFazio.

Rather than go online, DeFazio renewed his benefits over the phone. But just trying to get ahold of the EDD appears to be a job in itself.

"It took 2.5 hours to just get through... just constant calling," said DeFazio. He said he was then transferred to another representative for around 40 minutes.

California Assemblyman Jim Patterson (R-Fresno) said he wants more answers from EDD about why its systems are not working and is going to formally ask EDD to report on its outage problems from the past three months.

"The only thing I've received formally and officially from the EDD in hearings where I've pressed them hard has been, 'We're fixing it. It's getting better,'" said Patterson.

But it's clearly not.

EDD had another outage on March 9. In that case, EDD said the outage lasted for about an hour.

That's why Patterson is demanding the EDD for a full report of outages that have occurred over the last three months.

"I have absolutely lost my patience with the excuse-making," said Patterson. "We're going to find out precisely how often, how long and what's wrong."

The outage comes as EDD is working to implement the unemployment benefit extensions provided in the American Rescue Plan. EDD has said it won't be able to pay PUA and PEUC recipients the new benefits until April, leaving potentially millions of people without their money for weeks.