Newsom moves to slash school, health spending — but asks feds for a rescue

Newsom is taking a strategic, if risky, approach by tying many state budget cuts to aid from the federal government. Will it work? 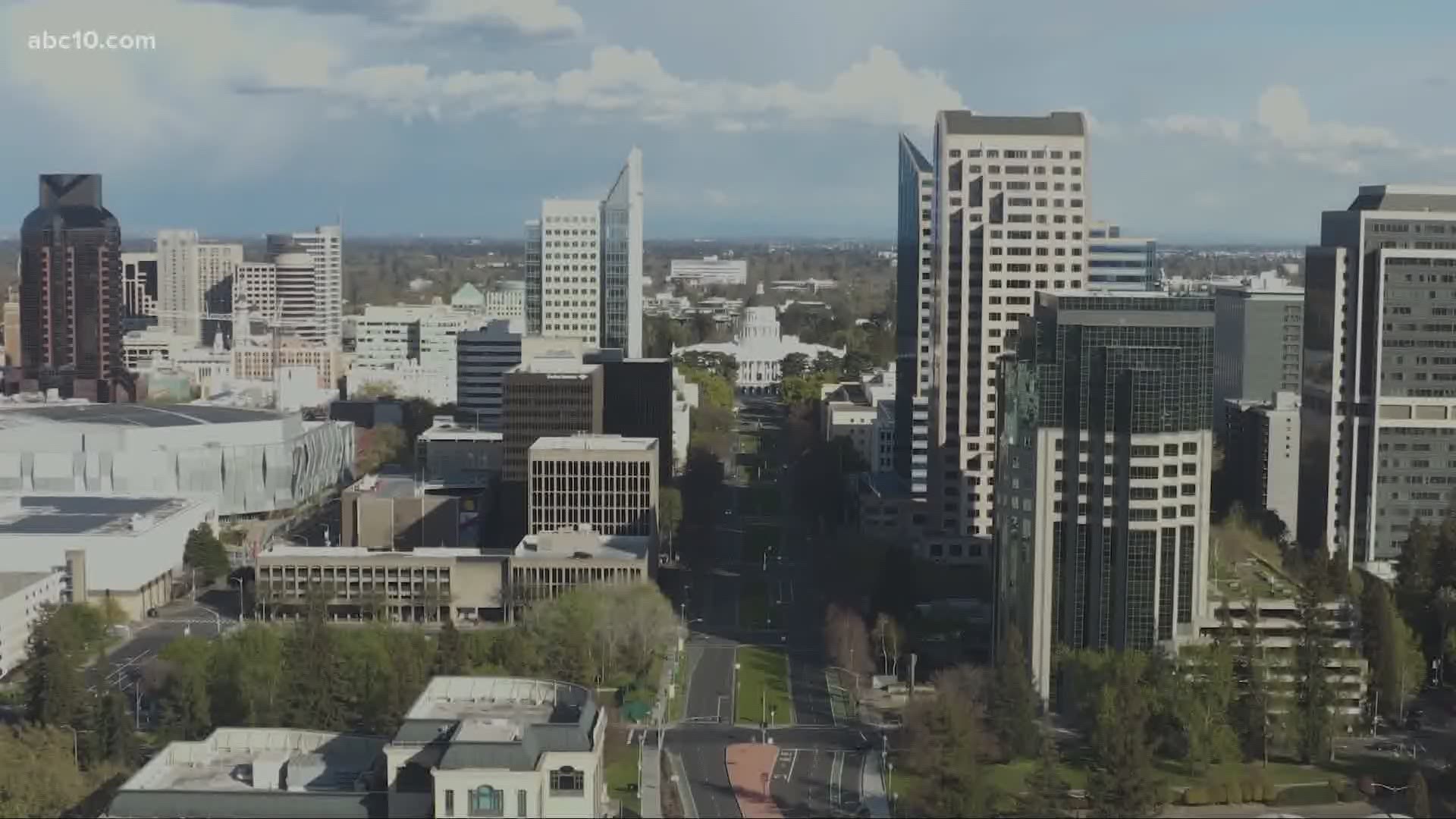 SACRAMENTO, Calif — How does a liberal, blue-state governor take on the unappealing task of slashing the budget? By shifting a lot of the pressure to the federal government.

In revising California’s budget down to $203 billion Thursday, Gov. Gavin Newsom charted a plan to fill a huge deficit by tying many cuts to additional federal aid. If the feds come through with $1 trillion for state and local governments that Newsom and other Democratic governors have requested, California would not reduce funding to schools, colleges, parks, child care, health care and other programs.

“The President of the United States, with a stroke of the pen, could provide support for Nancy Pelosi’s new HEROES Act and these cuts could be eliminated,” Newsom said, as he presented his proposal to close a $54 billion deficit brought on by record job losses during the coronavirus pandemic.

It’s a strategic, if risky, course as Newsom heads into a sprint of budget negotiations with state lawmakers over the next four weeks.

On the one hand: Newsom’s proposed cuts will likely unleash an outpouring of advocacy from sympathetic constituencies including teachers, firefighters and police that could influence decisions in the nation’s capital. Newsom enjoys longstanding ties to House Speaker Nancy Pelosi, a fellow San Francisco Democrat whose father-in-law was business partners with Newsom’s grandfather. And despite feuds with Donald Trump that defined much of Newsom’s first year in office, he has developed a working relationship with the president. They have been publicly praising each other since the pandemic began.

On the other: GOP Senate leader Mitch McConnell has already rejected Pelosi’s latest aid package and previously said he wouldn’t support any “blue state bailouts.” Federal aid at the level Newsom would like — not to mention passage before cuts to the state budget would take effect on July 1 — is hardly a sure thing.

“We do need to have a Plan B,” said Assemblyman Phil Ting, a San Francisco Democrat who chairs the Assembly budget committee.

“I don’t think we should only rely on the federal government… If the federal money doesn’t come through, we should think about other options before we go to cuts.”

Ting’s counterpart in the state Senate sounded more optimistic that Congress would come through and that Newsom’s proposed cuts would not come to pass.

“The programs that he’s attached to the trigger hopefully will create a wonderful advocacy opportunity for beneficiaries of those programs to reach out to our congressional representatives to make sure that the state gets the resources they need so we don’t have to cut those areas,” said state Sen. Holly Mitchell, a Los Angeles Democrat.

Indeed, within hours of Newsom’s announcement, the California Teachers Association began asking Californians to call their members of Congress and urge passage of Pelosi’s aid package.

Lawmakers will now sift through Newsom’s proposal before they must pass a budget on June 15. GOP Sen. Jim Nielsen of Tehama quickly rejected Newsom’s approach, saying “relying on federal bailouts is not a budget solution.”

But Republicans make up just a quarter of the Legislature, not a large enough bloc to be influential in budget negotiations.

Most Democrats in the Legislature Thursday were elected since the last recession and now face their first bleak budget. Up until the coronavirus outbreak, California had enjoyed the longest economic recovery since the Great Recession. After raising taxes in 2012, the state managed its finances prudently in good years, paying off a $35 billion “wall of debt” from internal borrowing schemes and building up significant reserves — all of which helped improve the state’s credit rating.

Still, public employee pensions have since reported record losses. That has local officials fearful of service cuts, layoffs and even bankruptcy because state and local governments are obligated to contribute more — even when they have less. CalPERS, for example, shed $69 billion as the global financial market recoiled from the pandemic.

And former Gov. Jerry Brown, a doomsayer who paddled right of many legislative Democrats in seeking fiscal restraint throughout his second tenure, warned in his final state budget that the good times wouldn’t last forever.

“What’s out there is darkness, uncertainty, decline and recession,” Brown said in 2018. “So good luck, baby!”

The Newsom administration projects 24.5% unemployment, a 21% decline in new housing permits and a nearly 9% drop in California personal income for the fiscal year starting July 1. It’s a stark turnaround from January, when the governor laid out an ambitious agenda featuring a $5.6 billion surplus.

Newsom acknowledged all of that has disappeared “in a blink of an eye” as he walked back many of his January proposals. The governor dropped a plan to extend Medi-Cal health coverage to low-income undocumented seniors over 65 — a move that could cause friction with legislative Democrats hoping to support a community more vulnerable to the virus.

“Immigrants are the backbone of our state and have been serving as essential workers throughout this crisis,” Assemblywoman Lorena Gonzalez, a San Diego Democrat, said in a statement. “We are disappointed, but not surprised by the Governor’s actions to go backward on health for all.”

The crisis, however, may present opportunities for Newsom. He had proposed closing one prison in the next five years. Now he wants to close two prisons, one in 2021 and another in 2022. That will likely put him in conflict with the prison guards union that has traditionally wielded clout at the Capitol, but if Newsom is successful he would burnish his progressive bona fides in any future political campaign.

Broadly, the governor called for bridging the deficit by canceling non-essential spending, tapping reserves and borrowing. Among his proposals:

California could look to its taxpayers in other ways as well, though it’s unclear whether voters will be in a mood to help. Labor and education groups are pushing a November ballot measure to overhaul Proposition 13, California’s landmark property tax cap, to help prevent steeper cuts to local governments and public schools. The Schools and Communities First campaign estimates the initiative could bring in $12 billion a year by raising commercial property taxes.

Newsom has not endorsed the proposal, which business interests vehemently oppose, but said he hasn’t ruled out asking voters for some kind of tax increase.

“We are considering other approaches, including other revenue strategies,” he said. “We will pursue conversations with the Legislature, with leaders all up and down the state and we hope we can help guide some consensus about what is most appropriate to put forward to the voters.”

In the meantime, about 26% of Newsom’s budget solutions rely on cuts he said would be eliminated if enough federal aid comes through.

“We are doing our best to help support people in need, but we now need the federal government to support not only the state of California, but other states across this country,” Newsom said. “If they do, if they meet this moment, we will be able to significantly reduce the stress and anxiety many are feeling.”

In other words: Washington, the ball’s in your court.