The pain and grief were still raw as thousands of all races and creeds gathered to honor nine victims, all employees of the Valley Transportation Authority (VTA). 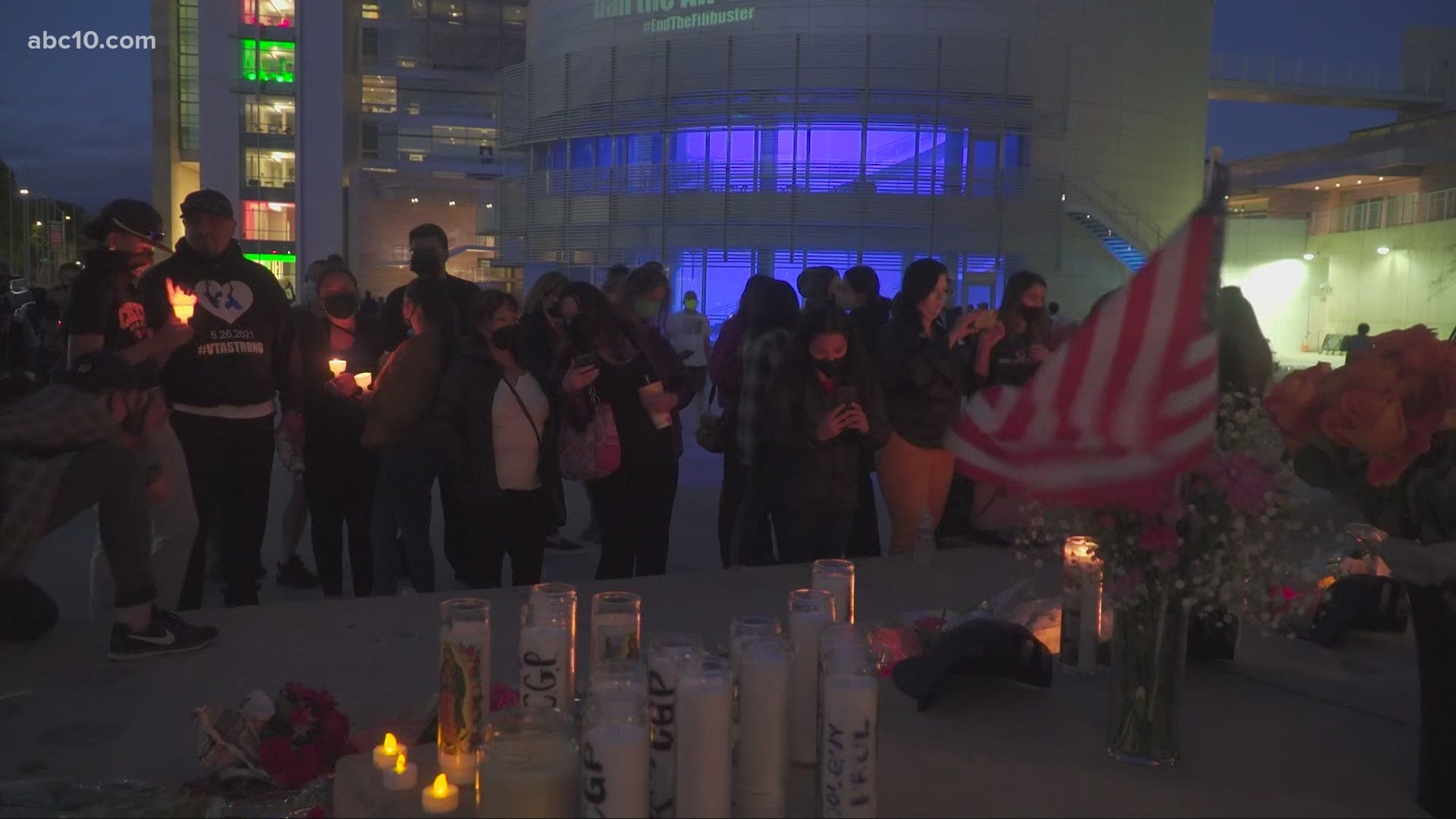 An amazing outpouring of love and support filled a San Jose plaza Thursday to honor the nine men gunned down by their coworker who later took his own life.

The pain and grief were still raw as thousands of all races and creeds gathered to honor nine victims, all employees of the Valley Transportation Authority (VTA).

Beyond their essential work, the victims were fathers, brothers, sons and dear friends.

Paul Delacruz Megia was killed in the shooting. He was just 42 years old.

"Only close friends and family understood his humor," said Megia's sister. "His life was cut shot. My dad lost a best friend."

Taptejdeep Singh also lost his life in the shooting, his family said the 36-year-old father of two died a hero.

"When he saw the shots, his first reaction was to tell other people to run for safety to make sure his colleagues were safe," said Singh's brother Karman. "That's how he lived his whole life by helping others."

Leaders of the VTA are calling for change in gun control and mental health services to break the cycle of mass shootings in the United States.

"Let's do this together."

You can watch the full vigil below.

6:10 p.m. update:  A vigil is being held to remember the 9 victims of the San Jose VTA mass shooting:

A Biden administration official says that the gunman spoke of hating his workplace while he was detained by U.S. customs officers after a 2016 trip to the Philippines.

The official says a Department of Homeland Security memo detailed the statements by Samuel James Cassidy. The official saw the memo and detailed its contents to The Associated Press but was not authorized to speak publicly about an ongoing investigation.

Cassidy had a memo book that had notes on how he hated the Santa Clara Valley Transportation Authority. It said that when he was asked whether he had issues with people at work he said no.

The family of one of the victims of the shooting is speaking out about their loss.

They said in a statement, released by the Sikh Coalition, that Taptejdeep Singh tried to get his colleagues into safe places and calling others to not come into work during his final moments, according to an eyewitness.

"Even in these moments of chaos, Taptejdeep was living by the values of Sikhi: living in service and protection of others. We believe that if the shooter had ever asked our brother for help, Taptejdeep would have gone above and beyond for him like he did for everyone he crossed paths with," the family's statement read.

Singh was 36 years old and worked at the VTA for at least eight years. He leaves behind a wife and two kids, a three-year-old son and one-year-old daughter.

One of Singh's colleagues, Sukhvir Singh, not related to Taptejdeep, said that he got a call from Singh to warn him about the shooter.

"Taptejdeep called me to warn me that there was an active shooter in Building B and to go hide or get out immediately," Sukhvir said in a statement. "Because of him, so many people were able to go home to their families. We will never forget how he lived to the highest ideals of Sikhi in a moment of crisis, and my prayers are with his family and the families of all those who lost loved ones in this horrific attack."

The full statement from the family:

We are beyond devastated by the loss of Taptejdeep, a beloved father, husband, brother, son, and nephew. He was a wonderful person who was committed to serving others at work and in his free time.

We take some measure of comfort in what we have learned from eyewitnesses and others: Taptejdeep spent his final moments trying to keep others safe. From what we have heard, he reacted quickly to get colleagues into secure offices, and was frantically calling others who would have been coming in for a shift change to warn them about the shooter. We understand that he was attempting to secure his building when he was killed.

Even in these moments of chaos, Taptejdeep was living by the values of Sikhi: living in service and protection of others. We believe that if the shooter had ever asked our brother for help, Taptejdeep would have gone above and beyond for him like he did for everyone he crossed paths with; he never harmed anyone, and no one who knew him would ever want to harm him. We choose to remember Taptejdeep as the hero he was, both in those final moments and throughout his life of service.

During a press conference this morning, the Santa Clara County Sheriff Laurie Smith updated reporters with new information on the shooting that happened at the San Jose railyard on Wednesday.

The gunman, Samuel James Cassidy, had two semiautomatic handguns and 11 loaded magazines, according to the sheriff.

Smith also said that "materials for bombs, detonator cords, the precursors to an explosive" were all found in a locker at the railyard that they believe belonged to the gunman.

The Valley Transportation Authority (VTA) hosted a press conference to express condolences not only to the families of the victims of Wednesday's shooting, but also to come together in a time of tragedy.

Multiple chair people and employees of the VTA spoke at the press conference to give their condolences and many mentioned how much of a family the VTA is.

"We’re strong, we support each other and we’re a family. But today, I want to say the names of the nine that we lost of our VTA family," Evelynn Tran, acting General Manger and CEO of VTA, said.

She also mentioned how they do active shooter training at the VTA, but they weren't prepared for the aftermath of what happens after a shooting.

"We get up every morning, safe in the belief that when we go to work, we will come back to our family and loved ones. That did not happen for Adrian, Alex, Jose, Lars, Michael, Paul, Taptejdeep and Timothy," she said.

The VTA is joining the San Jose mayor and other city leaders at a vigil at San Jose City Hall tonight at 6 p.m. to honor the lives lost yesterday.

VTA has stopped light rail services until further notice due to one of the stations being closed, the ongoing investigation and workers are dealing with the tragedy of what happened. There will be bus lines going through the route of the light rail in its place.

The VTA does not want to make anyone have to work before they have enough time to grieve.

The Santa Clara County Sheriff's Department has reported that the gunman from Wednesday's mass shooting in San Jose had two semi-automatic pistols and 11 magazines full of ammunition, according to ABC7 in the Bay Area.

The mass shooting at the Santa Clara Valley Transportation Authority (VTA) in San Jose resulted in 10 people, including the gunman, dead. Late Wednesday, Alex Fritch was identified as a ninth victim after he died in the hospital.

The shooter was identified as Samuel James Cassidy.

In a news release from the VTA, they confirmed the suspected shooter was a VTA employee. He was found dead near the Guadalupe Yard where the attack took place. The facility is a transit control center that stores trains and has a maintenance yard.

Sheriff Laurie Smith also told ABC7 that within the past year, the Santa Clara County Sheriff's Department held a mass shooter training at the VTA Center.

The ex-wife of Samuel Cassidy says even more than a decade ago, he was often resentful of his work and had talked about killing people at work.

A 10 a.m. press conference is scheduled at the VTA Center to provide the latest updates.

1 / 23
AP
Valley Transportation Authority workers cross Younger Avenue near the scene of a mass shooting in San Jose, Calif., on Wednesday, May 26. 2021. Gunfire erupted Wednesday at a railyard in San Jose, and a sheriff's spokesman said multiple people were killed and wounded and that the suspect was dead. (Randy Vazquez/Bay Area News Group via AP)

READ MORE ABOUT THE SAN JOSE MASS SHOOTING FROM ABC10: