Container homes provide options for Californians looking to build or rebuild in wildfire prone areas as well as parents of adult children still at home and those looking to build "granny flats", home offices, or backyard studios. 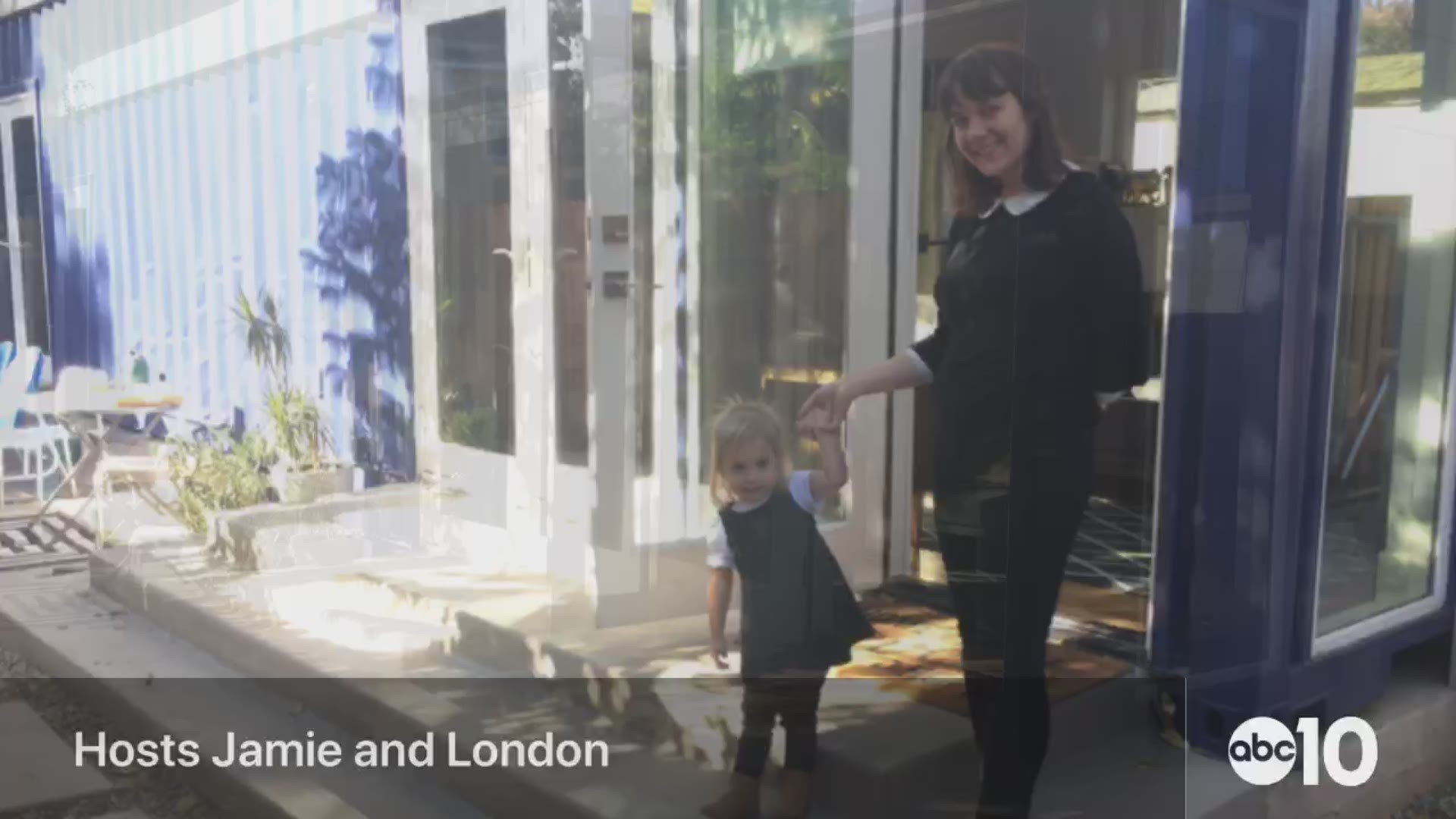 The tiny house movement dates back at least to 1987, but it gained steam and recognition in the past decade, through reality TV shows like "Tiny House Nation" and "Tiny House, Big Living."

The trend is still around. And while it might never become a staple in cities’ housing inventories, tiny homes have many possible uses, like home offices or studios, “granny flats”, space for adult children still at home, and Airbnb units.

A subset of the tiny home movement, container homes, promises greater flexibility, sturdy, fire-resistant construction, and a recycling sensibility for residents looking at options to build, or, as many Californians affected by wildfire are contemplating, to rebuild.

When Jamie Leonardo and her husband moved into their home in Oak Park, there was a substandard one-bedroom granny flat in the backyard. It was so substandard, in fact, it had to be torn down before their bank would sign off on the mortgage. But they’d always envisioned having a multiple-dwelling property, be it a duplex, granny flat or otherwise.

When they came upon the option of turning a shipping container into a tiny home, they were hooked.

Leonardo’s container house was TAYNR’s first project, completed early this year. It is also the first shipping container dwelling in Sacramento. TAYNR is a Sacramento-based company that manufactures houses at a cavernous warehouse at the site of former McClellan Air Force Base.

It took a bit of doing, mostly because, as container homes are a relatively new phenomenon, the permitting process was long and fraught with setbacks – including finding out that the city had incorrectly approved the first foundation, forcing them to tear down their work and start over.

“We did a lot of back and forth with the city over getting the permits approved and everything like that. So, it was a long drawn out process,” Leonardo said. “So, it should be easier now for other people who do it, but for us it took a really long time to get it approved.”

In the end, despite the difficulties, Leonardo said the project was worth it. They love the way it turned out. It increased the value of their property and gave them plenty of options for use. Although they’d first thought of renting to a tenant, they decided to give Airbnb a try. With a lockbox and separate gated entrance, that has proved to be a successful endeavor.

The space is bright, cozy, and crisp as a new dollar bill, with all the conveniences of a full (if downsized) kitchen, bath, bed and sitting room (which also converts to another bedroom with a futon bed). And their Airbnb reviews are glowing.

“We loved our stay, and the personal touches, like the letterboard note [that] made us feel extra special,” said Danielle of Whitesville, Kentucky. “Maybe out of nerdiness, but I especially loved that this place is located on ‘Diagon Alley’ and there was a copy of Harry Potter in the home.”

The Diagon Alley name is not a coincidence. When the backyard building was permitted, the city gave it an address, and the family had the option to name the alley – for a little extra cost – which they took. They submitted several name choices, and Diagon was the one approved.

Trish Grosjean, a TAYNR salesperson, said interest in the steel-walled houses has been brisk in the aftermath of a series of fires that have destroyed thousands of homes in the past two years.

Sea containers are designed to carry 30 metric tons of cargo, so they are very strong and sturdy. Cutting windows, doors and partitions weakens them somewhat, but those areas are reinforced in the building process. Shipping containers are made to withstand the elements such as hurricane, fire, tornado, or flood.

If the idea of living in a sea shipping container appeals to you, there are a few things you need to know.

Banks have not yet got behind the container homes, so financing is not typically available, Grosjean said. Those with money in hand to buy one should be prepared for some hiccups in the permitting process, as municipalities mostly aren’t experienced in assessing and permitting container homes, as the Leonardos found with their project.

Zoning restrictions vary. In California, a tiny home as a single-family dwelling might not cut it, simply because of size.

Tiny homes not on wheels must conform to state building codes, said Laurie Slothower of Sacramento County, explaining the Department of Housing and Community Development’s most recent memo on the subject (tiny homes on wheels must follow the rules for recreational vehicles).

State building requirements mandate a minimum of one room at least 120 square feet, floor area not less than 70 square feet for other rooms, a kitchen sink, cooking appliance and refrigerator with a clear space of at least 30 inches.

“Houses that are 400 square feet or less may have difficulty meeting those requirements,” she said in an email.

Some cities, such as Fresno, have embraced tiny homes as part of the solution to their housing inventory problems.

However, container homes don’t have to be tiny homes. At the TAYNR warehouse, four containers in the early stages of their transformation awaited assembly into a small, but “normal sized” two-story house.

Used shipping containers can be beat up and dinged from their life at sea. Some who see the models at home shows say things like, “Well, it’s cool, but it looks all beat up,” Grosjean said, adding, “Well, it’s recycled. That’s exactly why it is beat up, because it used to be a sea container on a ship.”

For people who feel that way, who like the modular look but fret about the imperfections, there are options. They can install siding that completely disguises the home’s origins. Or TAYNR has other options for a modular home look without the reused sea containers. FRAMECAD is an innovative design and building system that promises lower cost and quicker construction, Grosjean said.

Change can be difficult, and many people gravitate toward what they are used to, without considering alternatives. Sea containers can be turned into strong, fire-resistant dwellings that are spacious and comfortable, and while some see a dinged-up container as unappealing, perhaps they are missing out on its wabi sabi appeal -- each dent a battle scar reflecting the adventure of a life at sea.

Aesthetics aside, residents of regions that regularly experience natural disasters like wildfire, hurricanes, tornados and floods, might do well to keep an open mind about alternatives, whether they are container homes or monolithic domes or otherwise.

“There are thousands and thousands of sea containers sitting in Puerto Rico. but where do you think people want to live? They want their little houses rebuilt -- but imagine what sea containers could do for tornado-stricken areas,” Grosjean said.

1 / 10
Matt and Jamie Leonardo were the first to build a tiny home in Sacramento. They use it as an Airbnb, but the building offers many options. Photo: Sarah Moore