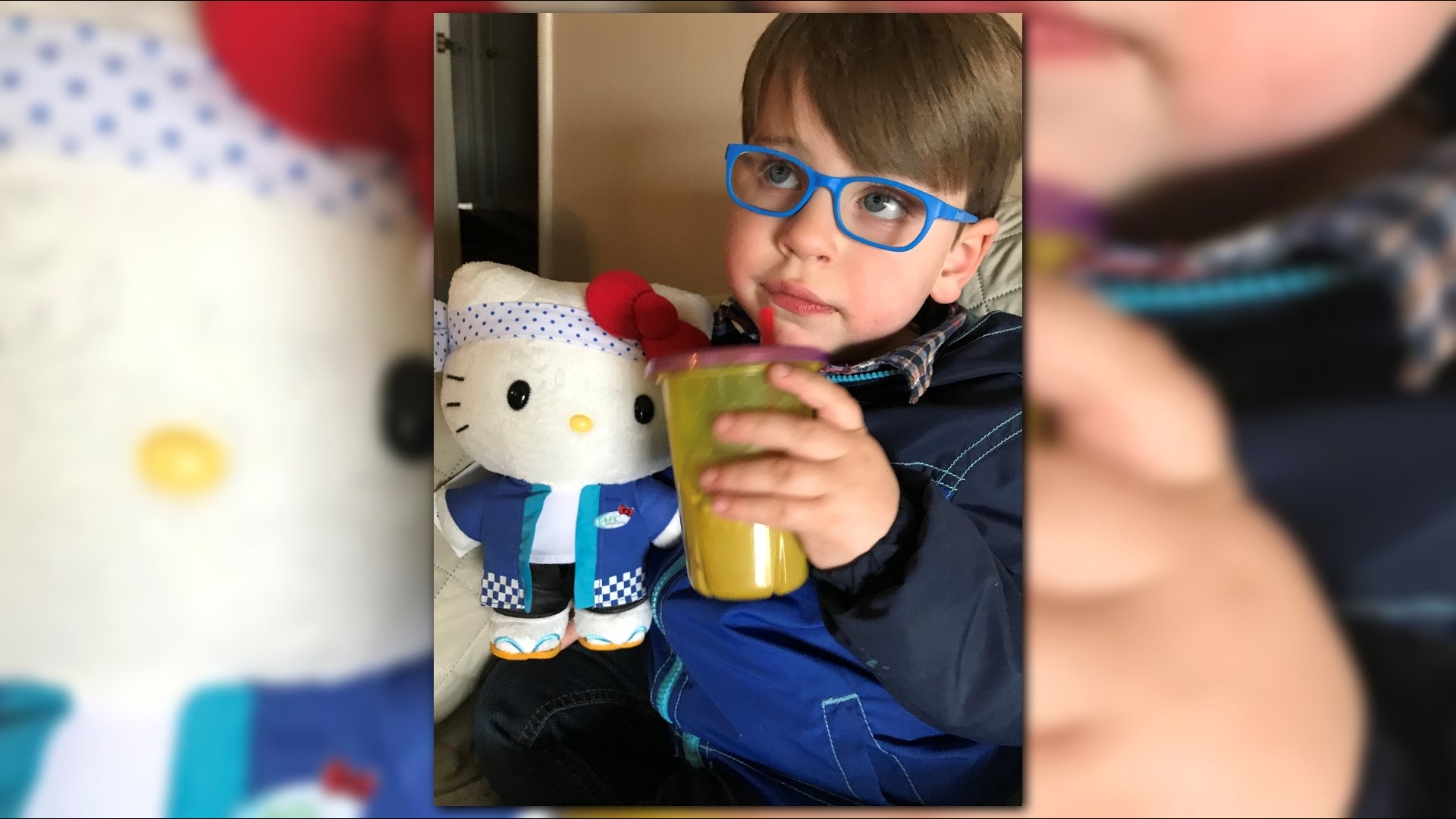 ELK GROVE, Calif. — Going to the grocery store may seem like a tedious task most of us have to do on a regular basis, but for 3-year-old Tyler Richards, the errand is an adventure.

The West Sacramento boy has an inexplicable love of grocery stores.

Recently, Tyler's mom, Katie Richards, reached out to a local Bel Air to ask if her son could have a behind-the-scenes tour of the market. She explained that Tyler was recently been diagnosed with an inoperable brain tumor.

When the Elk Grove Bel Air on Waterman Road heard Tyler's story, they immediately agreed to give Tyler a tour - and then some.

“Boy oh boy, it was above our dreams! It was amazing," Katie said.

The grocery store not only gave Tyler that personal tour, but employees also banded together to purchase the boy his own personalized shopping cart, fund his very own shopping spree and named him "Employee of the Day."

“It just felt good to see him experience his own shopping experience," Ronnie said. "You know, usually he’s following us and we’re trying to control him, so letting him just go and pick off the shelf was pretty exciting.”

He even got his very own Bel Air hat, apron and name tag - all to keep.

“It made me think, 'Wow, there are so many good people out there,'" Katie said.

According to the store, Tyler used his shopping spree to buy things for his mom (coffee), dad (oranges), 5-year-old brother Nicolas and one-year-old sister Avery (fruit roll-ups), grandpa (pistachios) and one of the store's employees (deodorant), for which the other store employees thanked him.

“He was very generous. He made sure to get something for each one of us," Katie said.

The Richards say they feel wrapped in love and support from the community. The Quick Quack Car Wash location opening soon on Lake Washington Boulevard in West Sacramento has 'adopted' the family, supporting them and including them in the upcoming grand opening festivities. Katie said an Elk Grove printing company has approached the family about making shirts. The Richards have been in touch with the Make-A-Wish Foundation.

Katie first noticed symptoms in Tyler that concerned her when he was 11 months old. She said her baby would have tremors, his eyes would roll up into his head when he was picked up and that he didn't cry. For nearly a year and a half, Katie and her husband Ronnie Richards asked medical professionals if their son should get an MRI, but she said they kept getting the same answer: "don't worry, Tyler will eventually catch up with his peers developmentally."

Doctors ruled out autism. They ruled out seizures. The Richards knew in their gut that something was seriously wrong.

It wasn't until Tyler was two years old that he finally got an MRI on the suggestion of an Oakland neurologist last March.

“The diagnosis, it came after a year of searching for answers and being told, ‘Oh, he’s going to catch up. It’s a delay. It’s a global delay'," Katie said.

RELATED: Batkid saved San Francisco 5 years ago, and his cancer's been in remission ever since

That MRI revealed Tyler had a tumor that twisted itself through his brain. He's since been diagnosed with ganglioglioma, a rare form of brain tumor.

"It’s massive," Katie said. "It’s like five inches long, from the top of his right thalamus down through his cerebellum, and so it’s intertwined.”

By then the tumor had become inoperable, meaning Tyler will likely not survive, barring a breakthrough, experimental medication and procedures.

”After... finding out what it is, we decided that we were going to live every moment," Katie said, "And try to make his life as normal as possible and not let the diagnosis be who we are.”

“You certainly trust your doctors, but you just have to go with your gut," Ronnie said. "If something you expect to see is not there, you know, ask for a second opinion. Ask for another specialist. That’s what helped us.”

They know the past can't be changed, but they wonder whether an MRI when they first asked a doctor for one would have meant the difference between operable and inoperable.

“If we would’ve found this when we thought so, at one to two years ago — it could’ve been way smaller," Katie said.

While Tyler's condition has not gone downhill since his diagnosis, his parents know that difficult times lie ahead. That's why they're focusing on savoring every moment they have together. Since his diagnosis, the family has "met so many wonderful, wonderful organizations, charities, foundations," Katie said, including Keaton's Child Cancer Alliance, based out of Roseville.

“We’re just trying to spend the time as a family and then really enjoy each other," Ronnie said. “Seeing everybody with smiles is what we’re after.”

For now, Tyler is happy and stable, playing with his siblings and participating in physical and cognitive therapy. Because his tumor has not grown, he is not yet taking chemotherapy.

“We’ve learned, live moment to moment and there’s no time like the present," Katie added.

All senior students with special needs were celebrated as Kings and Queens at this special prom.