The Homemade Food Operations Act, now before the California State Senate, would allow the sale of food cooked in home kitchens. Public health officials oppose the bill, fearing an increase in foodborne illness, but supporters say the home cooks would be held to the same food handling standards as commercial counterparts. 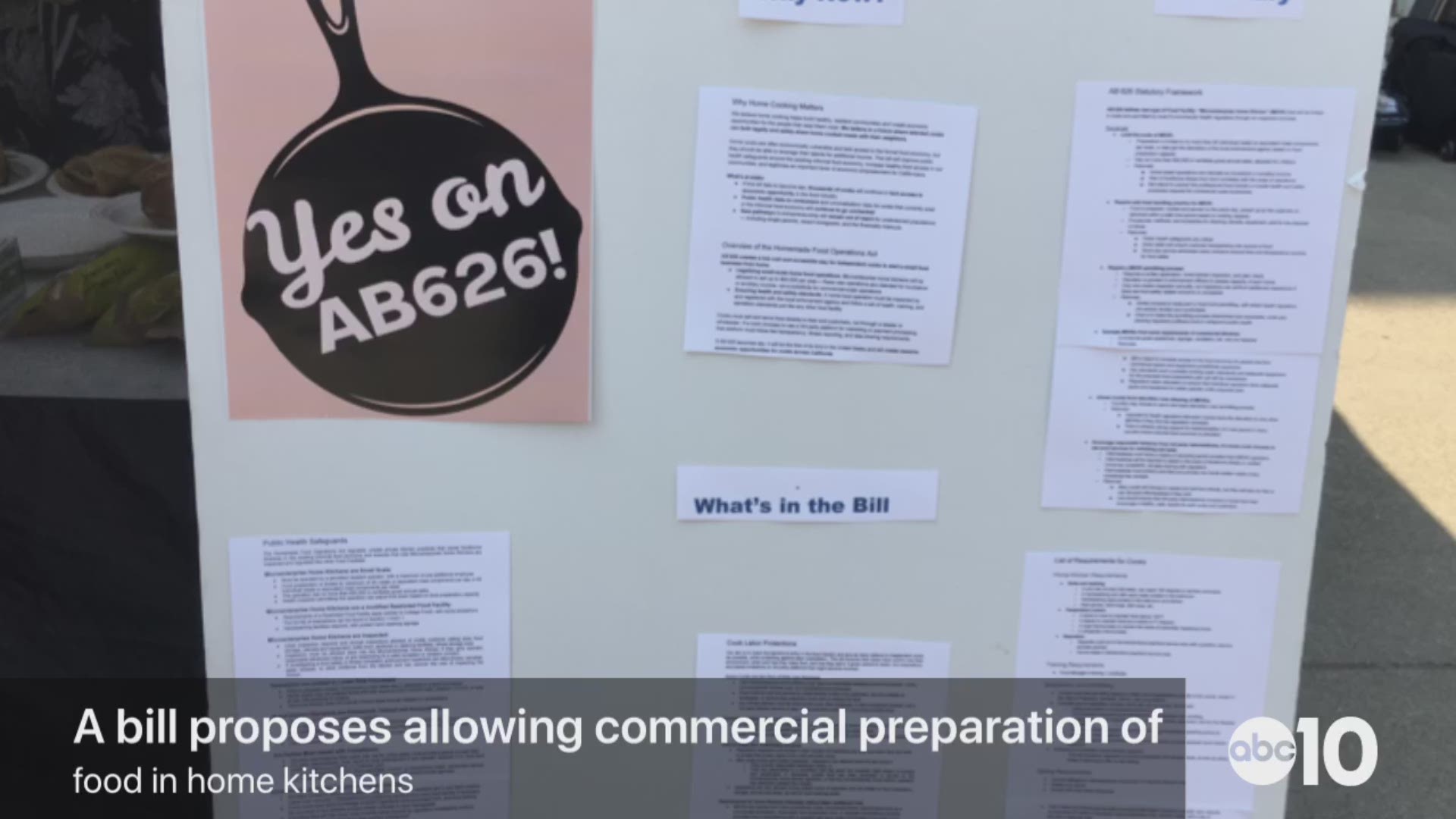 A California bill proposing to allow cooks to sell food prepared in their home kitchens has sparked debate on issues including health, safety, economics, and government oversight.

Assembly Bill 626, also known as the Homemade Food Operations Act, proposes to allow permits for small-scale food sales from home kitchens. Would-be home food entrepreneurs would have to pass an accredited food safety certification examination and their home kitchens would be inspected before a permit could be issued.

Home cooks would be required to follow the same food safety rules as commercial cooks, although some of the rules governing facilities would be waived (such as rules about certain types of equipment and availability of public restrooms). Although home cooks can have pets in their home, they would not be allowed in the kitchen and dining areas during food service and preparation.

The bill, authored by California Assemblyman Eduardo Garcia, would protect consumers by giving health officials access to kitchens where food is being prepared and by educating home cooks in proper food handling, according to its authors.

Customers would be able to eat in the cook’s home, pick up the food, or have it delivered to them, as long as it could be delivered within “a safe time period based on holding equipment capacity,” according to a legislative analysis of the bill.

The home cooks would only be allowed to sell directly to consumers, not to a wholesaler or retailer.

Supporters say the bill would give a leg up to small businesses, especially giving opportunities to women and minorities to generate income and serve their communities.

Creating a pathway for the sale of food out of home kitchens could be particularly beneficial in communities where restaurants and grocery stores are scarce, such as rural areas and urban "food deserts."

They have “tremendous concerns about the preparation of potentially hazardous foods in home kitchens, which are not built to the same code as commercial kitchens and which cannot be inspected as thoroughly.”

Peter Ruddock, a slow food advocate and supporter of the bill, said health officials said the same thing about the "cottage food" license when the legislature approved it several years ago. With a cottage food license, home cooks can prepare and sell foods like baked goods, candy and preserves with a relatively inexpensive license.

Groups like schools and churches can sell homemade baked goods as fundraisers, said Kelly McCoy, spokesperson for Sacramento County’s health department. But there are limits, she said. Cookies, cakes and pies are okay; enchiladas, casseroles or gumbo are not. And there are limits as to where they can be sold.

Sugary and fattening snacks, like cupcakes and cookies, are banned at bake sales on school grounds, McCoy said. In fact, schools don’t want parents to bring any homemade foods for students to share, due to allergy concerns. Store-bought foods that list ingredients are considered safer.

The Homemade Food Operations Act passed the California Assembly earlier this year, and it should go to the Senate floor for vote early next week, said Katie Valenzuela, the staff member in Garcia’s office who has been overseeing the bill’s passage through the state legislature.

If it is passed by the senate it would then go to Gov. Jerry Brown for his signature.

The Sustainable Economics Law Center raised the concern that home cooks could be exploited by third-party tech platforms, through which the cooks vend their wares.

The cooks themselves don’t appear to share those concerns. Cooks who attended a rally Wednesday at the capitol, including Aksay Prabhu, Brandi Mack, Gesche Langen and Mariza Ruelas.

Ruelas started selling food through a Facebook group a couple years ago. She was looking for a cake for her daughter’s quinceanera when she stumbled across the Facebook group. A lifelong cook, Ruelas was immediately drawn to the food group, and slowly started taking orders and sharing her culinary offerings – and bringing in some income to pay for things like her son’s karate classes.

She developed a devoted following with her tinga de pollo, a spicy marinated chicken dish. She made tinga tortas (sandwiches) and stuffed avocados some of her customers called "fire balls." Last year, Ruelas was charged with several misdemeanors for selling ceviche out of her Stockton home after investigators went after her and other people selling through the group. Now she’s an advocate of the Homemade Food Operations bill.

“I think everything happens for a reason,” Ruelas said in an interview at the Capitol. “So I don’t regret this, because without that I wouldn’t be here. They reached out to me and now I’m part of the board members (of) Cook Alliance. So it’s turning out to be something positive. You just turn something negative into something positive.”

Ruelas hopes the bill passes the senate. She wants to get back to work again. She will have to rebuild her client base, because she was ordered by the judge to shut everything down and leave the Facebook groups. But she’s up for it.

On a related note, a different kind of cooking show: