The video and audio made public on Friday includes body and dash cam footage from the officers first on the scene, and the 911 calls leading up the fatal shooting of Lorenzo Cruz. However, none of the video shows the moment Cruz was shot by the three officers. 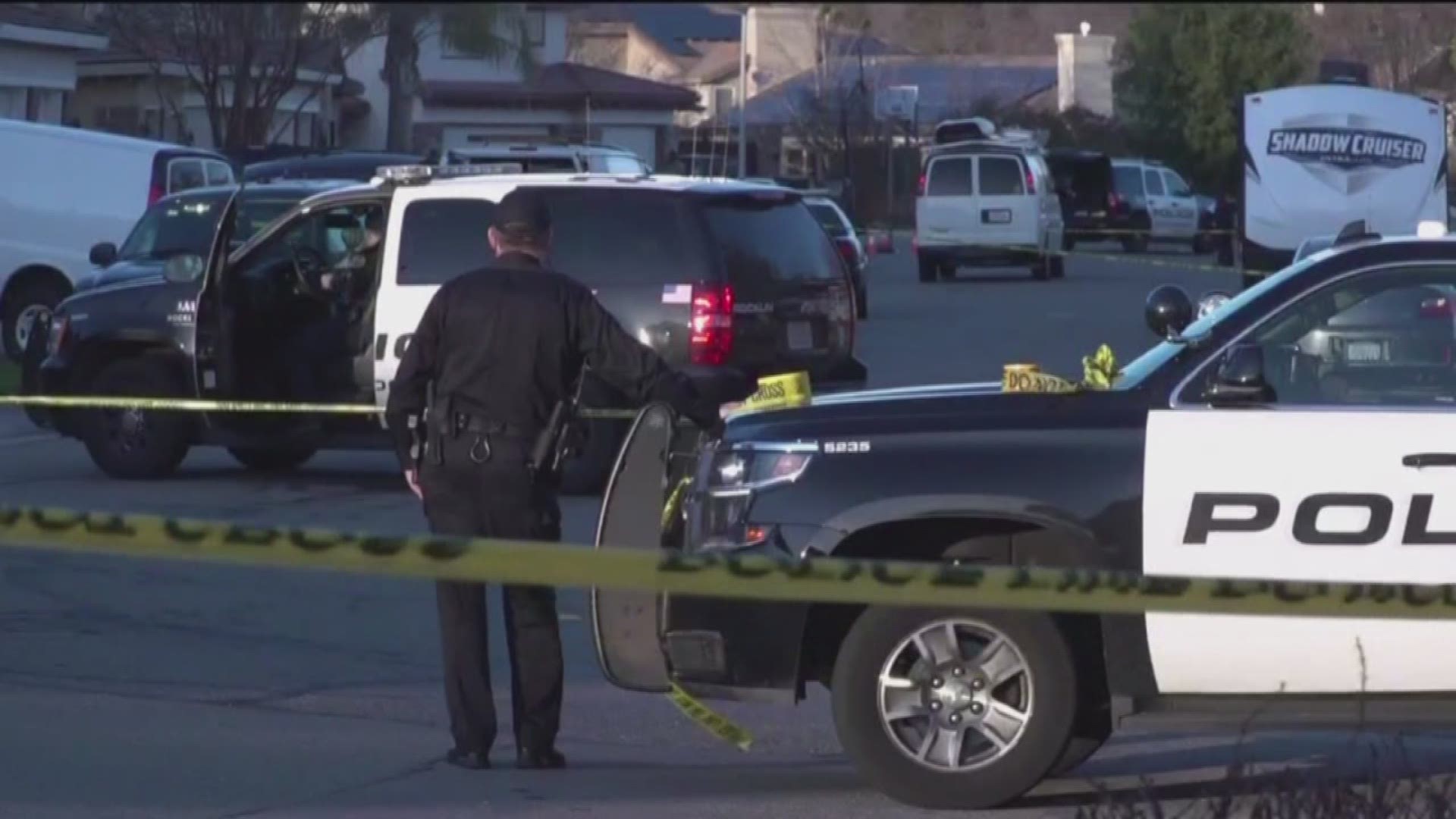 The Rocklin Police Department released hours of audio and video from the February officer-involved shooting of a 23-year-old man in possession of a BB gun, months after the Placer County District Attorney cleared the three officers involved of any wrongdoing.

The video and audio made public on Friday includes body and dash cam footage from the officers first on the scene, and the 911 calls leading up the fatal shooting of Lorenzo Cruz. However, none of the video shows the moment Cruz was shot by the three officers.

“Our office has concluded that there is no evidence of any criminal conduct on the part of the involved officers,” Owens wrote in a statement, “or any evidence of inappropriate conduct that would warrant and action by this officer.”

Kellan Patterson, Cruz' family attorney told ABC 10, "It is ludacris that the officers did not turn on thier body cameras until after they killed Cruz".

Patterson said the information released by the Rocklin Police Department does not answer the questions that the family has, like whether or not deadly force was appropriate. He said the narrative changed throughout the morning and Rocklin Police made him look like an aggressor.

According to Rocklin Police Lt. Scott Horrillo, the three officers were placed back on active duty about two weeks after the shooting.

When asked about the time between the DA’s investigation and the release of the video, Lt. Horrillo said that witness and neighbors identities needed to be redacted before release.

Horrillo also said that the department wanted to allow Cruz’s family to see the video first.

In addition to the video and audio, Rocklin police released extensive documentation from the department’s investigation into the shooting.

This is how the incident played out, according to a review of the video, audio and police reports by ABC10 News:

Just after 8:35 a.m. on February 25, Rocklin Police Officer Gregory Jensen attempted to pull over the driver of a gray Daewoo—who was later identified as Cruz—for expired tags, but the car drove off. According to his statement, Jensen stopped pursuing the car after the driver ran a red light and made a left turn onto S. Whitney Boulevard.

In his written report of the incident, Jensen wrote he didn’t continue the chase because “the driver was clearly driving in a manner where he clearly wanted to get away and his driving behavior of running the red arrow was willing to create an environment where the was endanger.”

Sometime around 9:45 a.m., several witnesses began calling 911 to report a silver car that was driving recklessly and crashing into two gates near Hillcrest Road. According to one call, the witness saw “an individual driving in a residential neighborhood with a flat tire and he’s speeding… he tried to play chicken with someone.”

“He tried to get into our yard, then he crashed into our trailer out front, and now he just broke into the house,” the woman can be heard saying in the 911 call.

The woman told the operator that her husband was armed with his gun and went downstairs to confront the man who broke into the house.

About three minutes into her phone call with the 911 operator, the woman reported that she heard gun shots.

“Oh no,” she said from inside her closet. “Oh, I’m hearing gunshots. Oh my God.”

“What did you say,” the operator responded.

“I think I’m hearing gunshots going off,” the woman repeats. “A bunch. Oh my god.”

“… then he heard shooting.”

The shots the woman heard came from outside her house, and not from her husband.

According to records, officers Breanna Adams, John Constable and Cpl. Chris Osborne were the first to respond to the forced entry call on Bradford Place. In each of their statements, the officers said they saw Cruz holding a weapon, but could not make out what it was.

Officers said Cruz then entered a dark gray Honda that was parked in a residential driveway.

Constable was the first officer to get out of his marked SUV. In dash cam video, Constable can be seen running out of his vehicle with his gun drawn, toward the direction the Honda the Cruz was sitting in. (The Honda is not in the view of any of the dash cam video.)

At this point, with both police vehicles facing away from the driveway and no body cameras activated, no video or sound captured the moment of the shooting.

According to Constable’s statement, he pointed his gun at Cruz who he said “appeared panicky and frantic as he was looking around.”

Constable said he believed Cruz would start a “shoot-out” or kill one of the officers because he wouldn’t put the gun down, despite his command. He then began to fire.

Constable did not turn on his body camera at any point before or after the shooting.

Officer Adams was positioned behind her SUV with sight of Cruz in the Honda. She said she, too, began shooting until “she could see that Cruz was no longer moving.”

Osborne said he went to the front passenger side of the Honda, where he “had clear view into the vehicle and saw Cruz moving around.” After hearing Constable command Cruz to drop his gun, Osborne said he “saw Cruz holding a weapon [in] his hands (for a split second), and then he heard shooting.”

According to his statement, Osborne said he believed Cruz was shooting at Constable, so he “fired his firearm at Cruz”

Seconds later, Officer Gregory Jensen arrived to the Honda. The rest of the day can be seen in the hours of dash and body camera videos.

“… there was clearly no pulse.”

“Sir, can you please get back inside your house,” Officer Adams is heard asking, almost immediately after her body camera was turned on.

Moments after Adams’ body camera was activated, Jensen is seen working to pull Cruz’s body out of the Honda. There was hesitancy, however, as officers were unclear if Cruz would fire the “silver handgun” that they saw in the car.

“He’s got a gun under his hand,” Officer Osborne is heard saying.

Another officer (it is unclear whether it’s Jensen or Constable) repeated, “He’s got a gun under his hand.”

“His head is moving. Is that from you, John,” Osborne asks.

“No, he’s not touching him,” Adams replied.

Soon after, Jensen is seen removing Cruz from the car and telling the other officers to get the medical bag. He began to do CPR, but it was unsuccessful.

Jensen said he then checked Cruz’s left wrist, but that “there was clearly no pulse.” Fire personnel announced Cruz dead at 10:22 a.m.

Officers Adams and Osborne are later seen on video talking to the owner of the Honda that Cruz was sitting in when he was shot. They also spoke to the husband of the woman who called 911 from her locked closet after Cruz broke into their home.

According to police records, the owner of the Honda left his car doors unlocked when he arrived home at 9:30 that morning. He said that he heard six to seven shots, looked outside, and heard the female officer “say something like, ‘did you see, he pointed the gun at me.”

During the investigation, officers determined that the silver handgun was actually a BB gun that was painted silver to conceal the plastic orange tip.

The owner of the Honda would later tell police that he owned two BB guns, but that both of them were in his home and accounted for.

A toxicology report showed that Cruz had THC, amphetamine and methamphetamine in his system at the time of the shooting. According to the family attorney Kellan Patterson, the family was unaware Cruz tried any drugs other than marijuana. Patterson said Cruz was an honor student in high school and was registered for college.