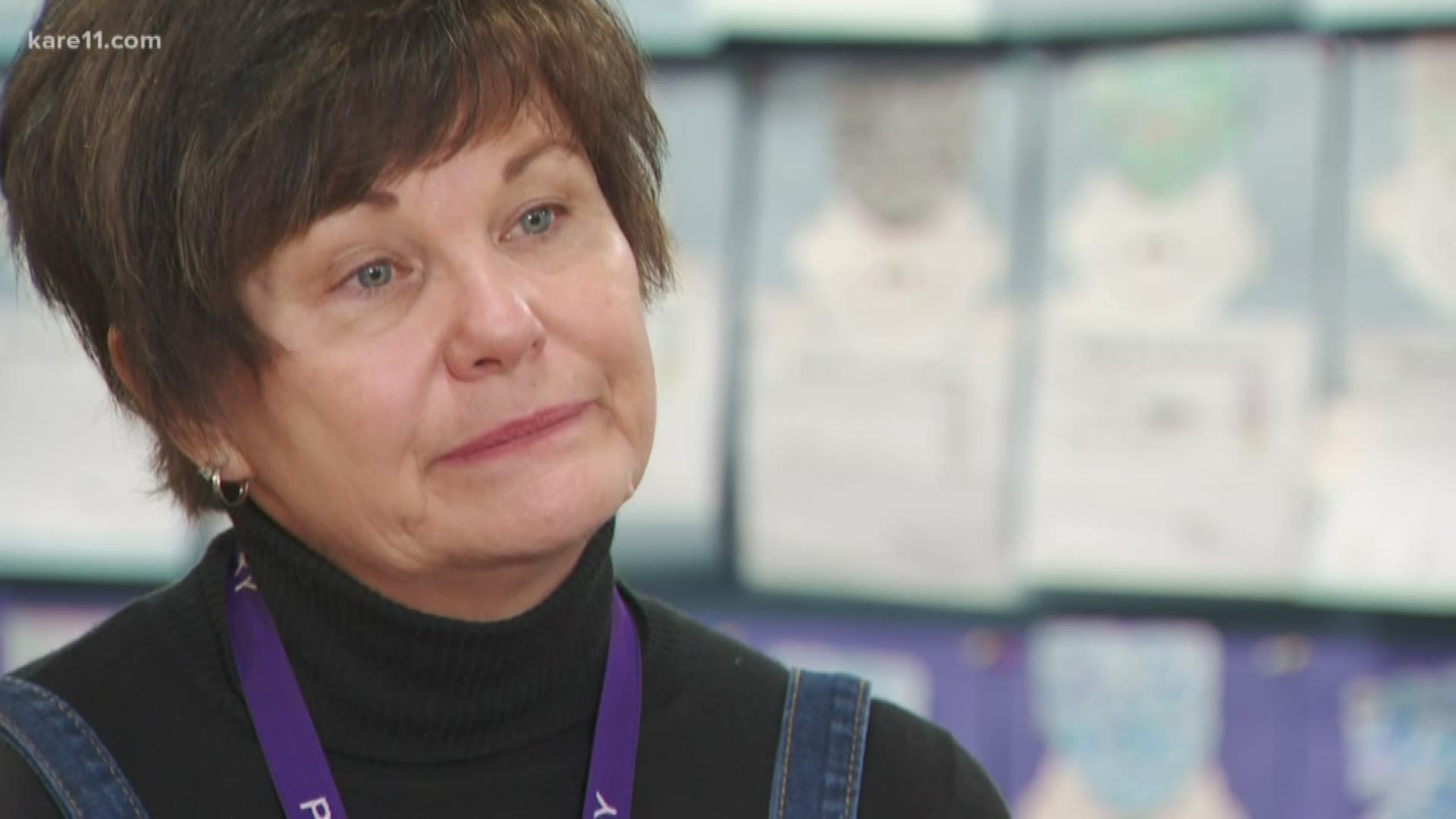 ELLSWORTH, Wis. — It took Lynette Winger nearly half the school year to report for her first day of classes.

The late start brought no consternation from Lynette’s co-workers.

In fact, they packed a section of bleachers in the elementary school gym for a surprise welcome back that brought Lynette, a teaching assistant, to tears.

Credit: Chad Nelson, KARE
Lynette Winger is welcomed back to Ellsworth Elementary School by a co-worker after Lynette's heart attack.

“Statistics say that we shouldn't be celebrating this, that we should have planned a funeral,” Kayla Zimmer, Lynette’s daughter says. “So, it’s super-special.”

On August 24th, at the family cabin, Lynette suffered a massive heart attack.

After months of medical treatment and therapy, Lynette knows how lucky she is.

“They told me there was no pulse, I was not breathing,” she says of her conversations with medical professionals. “They shared that most people don’t come out of it.”

Lynette’s heart attack was the type sometimes called a “widow maker” due to its deadly outcomes.

Her daughter Alyssa Matzek was staying at the cabin when it happened.  She heard a clunk, got out of bed and found her mother face down on the floor.

“In my mind there was not a choice, you've got to do this,” she says.

“Dad helped me,” she says. “He did the breaths while I did the compressions.”

Together Alyssa and her dad kept Lynette alive until the ambulance arrived.

Lynette’s daughter and husband saved her life – 25 years to the week after Lynette’s 17-year-old son lost his.

Credit: Chad Nelson, KARE
Josh Winger was 17 when he died at school of a heart attack.

In August of 1994, Josh Winger – a solidly-built three sport athlete – was running on the Ellsworth high school track.

He walked into the gym and collapsed from an undiagnosed heart condition.

Josh’s coaches worked desperately to save him using the CPR they too had learned.

Yet, the damage to Josh’s heart was too great. They couldn't bring him back.

Josh’s youngest sister Kayla was 6-years-old when she lost her big brother.

“I remember my parents coming home after they found out he passed away and remember how awful of a time that was,” Kayla Zimmer says as tears well in her eyes.

“I remember my mom getting out of the car and just going down on her knees in the yard and just screaming,” Kayla continues.

No parent gets over such a loss, but 25 years later as Josh's mom hung in the balance between life and death, she believes her son was with her.

“I know he was,” Lynette Winger says.

Lynette also carried, for 8 months, a second son who was stillborn.

“I saw both of them,” Lynette says.

The mother who lost two sons has had time to ponder why she lived through a heart attack that has claimed others.  “I don’t know,” Lynette says, “but I’m hoping there’s more for me share.”

On her first day back at school, the day brought co-workers, friends and family to welcome Lynette.

They stood in line in the gym, waiting for their chance to hug Lynette and express their love.

Just what she needed to keep her broken heart healing.