'My son almost died.' Mom issues warning after son is diagnosed with MIS-C which is connected to COVID-19 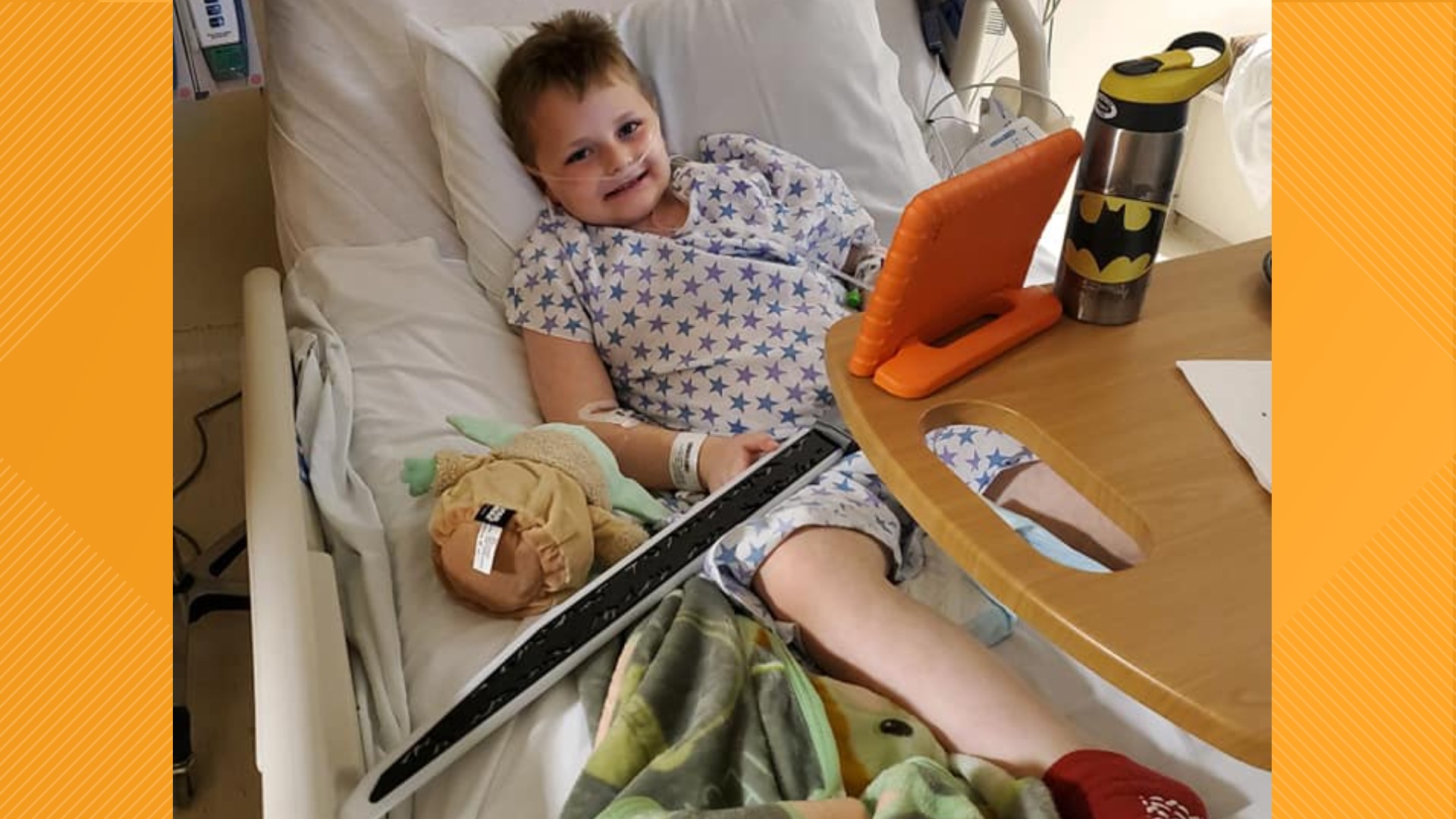 LOUISVILLE, Ky. — Doctors say they're seeing an increase in kids with the virus and some children are developing complications after the fact.

WHAS11's Kristin Goodwillie talked with one mom whose 6-year-old child is still in the hospital, but doing much better than a week ago.

He is being treated for MIS-C (multi-system inflammatory syndrome in children). According to doctors, it's a direct result of having the virus.

While the numbers are still small, Norton Healthcare has only seen about a dozen children with it.

Grant Waters case is one of the worst the hospital's seen. Water, is your normal, happy Kindergartner.

"He's always been healthy, so that's why it was weird when he complained of a headache and tiredness on Thursday, November 6th. He later threw up that afternoon and complained of a stomach ache," Grant's mom Elizabeth Waters said.

Thursday night he woke mom Elizbeth up saying he was having really intense dreams.

"We brought him to the bathroom and checked his temperature and it was 105.2," Waters said.

For the next two days, Waters said they went to doctors and hospitals. Every test came back negative. Strep throat even COVID-19. On Saturday is when they started doing more tests and all of his levels were higher than normal.

"The antibody test was positive. So he had COVID at one point, but he didn't have it now," she said.

Grant was diagnosed with MIS-C.

"One of the worrisome things is, some of the children who develop the inflammatory syndrome don't even know that they're infected," Pediatric Infectious Disease Physician Dr. Kris Bryant said.

Grant is one of those kids. Elizabeth Waters said the only indication was her father who had COVID in early October.

"Think of it as multiple organs in the body being inflamed. It seems to happen 2-4 weeks after COVID-19 infection in children. I think we've treated more than a dozen children," Dr. Bryant confirms.

That's just at Norton Children's Hospital. Nationally 1160 children have been with MIS-C and 20 have died. Those numbers were updated on October 30th.

Doctors told Waters that children have died from this syndrome. "And that was so shocking because he wasn't that sick and I almost didn't take him to the doctor the day before and they were telling us there's a good chance that he could die," Elizabeth Waters said.

She said after Grant's heart rate got higher doctors ended up having to put him on a high dose of oxygen. Yesterday he was taken off oxygen and is currently moving out of the ICU.

"It's only been a few days and it's been the longest few days of my life," a somewhat relieved Waters said.

Grant's fun-loving personality is coming back, but his parents still fear any flare ups. Doctors and specialists still don't know the long term consequences of MIS-C.

"My son almost died, so that theory that only the vulnerable population needs to be careful to protect themselves is ridiculous, that's not true," Waters warns.

While MIS-C is a rare complication, it can affect any child, no matter how healthy they are, doctors said.

Doctors are still researching but said for reasons they haven't determined yet: 75% of children with the syndrome are Hispanic or black.

Symptoms can include fever, belly pain, vomiting and diarrhea, red eyes and a rash.

Grant's mom has created a Facebook page to share their experience so other parents can know what to look for.

►Make it easy to keep up-to-date with more stories like this. Download the WHAS11 News app now. For Apple or Android users.