The idea started by a teacher who asked her students part of the school's 'Link Crew', who mentor freshman, what they wanted to do for an upcoming Random Acts of Kindness Week. 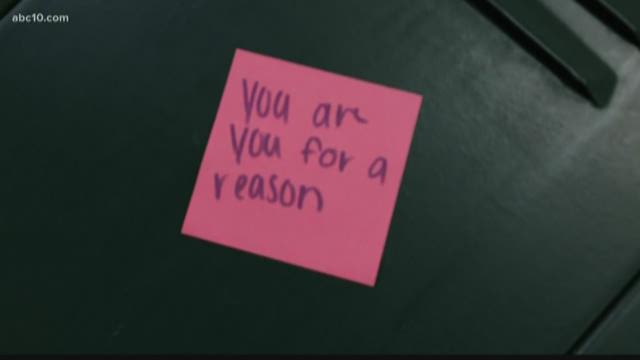 At Manteca High School, 1600 "post it's" of all different colors are plastered on 1600 lockers.

Each note has a hand written, positive message saying things ike "you rock" or "have a great day."

"It has a really big impact on not just myself, but everyone. Like everyone has that moment where they read it and they smile and they like it," said student Rodrigo Gonzalez.

:"It really matters to some people what you say and what they see everyday because not that many people get a chance of getting a complement everyday," said senior Selena Lopez.

The idea began in teacher Maryann Tolbert's classroom last week. Her students are part of the school's 'Link Crew' which mentors freshmen, and she asked her students what they wanted to do for an upcoming Random Acts of Kindness Week.

The students collectively chose to write inspirational sayings on "post it" notes.

The notes were placed on lockers on Thursday morning, and the feedback has been positive from students and staff. The inspiring gesture could not have come at a more opportune time in the wake of the school shooting in Florida that killed 17 people.

"So on the calendar it showed "Random Acts of Kindness" so we decided last week to go ahead and take that upon ourselves and laid out a plan. And it kind of took a life of it's own that we did not see coming," said Tolbert, who's also a Government and Economics teacher.

A day after the sticky notes were put up, most of them were still attached to each school locker.