As the school year begins, the Manteca teachers' union and school district have been countering each other point for point over worker protections and safety. 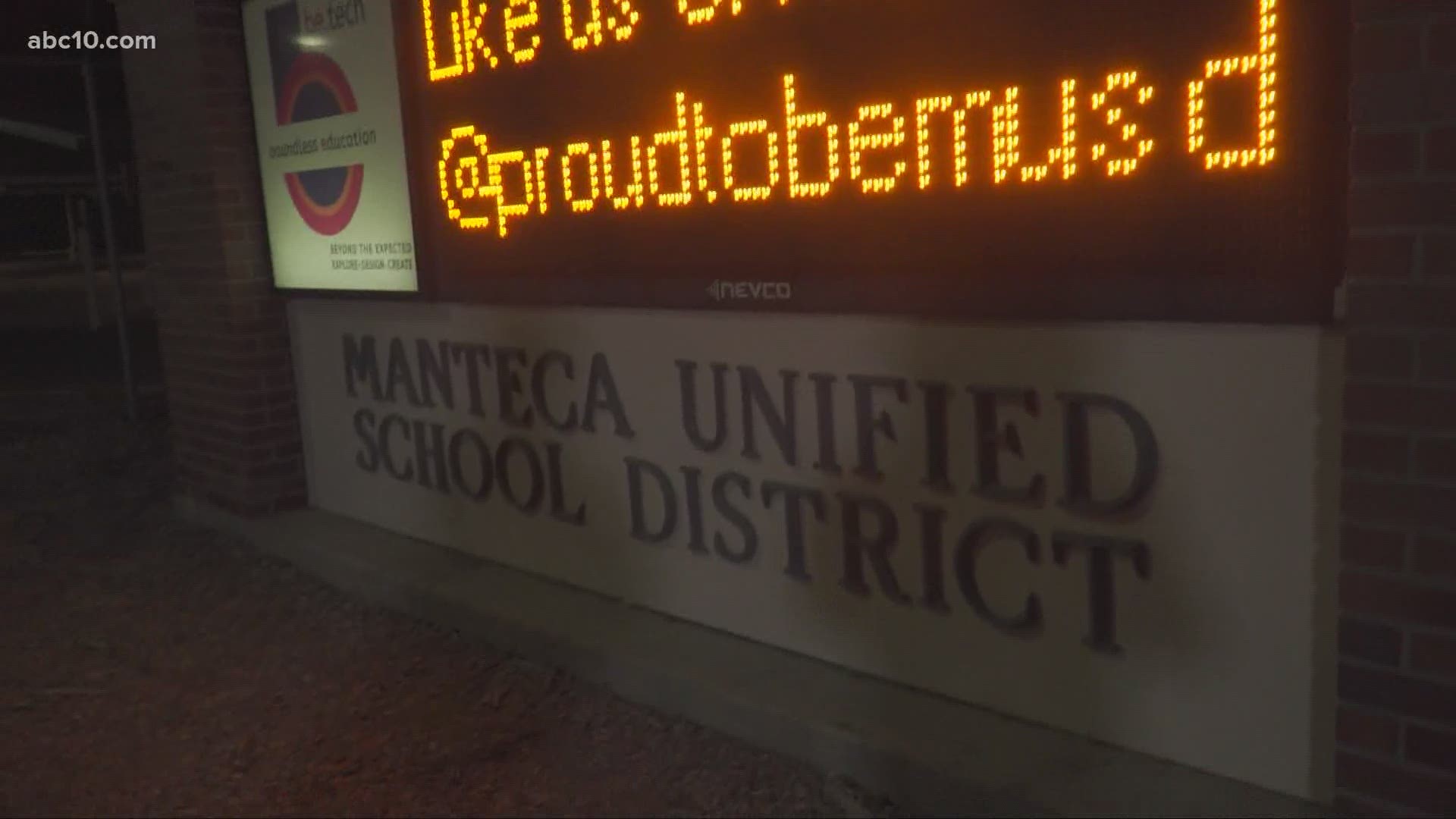 MANTECA, Calif. — It’s been less than a week since Manteca Unified School District [MUSD] teachers returned to their classrooms for start distance learning, and in that time, the district has confirmed two coronavirus cases among their employees.

“We have two self-reported positive cases of COVID-19 since the start of the academic year in two different schools,” Victoria Brunn, spokesperson for Manteca Unified, said. “Those communities were notified upon identification.”

Brunn identified the locations as Joshua Cowell Elementary School and the Adult Transition Program. She said neither case was workplace acquired.

However, the Manteca Educator's Association [MEA], the local teacher’s union, is skeptical about the district’s comments. The union and the district have countered each other point for point regarding worker safety.

“I think their comments and the story they’re trying to tell is expected, because they’re trying to cover it up,” Ken Johnson, president of the MEA, said. “They’re not really telling the whole story and what the real facts are.”

By his account, Johnson said five schools have people quarantined or infected with COVID-19. He believes at least 21 staff members between two different schools have had to quarantine since school began and some classrooms have been taped off to prevent access.

Brunn said those numbers weren’t reflective of their current quarantined or self-monitoring employees because those numbers shift daily based on exposure or possibility of exposure. She added that the classrooms were taped off for cleanings.

“At any given time, we may have employees that are directed to quarantine based on a self-screening protocol and to mitigate for the spread of COVID-19,” Brunn said. “MUSD feels it is critical to care for all staff and families, thus far our exposures are non-workplace.”

She added that the quarantines and isolating in the workplace are meant to let the district respond quickly to issues during the pandemic, which it insists it's doing what it can to keep teachers safe on the campus and said their efforts have helped them to prevent workplace transmission at this time. However, the teachers’ union is not convinced and want the option to work from home.

“Even if you’re working in your own classroom, people will come together, either parents on campus to pick up things… we had parents coming on to pick up books and laptops and school schedules,” Johnson said. “So, some of our staff were exposed to upwards of 1,500 people. That’s just not safe to be doing this sort of thing when we could do it from home like everybody else is.”

He said a recent survey for members showed 95% of teachers didn’t want to be on campus or at least wanted to be given a choice to work from home.

“Leave it up to the professional judgement of the teachers,” Johnson said. “We’re anxious to get back to class with our students, but we want to do it safely.”

He pointed to the Personal Protective Equipment that the district gave them to start the year. He said teachers didn’t have hand sanitizer, were given masks that weren’t form fitting, and thermometers without batteries.

Ultimately, Johnson said the issues boil down to one thing, the option to work from home. Teachers will be staging a car rally, driving around the district office and honking their horns, to convey their message to the district.

“We’re trusted to provide excellent instruction, but we’re not trusted to teach from home and that’s the real point of the matter,” Johnson said.

Manteca Unified previously told ABC10 that the decision to keep teachers in the classroom was meant to provide consistency in an unpredictable school year. They added that "consistency and social-emotional connection for children is much greater and more powerful when teachers are able to rely on their resources."