The museum focuses on Chinese American history that's been forgotten, and it begins with the lost Chinatowns of the Gold Rush Era. 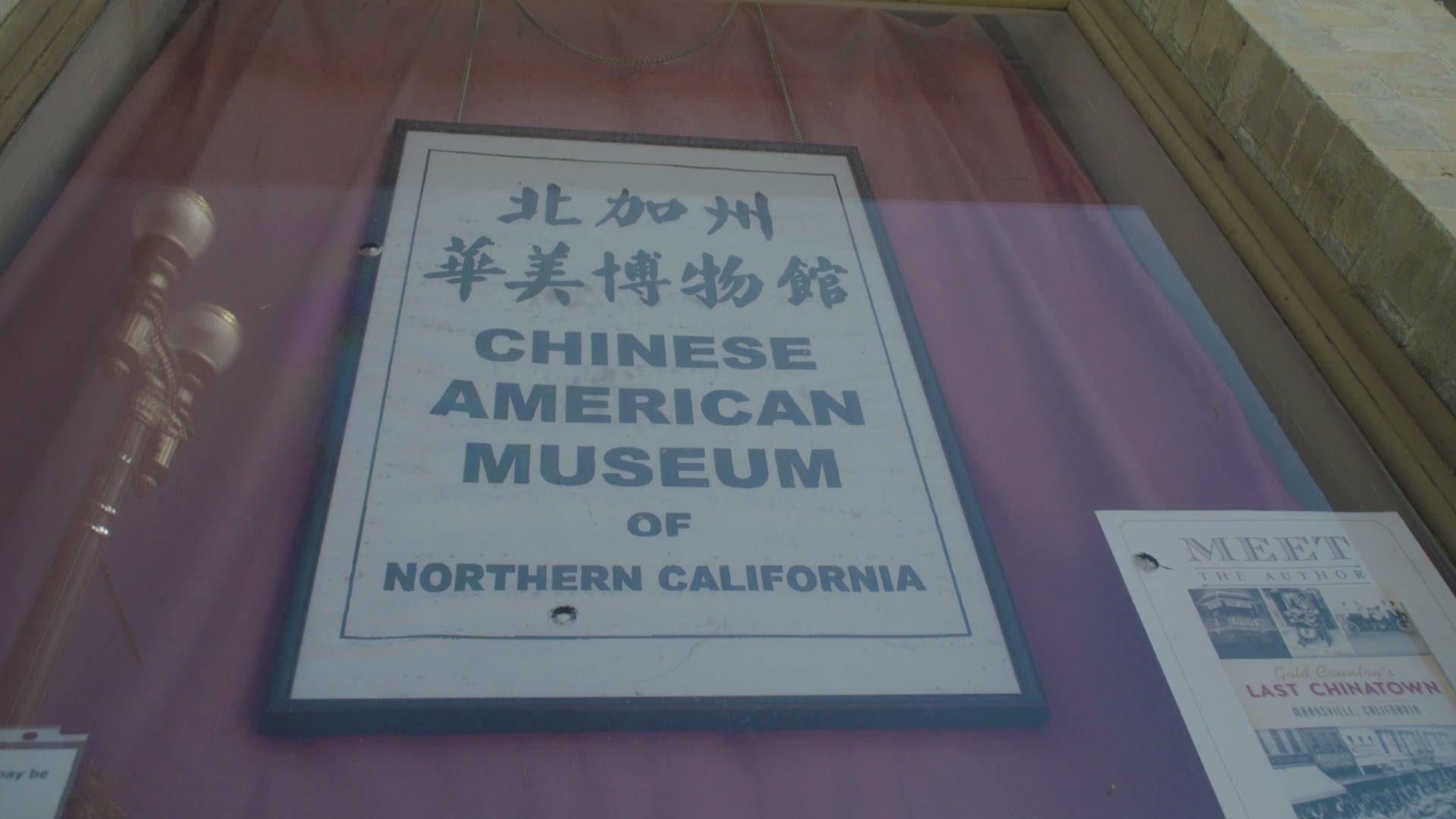 MARYSVILLE, Calif. — The California Gold Rush is often explored in textbooks as a time when the world rushed in to strike it rich but doesn’t quite get into the benefits and successes Chinese settlers were able to achieve, not only in the US, but in China. The focus of the Chinese American Museum of Northern California in Marysville is on that forgotten history.

“Here’s the outside in narrative,” said Bryan Tom, motioning to an exhibit he made called “Two Narratives of Chinese American History,” in which he had displayed book covers on either side.

“Here’s what you get,” he continued, pointing to the book covers. “’Ocean of Bitter Dreams,’ The Chinese Must Go,’ and ‘Entry Denied.’” But what was really going on in Chinese America?”

The other side of the display showed more hopeful photos and titles, including books he had published.

“Look at these pictures you can see - they’re going to school, they’re having baby contests, none of which is reflected in the narrative that’s shown there.”

Tom, who founded the museum in 2005, said the myths of Chinese American history began with the Gold Rush when Chinese pioneers first came to California to mine. According to Tom, 25% of miners in the industry in California in 1860 were Chinese and by 1870, it became 58%.

Chinatowns extended from Downieville all the way down to Mariposa along Highway 49. With almost all evidence destroyed or abandoned, Tom says little exists to remind people of the importance of Chinese settlers in early state history.

“With the gold miners, what happened is – the first thing you read about is that they were driven off the mines and there’s a lot of violence involved” he explained. “One thing they never take into account is that they don’t examine mining claims. What is a mining claim? That’s something that allows you to mine the land that you have a claim on.”

Tom explained that when one person was done with a mining claim, they would sell it to another person. He said many buyers of the claims could have been Chinese, but records in many cases have not been examined to know.

“Now, if they were driven out, the Chinese would never buy these claims,” Tom explained. “And it would destroy the economy of all these mining towns, so I don’t know if I follow that narrative that closely."

Tom’s ties to the Chinese coming to America during the Gold Rush era date back to his grandfather, who traveled to California in 1851. He came with his brother and they mined in the Gold Rush towns in the hills around Marysville.

“He and his brother struck it rich, so he stayed in Marysville,” Tom explained. “He opened a store at 310 1st street, half a block from this museum.”

The broader picture he paints at his museum tells the story of success among Chinese settlers, like his grandfather, whose shop in Marysville stayed in the Tom family for more than 100 years. Rather than the focus on being driven out of mines, Tom recognizes that the gold they found helped to finance a reform movement, then a revolution in China.

According to Tom, with skills gained, such as those of aviation, railroads and telecommunications, Chinese Americans helped in developing China into a modern nation.

“Later on, the Chinese had a major impact on agriculture and agriculture became one of the leading industries in California,” he explained. “Created a lot of wealth, including the fishing industry, and the

He said the Gold Rush era also led to Marysville becoming a mecca for Chinese settlers. It’s the last Chinatown of the era that still exists today. Steps away from the museum, people will see an active temple, the old Chinese school building and three Chinese associations.

“If you look at photographs carefully, you’ll see, much better than some of the written history, what the life of Chinese Americans was like in last 150 years,” Tom explained. “You’ll see pictures of people celebrating, doing all kinds of things. It wasn’t all a question of cheap labor or working on the railroad, because the railroad wasn’t all that long. I say, take a look at pictures, rather than text that may as well be biased.”

"I think they’re recognizing their own history and they’re seeing it from their own perspective which they never had a chance to really view before," Tom explained. "You have to remember, if all you’ve heard about your history is that you were poor and willing to do anything for a couple dollars, that doesn’t instill pride in you. But if you see the broader picture, then perhaps you have a better understanding of your heritage.”

WATCH NEXT: Members of the AAPI community discuss the stereotypes and assumptions they face daily