A "Straight Pride" event in Modesto has seen challenges and changes since the permit was first submitted. Here's how it started and where it's at now. 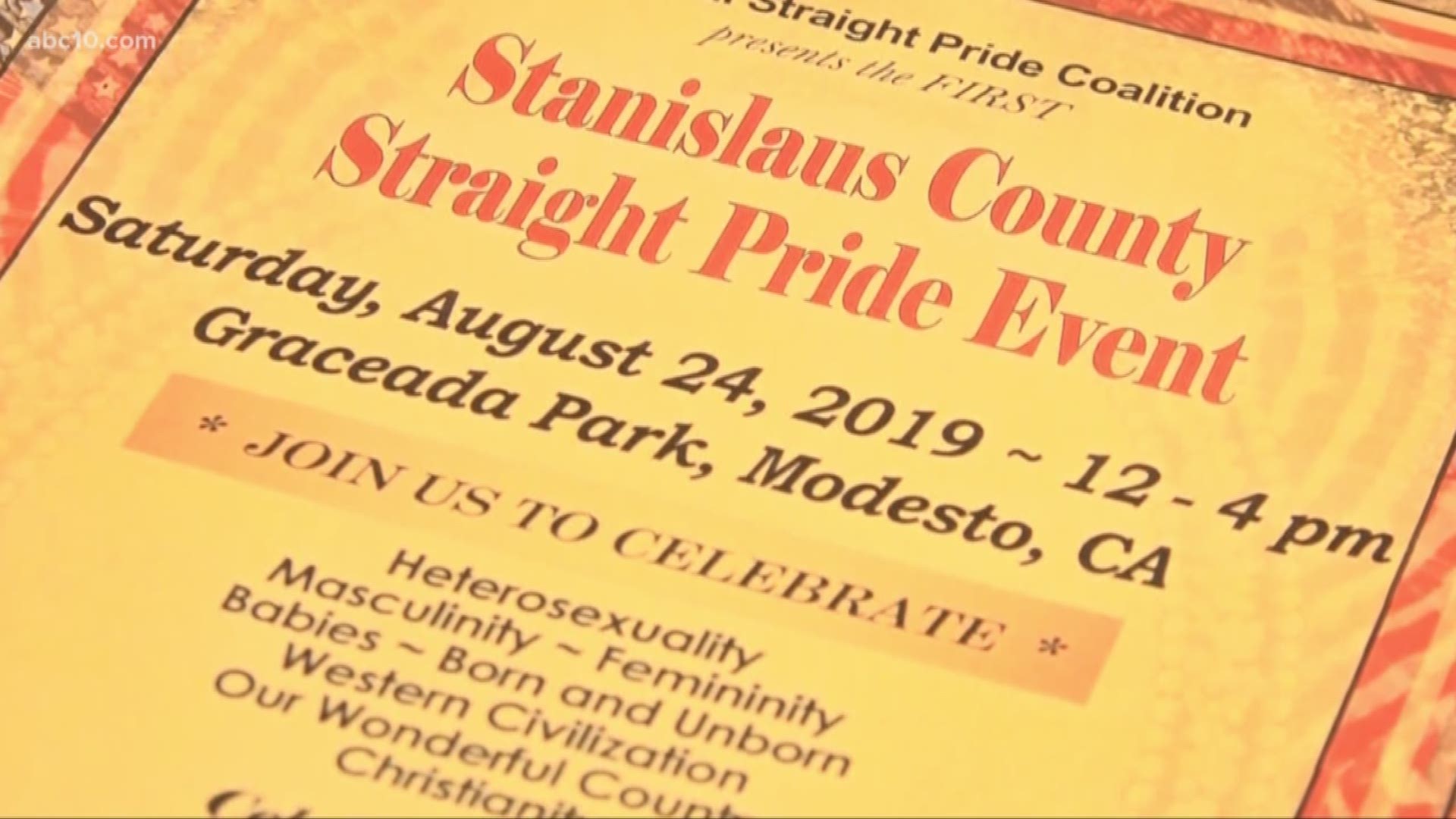 MODESTO, Calif. — *This story has been updated to reflect new information on the "Straight Pride" event planned for Modesto.

An event permit for a "Straight Pride" event in Modesto spurred public outcry and heated conversations all the way up to that permit’s denial by city staff. However, organizers are now planning to go “solo” with their efforts despite the city’s denial.

“We’ll still have an event,” said Don Grundmann, event organizer. “I don’t know how many people will show up [or] be able to show up, but, remember, this is the first. The second annual Straight Pride Coalition Parade event will occur next year and then we’re going to be working with counties throughout the state and the country.”

Now being advertised as the Stanislaus County Straight Pride Event, the event is still planned for Aug. 24.

As Modesto nears the first-time event, here’s how it got to where it is now.

“I got the idea originally from the Vice Mayor of Dixon [Ted Hickman]. He mentioned it, [but] I never read his article... but I heard about the contents,” said Grundmann in a phone interview with ABC10.

Last year, Ted Hickman, the former Vice Mayor of Dixon, penned an editorial calling for a “Straight Pride Awareness Month” where he suggested a straight pride parade in every state and county throughout the country.

While Grundmann said he never actually read the article, he originally heard about the idea from the vice mayor before adopting it himself.

Why do the organizers want the parade?

As it's been advertised on their flyer, the event is meant to celebrate heterosexuality, masculinity - femininity, babies - both born and unborn, western civilization, "our wonderful country," and Christianity.

“Well, we’re trying to provide an inspiration for the country and all the things that we’re celebrating because we believe that they’re all under cultural attack,” Grundmann said.

Grundmann believes that "basic cultural foundations" are under attack and said his organization is taking action to prevent that attack from harming children.

Why is it in Modesto?

Grundmann is a chiropractor in the Bay Area, however, he said there is a core group of people in Modesto who believe in the principles his organization is working toward.

“The idea is to take it all across the country but since the core is in Modesto right now, we decided to start there,” he added.

Mother and Son at odds over "Straight Pride" event

A son and his adoptive mother made headlines after they found themselves on opposite sides of the "Straight Pride" event.

Mylinda Mason is recognized as a co-organizer for the event. But her son Matthew Mason, a gay man, found himself directly opposed to her effort.

According to Grundmann, he put in the permit application for a "Straight Pride" parade about a couple months ago.

It caused a stir in local communities and strong emotions on both sides all the way up to the day the permit was denied by city staff on Aug. 9.

Leading up to that day, multiple people spoke out on the topic during a Modesto City Council meeting on Aug. 7. The denial was issued when city staff cited security concerns for the Graceada Park venue and a lack of liability insurance from the group, which is a requirement for holding events in most city parks and facilities.

The group intended to reapply for the plaza outside the Modesto Centre Plaza at the suggestion of the City of Modesto, however, they weren't able to secure the necessary insurance.

Grundmann said that the City of Modesto and leadership were trying to stop the event from happening, however, the city has previously told ABC10 that the permit was going through the same process as any other application.

"We've been clear from the start that the city will respect the First Amendment rights of the organizer, but we will do what it takes to ensure the safety of the residents and participants, and that includes confirming that the proper insurance is obtained," Thomas Reeves, spokesperson for the City of Modesto, told ABC10 in an Aug. 11 email.

Despite the denial, Grundmann has said the event will still happen on Aug. 24 in Modesto.

“We’re going solo because the city gave us a deadline of [Aug. 13] for insurance," said Grundmann. "We weren’t able to get a response from insurance companies in time to complete the process.”

“We’re just going to have our civic event despite the city,” he said.

Credit: ABC10
Mylinda Mason, a co-organizer of the 'Stanislaus County Straight Pride Event' holds up a flyer for her event scheduled for August 24.

Is it related to the Boston Straight Pride Parade on Aug. 31?

The Boston Straight Pride Parade is “completely different from us,” said Grundmann.

“I’ve only read about them," he added. "I haven’t even called them, but their concept is completely different from ours.”

RELATED: A group wants a 'Straight Pride' parade in Boston and the internet isn't having it

Boiling tensions over the "Straight Pride" event prompted concern with Modesto officials that protesters from outside the city could show up on both sides.

The approved ordinance banned certain items that could be weaponized at protests like glass bottles and baseball bats. According to Modesto Police Chief Galen Carroll, it was designed to cover the kinds of rallies and protests that have been seen across the country where masked people show up with weapons.

A separate resolution denouncing hatred and violence and embracing inclusion and diversity was also approved.

What's the status of the "Straight Pride" event?

Grundmann said the event is still in line with how it originated. However, there's less specificity on what the "Straight Pride" event will look like and where it will be on Aug. 24.

They hope to have those answers in the coming days.

Currently, the only thing for certain is that Grundmann expects to be holding the first Straight Pride event in Modesto on Aug. 24.

According to the City of Modesto, August 16 was the last day for the National Straight Pride Coalition to get their paperwork and insurance together for their planned event. City spokesperson Thomas Reeves told ABC10 that the city had contacted the organization about the Friday deadline, but the City never received any paperwork or insurance confirmation.

In a phone interview with ABC10, Grundmann said the organization worked toward securing the insurance but it didn't come together. However, he said the group was essentially finished working with the City of Modesto after the previous Tuesday deadline and will hold the event on their own without a city facility.

Grundmann told ABC10 that he is tentatively planning on having a speaker series for the event along with a "parade".

He plans on releasing all the details for the Straight Pride event on August 24th through the group's website and Facebook page.

WATCH MORE: Mother vs Son in battle over controversial anti-gay event in Modesto