"It was so fast, I couldn't even put my hands up," Samantha Clarke recalled. "I had no idea she was going to hit me, like, didn't see it coming." 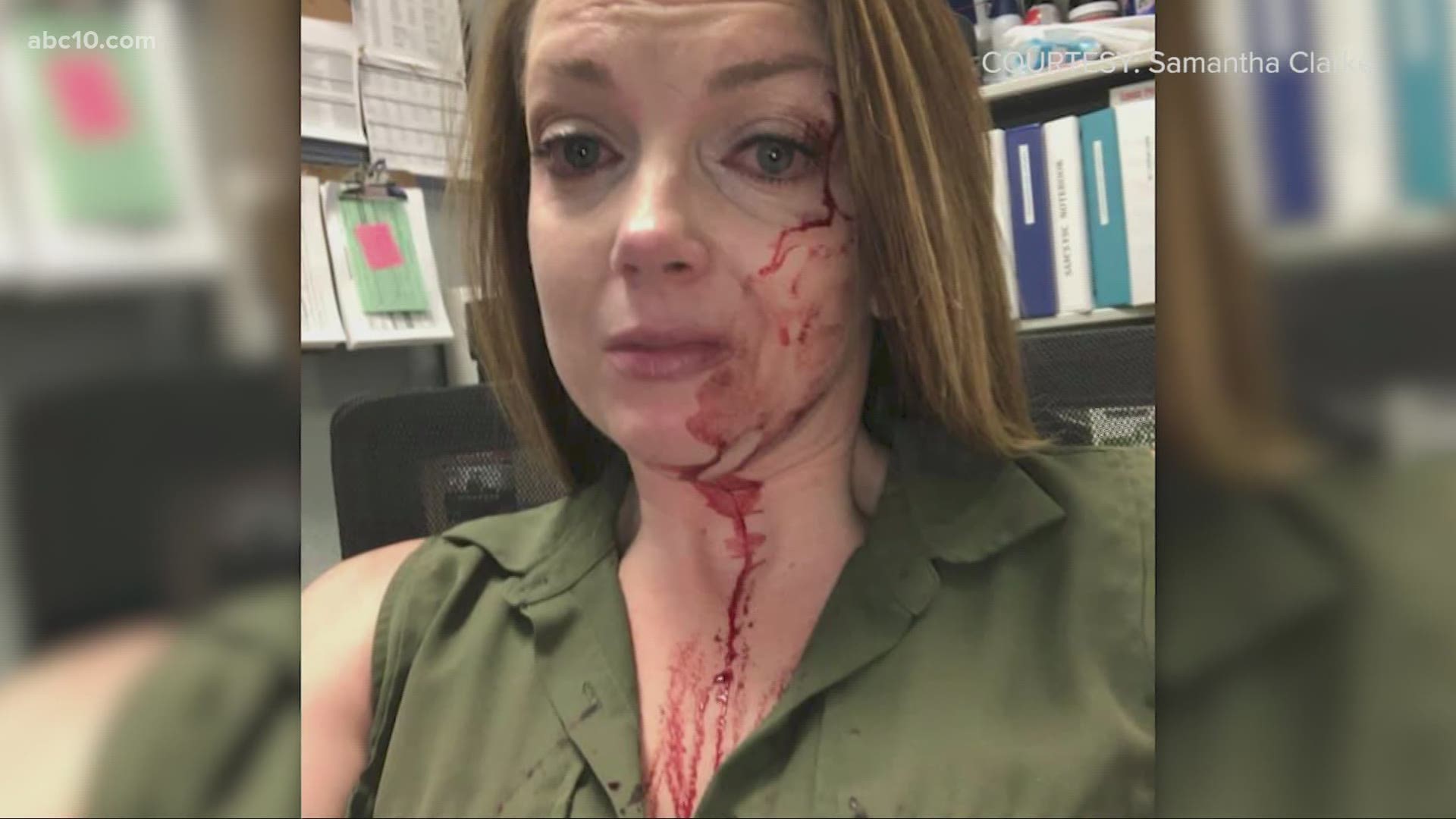 MODESTO, Calif. — Samantha Clarke said she was "split open pretty good" two weeks ago when she was allegedly assaulted by a customer while police say she was working at a Big 5 Sporting Goods store.

Clarke said she has been working at the sporting goods store for 17 years now. Earlier this month, in the middle of the pandemic, she says a woman calling from Tracy asked her staff to hold a swimming pool for her.

"We told them that we would hold it for 30 minutes, they showed up 45 minutes later and the pool was gone," Clarke recalled. "So the lady was upset, understandably. I could understand that she was upset."

Clarke says the woman started throwing items off the counter, hit her in the face with something metal in her hand and casually walked out of the store with her baby's stroller in tote.

She said the woman even took the time to cover up her license plates on the way out.

"It was so fast, I couldn't even put my hands up," Clarke recalled. "I had no idea she was going to hit me, like, didn't see it coming."

While it's the first time she's been physically attacked, Clarke says disrespect has been an ongoing problem after they began implementing rules in the store like social distancing, requiring masks and limiting the number of people allowed inside.

"Never in a million years thought that I was going to be hit in the face for doing my job," she said.

This week, the Modesto Police Department posted a picture of the alleged assaulter on its Facebook page. The photo shows a woman standing in the parking lot wearing a black mask with a Chanel logo.

"I just don't understand when people come and they kind of take their frustrations out on us like we're the ones making these decisions, and we're just following the instructions from our employer," Clarke said.

Since the attack, Clarke created a Facebook page called "Retail life during Covid-19" to help gain awareness of the struggles of retail workers working during the pandemic.

As of Thursday night, the page already has more than 28,000 followers.

"You just have those people who want to cuss you out, or we can't make returns right now," Clarke said. "I had one lady threaten to burn our store down because we couldn't take back a return."

Clarke said she has a message for all shoppers as they return to any store during these times.

"I just want to say to be patient and show a little kindness to your retail worker, cashier," Clarke said. "A nice thank you goes a long way."

If you have any information about the suspect, you are asked to call Crime Stoppers at 209-521-4636. You can remain anonymous and may be eligible for a cash reward.