In the video, Jesse Montelongo can be seen using an underhand toss to throw what looks like a book toward Officer Dave Wallace who has his gun drawn. 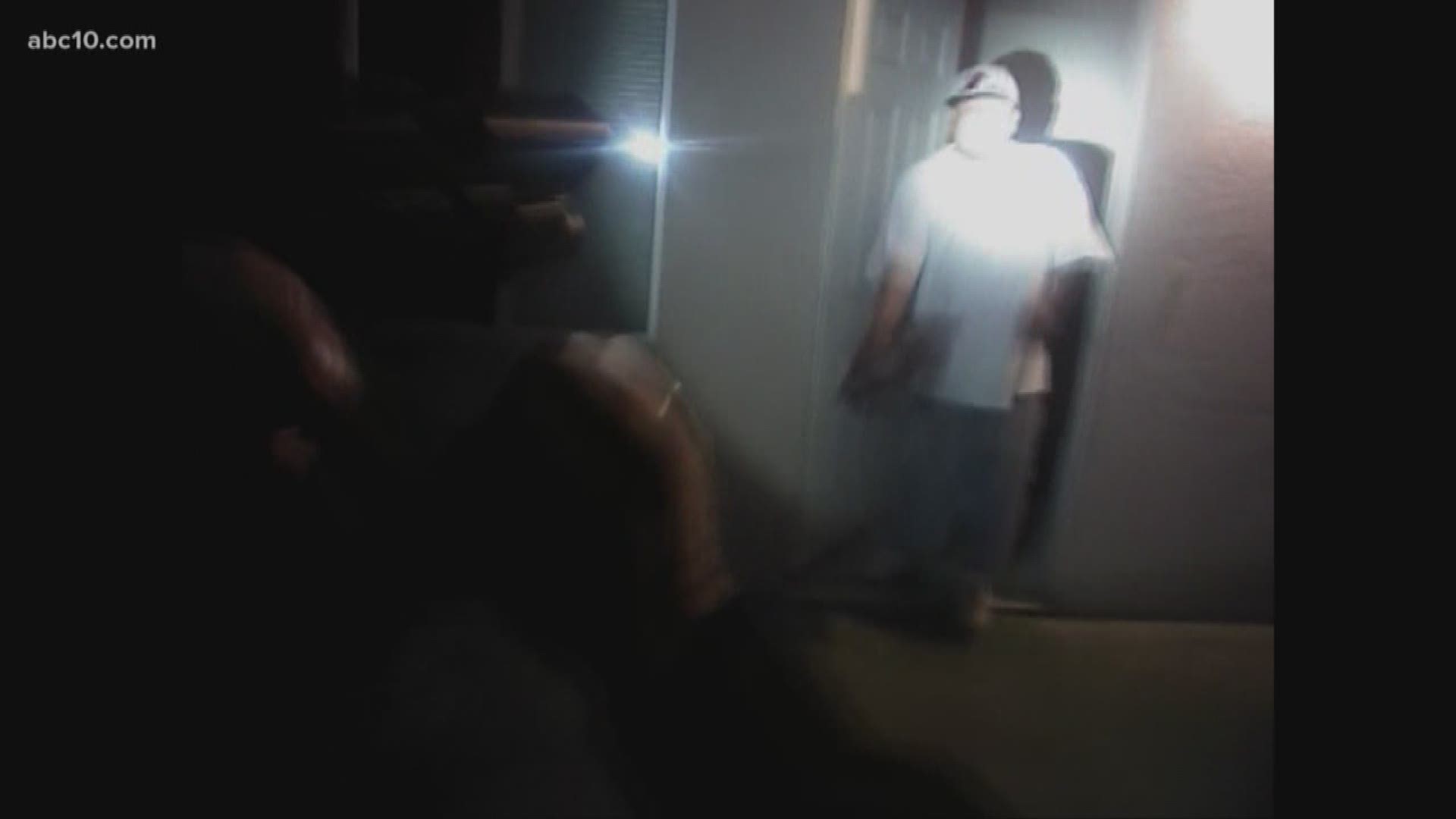 MODESTO, Calif. — The Modesto Police Department released body camera footage from a 2014 shooting that shows an officer responding to a domestic dispute fire one shot at a man who threw something at the officer.

The newly-released video is at the center of a heated legal battle between Jesse Montelongo, who was shot during the interaction, and the City of Modesto.

"It took us a while to get this video and reveal to the public because the defendants didn’t want it to be seen by the public," said Montelongo's attorney DeWitt Marcellus Lacy. "As a matter of fact they had marked this confidential and attorneys only we believe inappropriately."

Video of the shooting shows Montelongo, 35, standing in the doorway of his home on Oct. 17, 2014. In it, Montelongo can be seen using an underhand toss to throw what looks like a book toward Officer Dave Wallace who has his gun drawn.

The body camera shows Wallace, dodge the item by moving left. Then, as Montelongo retreats into his home and begins to close the door, Wallace turns back toward him, and fires one shot.

"Shots fired — he threw something at me. He wouldn't show me his hands. Threw his object at me," Wallace is heard saying in the video.

Montelongo was hit once in his lower abdomen. Now, his legal team wants justice for a shooting that they say was excessive force against an unarmed man.

"Jesse was shot even though he was unarmed and clearly did not pose an immediate threat to the officer," Lacy said.

Modesto Police officials dispute that, arguing that Wallace's use of force was justified because Montelongo refused commands to show his hands and "suddenly lunged" at Wallace.

New California law, which went into effect at the start of the year, defines when police can use lethal force. Assembly Bill 392 allows police to use lethal force only when necessary to defend against an imminent threat of death or serious injury to officers or bystanders.

Because the shooting happened in 2014, it's unclear whether Montelongo's action of throwing a book would have been considered enough to justify the law's threshold for use of force.

Montelongo's attorney's said he was left with lifelong medical problems and has gone through several surgeries to alleviate the damage to his internal organs.

In all, the bodycam footage showing Montelongo throw the book and the officer shoot him, lasts under five seconds. All the while, Montelongo's family members — including his five children — were inside the house.

"One has to think and remember there were small children right behind this front door where officer Wallace shot into," Lacy said. "And it was a traumatizing event."

The federal lawsuit filed in 2015 accuses Wallace and the City of Modesto of excessive force, violating Montelongo’s rights and intentional infliction of emotional distress.

For more than five years, the police department refused to release the body camera footage, saying that it was part of an open investigation. The city held onto this argument even after Officer Wallace retired from the department in 2018.

Meanwhile, the family has filed a federal lawsuit against the officer and the City of Modesto for excessive force, violating Montelongo’s civil rights, and intentional infliction of emotional distress.

"I can only believe it was because they had a vested interest in keeping this video private," Lacy said. "They have tried everything they could to stall and prevent the disclosure of the video to plaintiffs and to the public, including attempting to unnecessarily mark this video as confidential, pursuant to a protective order."

Lacy went on to say that records indicate that Officer Wallace had previously been shot at twice in the line of duty before he shot Montelongo.

“Modesto Police really needs to make a better consideration of officers’ readiness to return to duty,” Lacy said. “Had the officer received the psychological help he may have needed following the earlier incidents, Jesse Montelongo might not have been shot, and his family not traumatized by their experience with a law enforcement officer who concluded that a yearbook presented a deadly threat."