Multiple groups are mobilizing in Modesto for a "Straight Pride" event on Saturday. Tentative plans for the event include a speaker series and a "parade". 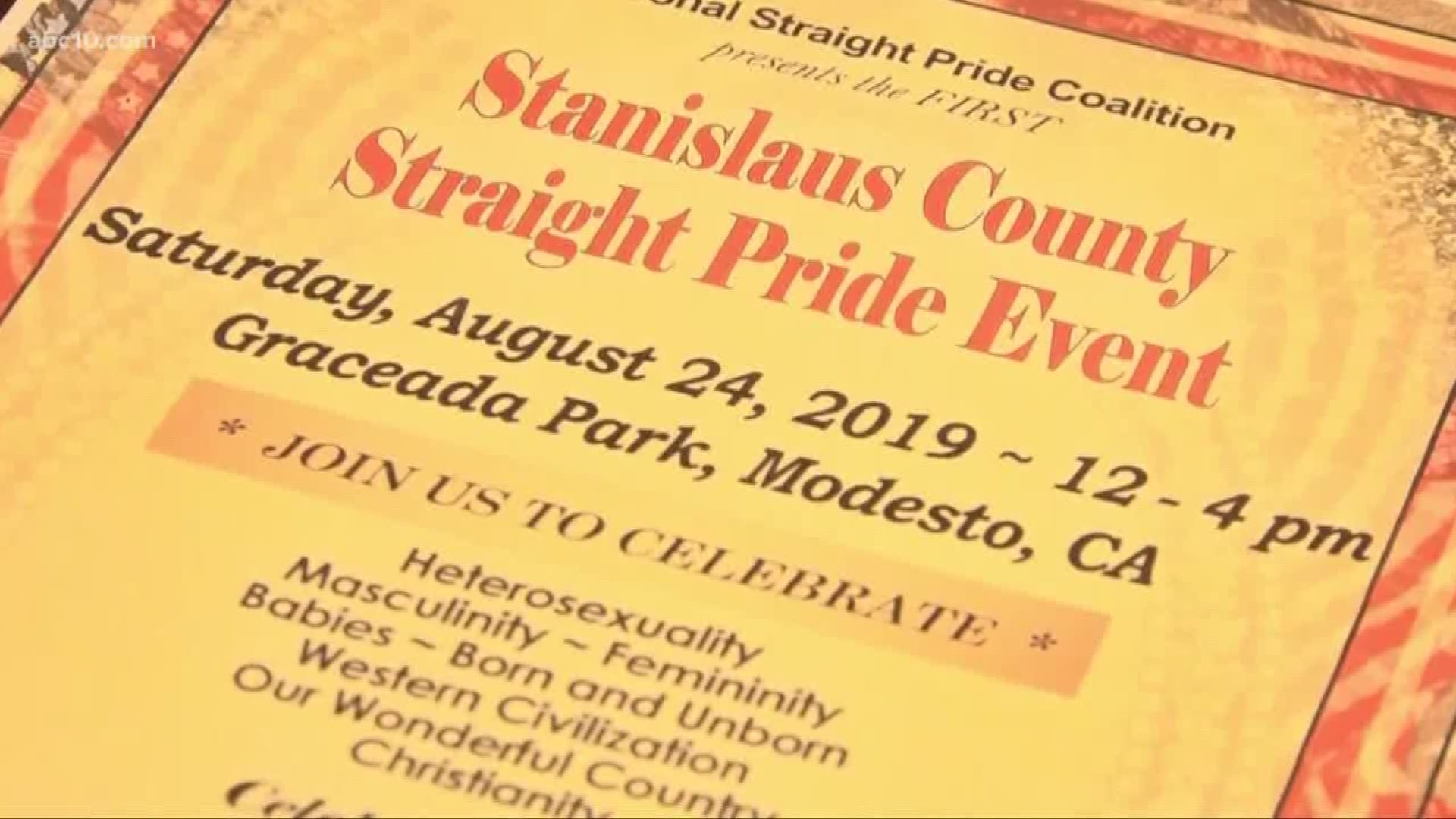 MODESTO, Calif. — Update: According to the organizer the event will take place at the Planned Parenthood located on 1431 McHenry Avenue in Modesto. There are no additional details at this time.

The location of the event was disclosed to ABC10 around 11:20 a.m. Saturday. The National Straight Pride Coalition's website was updated around the same time, and had the following reason for keeping the location a secret for so long:

"In working to have the 1st Straight Pride Event in the history of our nation our opponents have openly promoted violence against us and are actively recruiting criminal elements to physically attack us."

The site goes on to apologize to supporters wishing to attend, recognizing that announcing so late is an "inconvenience."

A speaker series and “parade” were tentatively announced for what organizers say will be the first "Straight Pride" event in the country. While the National Straight Pride Coalition mobilizes for their Modesto event, there are also protesters mobilizing for their own efforts heading into the weekend.

Initially, the National Straight Pride Coalition hit a roadblock after their liability insurance was canceled and security concerns translated to a permit denial by the City of Modesto. Despite the denial, they continued their efforts to have a Straight Pride event in the city even if it was without a city facility.

Protesters against the event have also declared their intent to mobilize once the event’s location and time are revealed.

When and where is the Straight Pride event?

Currently, the only announced time for the "Straight Pride" event is Aug. 24 in Modesto.

Original plans had the event slated for Graceada Park, but lack of liability insurance and security concerns resulted in a permit denial. An alternate location was suggested for the plaza at Modesto Centre Plaza but insurance issues continued.

Organizer Don Grundmann has told ABC10 that all the details for the event will be released on Aug. 24 on NationalStraightPrideCoalition.org and their California Straight Pride Coalition Facebook page.

RELATED: Everything we know so far about the 'Straight Pride' event in Modesto

How protesters are organizing

"Pride, Solidarity and Multiculturalism," or PRISM, is a protest effort against the "Straight Pride" event. They said they’ll be heading to the event wherever it ends up happening.

They told ABC10 that they have around 300 people for the protest and expect to meet on Aug. 24 at 11 a.m. in Enslen Park to start mobilizing.

RELATED: How Modesto is preparing for a possible 'Straight Pride' event

How Modesto police are preparing

According to the Modesto Police Department, they’ll be bringing in extra officers and sending out their mobile field force team to help with crowd control.

Agencies from outside Modesto are also on standby in case things get out of control.

"We always plan for the worst and hope for the best. Our ultimate goal is just to keep the peace and keep our community safe, and so we plan for every possible contingency that we can think of," Modesto Police Sgt. Kalani Souza told ABC10.

What will happen at the Straight Pride event?

Initially, the event was billed as a "Straight Pride Parade," however, as time went on, it was also recognized as a picnic, a rally, and as an “event.”

Grundmann told ABC10 that they're planning to host a speaker series and what he referred to as a "parade" for the "Straight Pride" event.

The speaker series is expected to have two sessions. The first speaker session in the morning will be followed by the "parade" and, afterward, the group will return for the final speakers.

No head count has been given for the event.

WATCH ALSO: 'This event will go on' | Modesto 'Straight Pride' organizers plan to continue with event