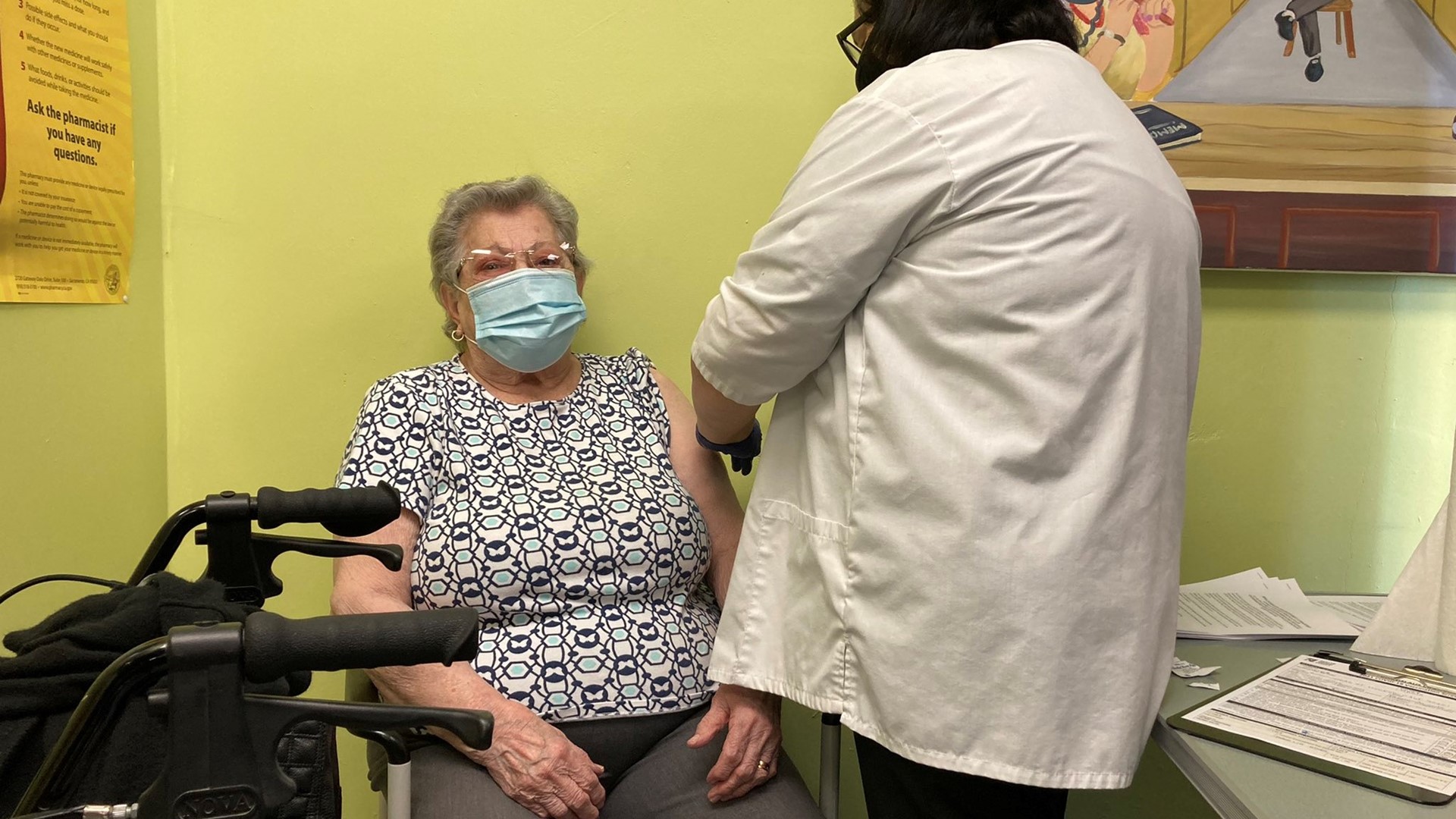 MODESTO, Calif. — Latinos make up almost 39% of the state of California's population but have more than half of the coronavirus cases in the state, and nearly half of the deaths. Still, a recent Brookings Institution poll found nearly 30% of Latinos don't plan to get vaccinated.

That's why a Modesto city councilman is helping speed up the process in making two locally-owned pharmacies vaccination distribution sites in Stanislaus County, in hopes of targeting the Latino population.

For the first time since before the pandemic, Fernanda Mota is breathing a sigh of relief.

"It's very nice to have her vaccinated! She's 90!" Fernanda Mota, the daughter of a woman being vaccinated at Familia Farmacia said.

Her 90-year-old mother got the Moderna coronavirus vaccine, in the comfort of their locally-owned pharmacy, rather than the alternative of waiting up to three hours in line outdoors in places like the Modesto Centre Plaza.

"But like my mother, she has problems with arthritis, she can catch a cold and be sicker and to be in line for two to three hours to go in, it's hard," Mota said. "This way, I think, is one of the best things they did."

Awesome news! A Modesto city councilman was able to help speed up the process in making Familia Farmacia (a primarily Spanish speaking pharmacy) a coronavirus vaccine distribution site, which started this week. Their goal is to help more Latinos get vaccinated faster. @ABC10 pic.twitter.com/Ma11cpV6dV

The owner of Familia Farmacia, a primarily Spanish speaking pharmacy, registered with the state under the CalVax system as a vaccine distribution site as soon as he could.

"It's real, people do want to be helped," Miguel Oseguera, the owner of Familia Farmacia said.

But after waiting and still not hearing anything, he reached out to Modesto City Councilman Tony Madrigal for help.

"People trust their local pharmacists, they have that relationship with them, they're on a first-name basis," Madrigal said.

Madrigal sent a letter to the county CEO urging approval for this pharmacy, along with Roger's Drug Store in West Modesto to become designated vaccination sites, given the high incidence of coronavirus among the Latino population in Stanislaus County.

After finally getting the vaccines on Monday, Familia Farmacia has given out about 100 vaccinations to the 65 and up crowd, primarily Latino.

"When our community finds out, we're Latino, we're serving the Hispanic community, it's one of them, they'll open up a lot faster, the word spreads like wildfire," Oseguera said.

And while you might be placed on a waiting list because of a limited supply right now, all you have to do is call to make an appointment.

"Just hope we can get 500, 600, whatever vaccines we are allocated by the county, we're just going to be pumping them out as fast as we can," he said.

WATCH NEXT: When you will be able to get a COVID-19 vaccine in California