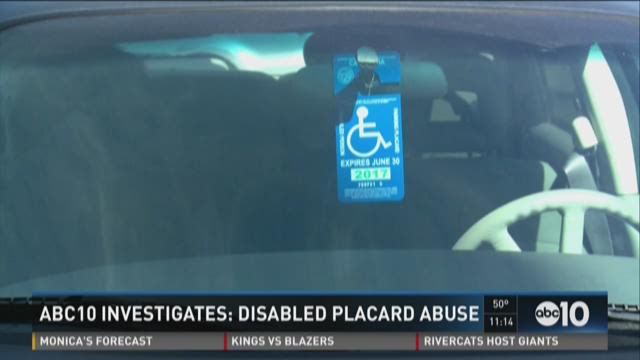 Placard holders can park in the specially-painted spots in front at stores and businesses and for free at spots with parking meters. Investigators catch hundreds of people misusing the disabled parking permits every year, but they know abuse of the system could involve tens-of-thousands of drivers.

The first visibly able-bodied placard holder Thom saw was Julie Silver, a cashier from Willows. Silver said that after 40 years of working on her feet, on hard surfaces, her knees give out from time to time - making it difficult to get around.

Julie Silver, from Willows, parks her truck in a disabled parking spot in Old Sacramento

Silver said knee surgery was out of the question, so her doctor signed the papers allowing her to get a placard that she can use for the rest of her life.

"It's just easy for me to do the handicapped," Silver said. "I do it, because I can."

Silver added that the placard was "very easy" to get.

Downloadable applications are on the DMV website. Fill it out and get a doctor to sign off that you medically need better parking access, and a disabled placard is as good as yours.

Fewer than 100 yards away, a man parked in the same spot during the first three days of the ABC10 investigation. He too seemed to have a normal gait, but a Department of Motor Vehicles Investigator told ABC10 you can never assume placard abuse simply because a driver looks healthy.

The man who parked in front of the same business three days in a row said he was hit by a truck four years ago. He wouldn't give his name, but he said, "Some days I can walk, and some days I can't."

One out of every 8.8 licensed California drivers has a disabled placard allowin them to park almost anywhere for free

The numbers in California make you wonder if a lot of people are gaming the system. The average number of California placards, and disabled license plates, on the road over the past three years is 2.5 million. There are 22 million licensed drivers in the state. That's one placard for every 8.8 drivers.

Assemblyman Mike Gatto, a Democrat from Los Angeles, says his research shows when expired placards and temporary placards are figured into the equation the number of disabled permits is actually 3 million - meaning closer to one in seven drivers has the free parking option.

"When these people, who are committing fraud on the system take up a disabled spot, they're taking that spot away from a wounded veteran, someone who is elderly or someone who is disabled and genuinely needs it," Gatto said

Gatto has proposed legislation that would force people to turn in expired placards after family members who have them pass away. It would also allow local agencies to start charging everyone for metered parking, including disabled placard holders. Gatto said after a similar law passed in Michigan placard demand decreased by 90 percent.

Some of the worst abuse could be outside the Capitol and around public agency buildings throughout the city.

31 of 39 vehicles parked on two blocks around the State Treasure&#39;s building and the State Appellate Courthouse had disabled parking placards or disabled license plates

Of 39 cars and trucks recently parked around the state appellate courthouse sand the state treasurer building, 31 had disabled placards - meaning better than three-quarters of all vehicles

On one side of I Street outside the Sacramento County Courthouse eight of 11 vehicles had placards.

15 out of 21 cars parked on both sides of H Street, next to the Sacramento County Courthouse, had disabled placards.

Last year DMV investigators wrote 577 misdemeanor citations for placard abuse. They also charged some drivers with fraud after they discovered forged doctor signatures on applications. The rest of the misdemeanor tickets involved mostly for counterfeiting placards and using someone else's placard.

The state does not investigate doctors who may be approving placards for people who don't really need them.

Just ask that woman, who said her knees are bad after four decades of working as a cashier, how much placard abuse there is. "Yeah, a lot," said Julie Silver as she walked away down a dirt path in Old Town.