Authorities have reported seven more fatalities from the Camp Fire, bringing the total number of fatalities so far to 63 in the deadliest wildfire in state history. 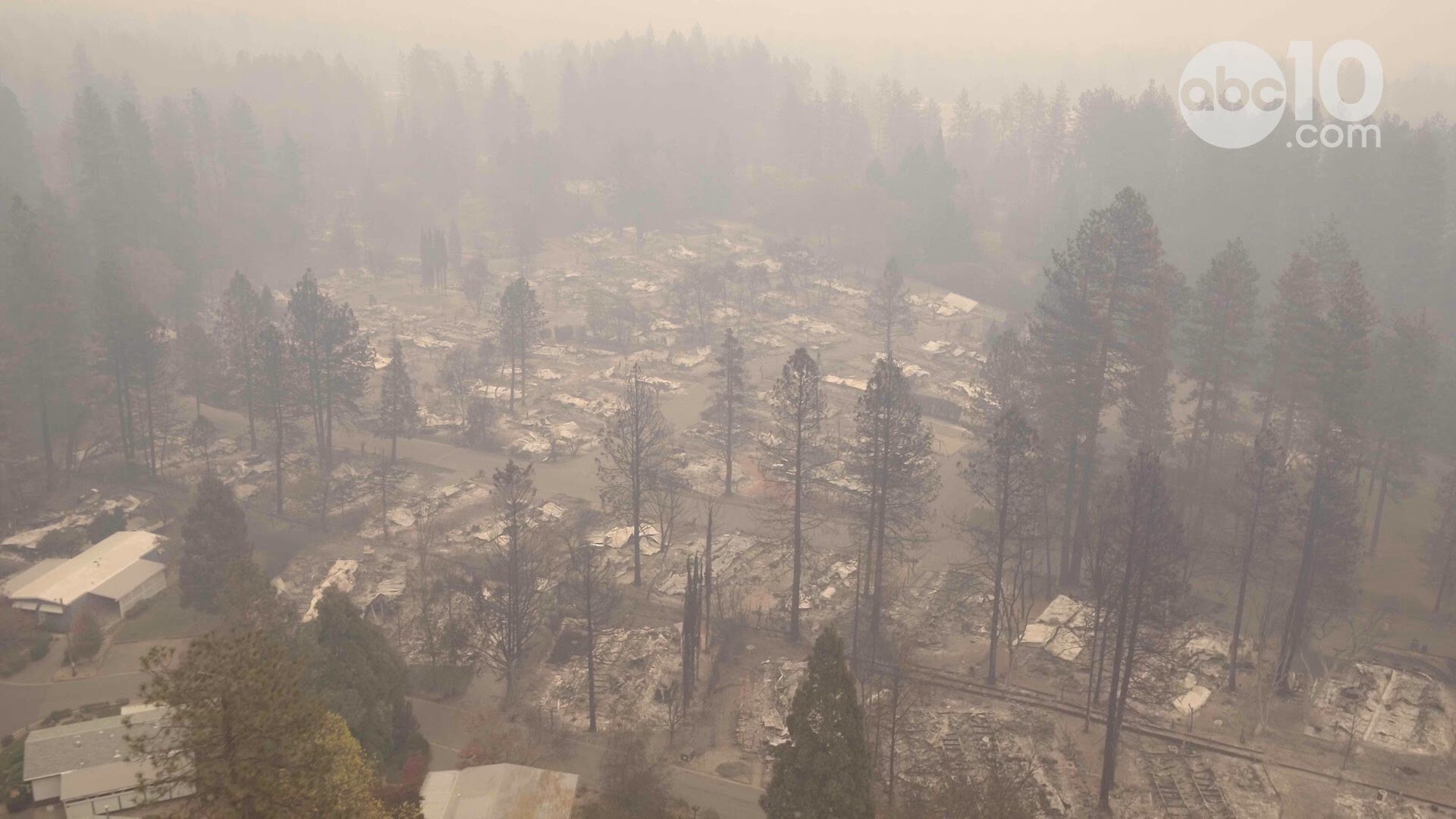 At least 63 are now dead from a Northern California wildfire, and officials say they have a missing persons list with 631 names on it in an ever-evolving accounting of the missing after the nation's deadliest wildfire in a century.

The high number of missing people probably includes some who fled the blaze and didn't realize they had been reported missing, Butte County Sheriff Kory Honea said. He added that he was making the list public so people could see if they were on it and let authorities know they were safe.

"The chaos that we were dealing with was extraordinary," Honea said of the early crisis hours last week. "Now we're trying to go back out and make sure that we're accounting for everyone."

Some 52,000 people were displaced to shelters, the homes of friends and relatives, to motels — and to a Walmart parking lot and an adjacent field in Chico, a dozen miles away from the ashes.

At vast shelter parking lot, evacuees from California's deadliest fire wonder if they still have homes, if their neighbors are still alive — and where they will go when their place of refuge shuts down in a matter of days.

"It's cold and scary," said Lilly Batres, 13, one of the few children there, who fled with her family from the forested town of Magalia and didn't know whether her home survived. "I feel like people are going to come into our tent."

The Northern California fire that began a week earlier obliterated the town of Paradise and caused such carnage that searchers continued to pull bodies out of incinerated homes and cremated cars. The toll had reached 63 dead and 9,800 homes destroyed.

The fire was 40 percent contained, but there was no timeline for allowing evacuees to return because of the danger. Power lines are still down, roads closed, and firefighters are still dousing embers, authorities said.

Authorities say that 631 people are still unaccounted for after last week's deadly wildfire in Northern California.

Butte County Sheriff Kory Honea said he believes there are people on the list who fled the blaze and don't realize they were reported missing. He said authorities were making the list public so people could see if they're on it, and let authorities know they are safe.

Honea announced the increased count at a news conference Thursday, after having said a day earlier that 130 people were unaccounted for.

He said the first figure was a partial count, and after authorities went back through all 911 calls and other reports of missing persons from the past week they came up with the new number.

Authorities have reported seven more fatalities from the Camp Fire, bringing the total number of fatalities so far to 63 in the deadliest wildfire in state history.

The announcement came Thursday as authorities continued to search the devastated town of Paradise for human remains.

More than 5,000 fire personnel were battling the blaze that started a week ago and has displaced 52,000 people.

Authorities also raised the number of homes destroyed by the wildfire to 9,700.

An informal camp for wildfire refugees in a Walmart parking lot in Northern California is going to be closing.

Volunteers who helped bring in free food and clothing said Thursday they are phasing out amenities.

More than 75 tents have popped up at the Chico store to house people evacuated from the fire that destroyed the town of Paradise and the surrounding area.

Volunteers say they want people to go to shelters, so clothing, food and toilets will be removed by Sunday.

Betsy Totten, a Chico city spokeswoman, said it's unclear what will be done if people don't leave, but officials don't plan to kick them out.

The site has been popular with evacuees who can't find a hotel and can't stay at shelters because they have pets.

Most schools in San Francisco, Sacramento, Oakland and Folsom will be closed Friday as a deadly wildfire in Northern California send smoke into the Bay Area.

School districts announced the closures Thursday as the region experienced some of the worst air quality since the fire started a week ago about 180 miles (290 kilometers) north of San Francisco.

An Environmental Protection Agency website says the air quality in Sacramento is "hazardous" Thursday and San Francisco's is "very unhealthy." Many people walking around the cities wore face masks.

The wildfire that started a week ago has killed dozens of people and charred nearly 220 square miles (570 square kilometers).

A utility facing severe financial pressure amid speculation that its equipment may have sparked a deadly California wildfire asked U.S. energy regulators last month for permission to raise its customers' monthly bills.

Pacific Gas & Electric Co. told the Federal Energy Regulatory Commission in October that it wants the increase to harden its system against wildfires and deliver a sizable increase in profits to shareholders.

The company says it faces a higher wildfire risk than other utilities and would have trouble attracting investors without a higher profit.

The San Francisco-based utility made the request a month before the Camp Fire broke out Nov. 8 in Northern California and became the nation's deadliest wildfire in 100 years.

No cause has been determined, but PG&E reported an outage around when and where the fire ignited.

President Donald Trump will travel to California on Saturday to meet with victims of the deadly wildfires that have scorched the state.

The White House announced Thursday that it is still arranging details of his trip to California, but that visit people who have been impacted by the fires.

The fires in Northern and Southern California started last week and prompted the evacuation of hundreds of thousands of people and the destruction of thousands of homes.

President Trump will be visiting Northern California, but additional details are unavailable at this time.

It was one week ago today the Camp Fire — the deadliest wildfire in California history — roared through the town of Paradise and the surrounding Butte County region, leaving behind only heartbreak.

And it’s not over.

Fifty-six people, mostly from Paradise, died in the furious blaze with casualty number only expected to grow in the days ahead as recovery teams continue to search the charred rubble and debris for bodies.

There are still 130 people missing.

California Department of Forestry and Fire Protection officials said the fire, which grew Thursday to 140,000 acres from 138,000 acres and is 40 percent contained, continues to threaten 15,500 buildings.

With more than 5,600 firefighters battling the blaze, they expect to have it fully contained by Nov. 30.

The Camp Fire forced the evacuation of 52,000 people with an estimated 1,385 still staying in shelters.

MORE: What the Camp Fire looks like from space

Numerous air tankers from throughout the state are also flying fire-suppression missions over the blaze as weather and smoke conditions allow.

With still a lot of work to do before the fire is contained, firefighters said the fire remained active Wednesday night crews using various suppression tactics to attack it.

Firefighters were able to conduct back-firing operations and assisting with securing the fire perimeter.

Firefighters will also work to strengthen and improve containment lines, as well as patrol the interior of the fire to put out hot spots that still exist, they said.

Shasta County residents are being warned Thursday to take precautions to protect their health due to unhealthy air conditions created by the Camp Fire in Butte County.

Residents, especially those with respiratory problems and heart disease, the elderly, children and pregnant women, should reduce or avoid strenuous outdoor activities.

Meanwhile, the Tehama County Air Pollution Control District has issued a similar warning for that area due to unhealthy air quality there.

The Lytton Rancheria Tribe, which owns and operates the San Pablo Lytton Casino in the San Francisco Bay area, is donating $1 million to the victims of the Camp Fire through a Tri Counties Bank Camp Fire fund.

“I am grateful and moved by the generosity of the Lytton Band of Pomo Indians,” Butte County Supervisor and Paradise resident Doug Teeter said in a news release. “While people have lost their homes and possessions and are now sleeping in parking lots and shelters, kindness like this helps lift the spirits of our citizens and provides immediate relief."

The Camp Fire Fund 2018 was established by Tri Counties Bank earlier this week to benefit victims of the Camp Fire.

All funds collected will be distributed to those in need through local non-profit emergency relief agencies directly serving fire victims with immediate needs, the news release said.

Over the last several years, the tribe and casino contributed more than $18.5 million to underserved communities throughout the nation, it added.