Planning to hire a moving company? Make sure you do your research

Bruce and Karen Huck were packing up for their move from Pacifica, California, to Oregon, when they got an unwelcome message: Their moving company wanted to pick up their furniture a day late. 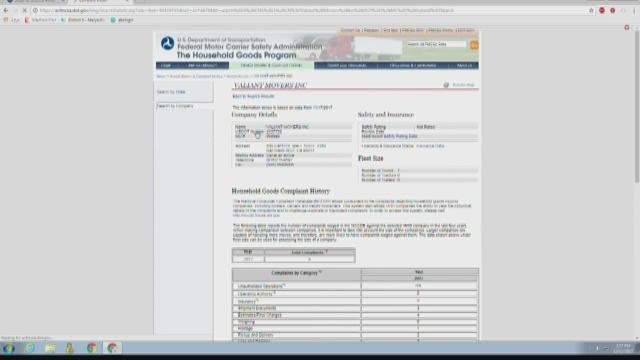 Bruce and Karen Huck were packing up for their move from Pacifica, California, to Oregon, when they got an unwelcome message: Their moving company wanted to pick up their furniture a day late.

The problem? The Hucks had to be out of their home on the agreed-upon date.

It’s a distressing situation far too many people have found themselves in – frustrated by moving companies, and working on a tight timeline. The couple contacted ABC10 News for help understanding their rights as consumers.

Text messages shown to ABC10 News indicate that the company, Sacramento-based Valiant Movers, Inc. offered to refund the Hucks’ $95 deposit if they weren't’t able to switch pickup dates. The couple said that switching dates wouldn't’t work for them.

In the text messages, a Valiant Movers’ representative said the signed moving-estimate document was not a binding contract, and the pickup date and time was not final. Valiant Movers did not respond to ABC10’s request for an interview.

ABC10 News contacted the Federal Motor Carrier Safety Administration – the government agency overseeing moving companies. The agency’s document detailing the rights and responsibilities of consumers using professional movers shows that if there’s a change to agreed-upon dates for pickup or delivery after the estimate, or order for service, has been signed, then the mover “must prepare a written change to the order for service.” But an agency spokesperson agreed with the company that the order for service was not a binding contract.

However, the agency spokesperson said the Hucks should look into filing a complaint with the Federal Motor Carrier Safety Administration, given their disappointment with Valiant Movers’ service. The agency doesn't’t resolve disputes between consumers and moving companies, but filing a complaint with the agency may help if a consumer chooses to take the issue to small-claims court.

The agency says large moving companies, with many trucks, will likely have more complaints filed, as a result of handling numerous moves in any given year. Valiant Movers has one truck.

In addition to searching for complaints filed with the Federal Motor Carrier Safety Administration, the agency advises consumers to look up reviews through the Better Business Bureau, and follow the recommended checklist available on the agency’s site.

In the end, the Hucks did not agree to the changed pickup date with Valiant. They were able to find another moving company last-minute; Monday afternoon, the movers arrived to pick up their furniture.