Petition formed for Pride month, flag to be recognized in Roseville

A proclamation is on its way to being issued at the next city council meeting, but the question of flying the Rainbow Flag is still up in the air. 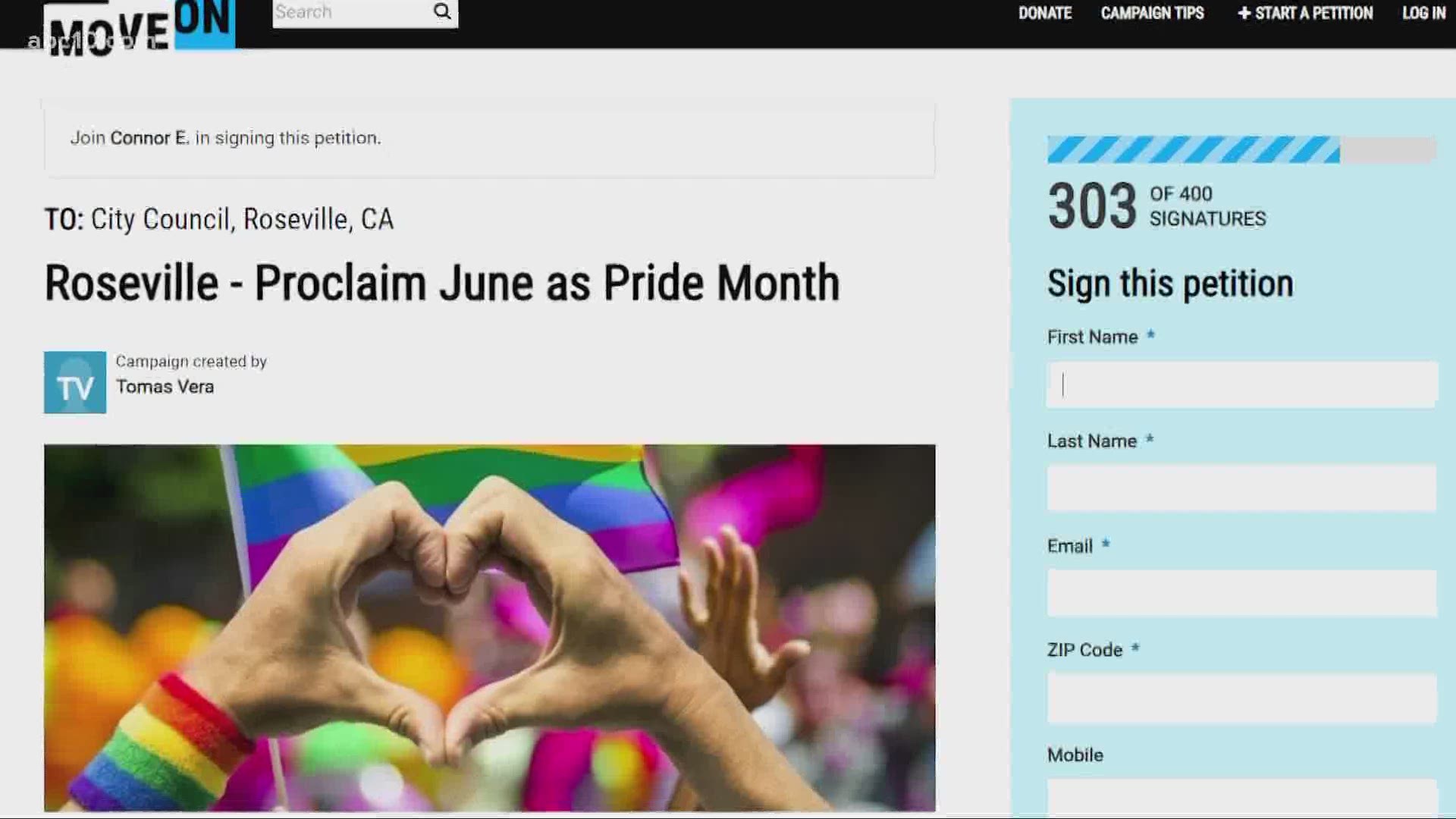 ROSEVILLE, Calif. — A push to get Pride Month recognized in Roseville has garnered support from hundreds and is on its way to being officially proclaimed.

But along with the push for a Pride Month proclamation, is also a call to get the Rainbow Flag flown at the Roseville City Hall and Civic Center.

Ellen Debach-Reilly put forth the request for the Pride Month Proclamation. She says she likes her home in Roseville, but as a member of the LGBTQ+ community, has not always had a positive experience since moving there in 1998. It's a feeling she says others in the LGBTQ+ community members share.

“I came here because Roseville has such a fabulous reputation of being safe and clean and a great place to raise your kids. And I didn't realize how conservative it was until proposition eight came around.” Debach-Reilly said, “As my kids were going through school, they had bullying issues and it was not even because they were gay. It was because they had same-sex parents.”

It’s for that reason and for the youth in the LGBTQ+ community that she says she requested the proclamation.

A friend of Debach-Reilly’s helped her put together an online petition to get support from others to encourage the Roseville City Council to move forward with the proclamation and flying the Rainbow Flag. So far, the petition has more than 300 of the required 400 signatures.

Debach-Reilly and others spoke out at the May 5 Roseville City Council meeting, urging the council to issue the proclamation. While there was some support, there was a comment against the Rainbow Flag flying outside the building.

“Show some backbone,” one man who called into the meeting’s public comment said. “The United states flag flies on that flag [pole] and nobody else's flag. I don't care if people want a MAGA flag up there and Cheeto Jesus, Donald Trump, himself comes down and asked for it to be flown. There's one flag on there and that's Old Glory.”

Roseville Mayor Krista Bernasconi said via email that the Roseville City Council does plan to issue a proclamation for Pride Month since it aligns with the city’s proclamation policy. As for flying the Pride Flag at the city building, Bernasconi says that the city does not have a flag policy and without one they will continue to fly both the California and National flags.

Debach-Reilly says she does understand the city council be asked to fly flags for other groups if they fly the Rainbow Flag, but points out Rainbow Flags have been flown in other jurisdictions around the world and at the California State Capitol.

“I think that the council members feel like they are serving those citizens as well as, as serving us and that the federal and state flag should cover everybody,” Debach-Reilly said, “But the truth is, if that were true, then we wouldn't be a protected class of citizens. There's still a need to show support for those of us who don't feel protected.”

Bernasconi pointed out that at the May 5 City Council meeting, council staff was directed to do research and come back with potential flag policies that the council could consider.

Debach-Reilly says she and other supporters will continue pushing for the proclamation to be issued and the flag to be flown.

They plan to rally outside city council chambers for the next meeting on May 19.

Dealing with travel anxiety due to the pandemic | Connect the Dots