Jennifer Ingraham-Gonsalves photographed a moving moment as her husband Robert, a black man, embraced their son in response to recent protests. 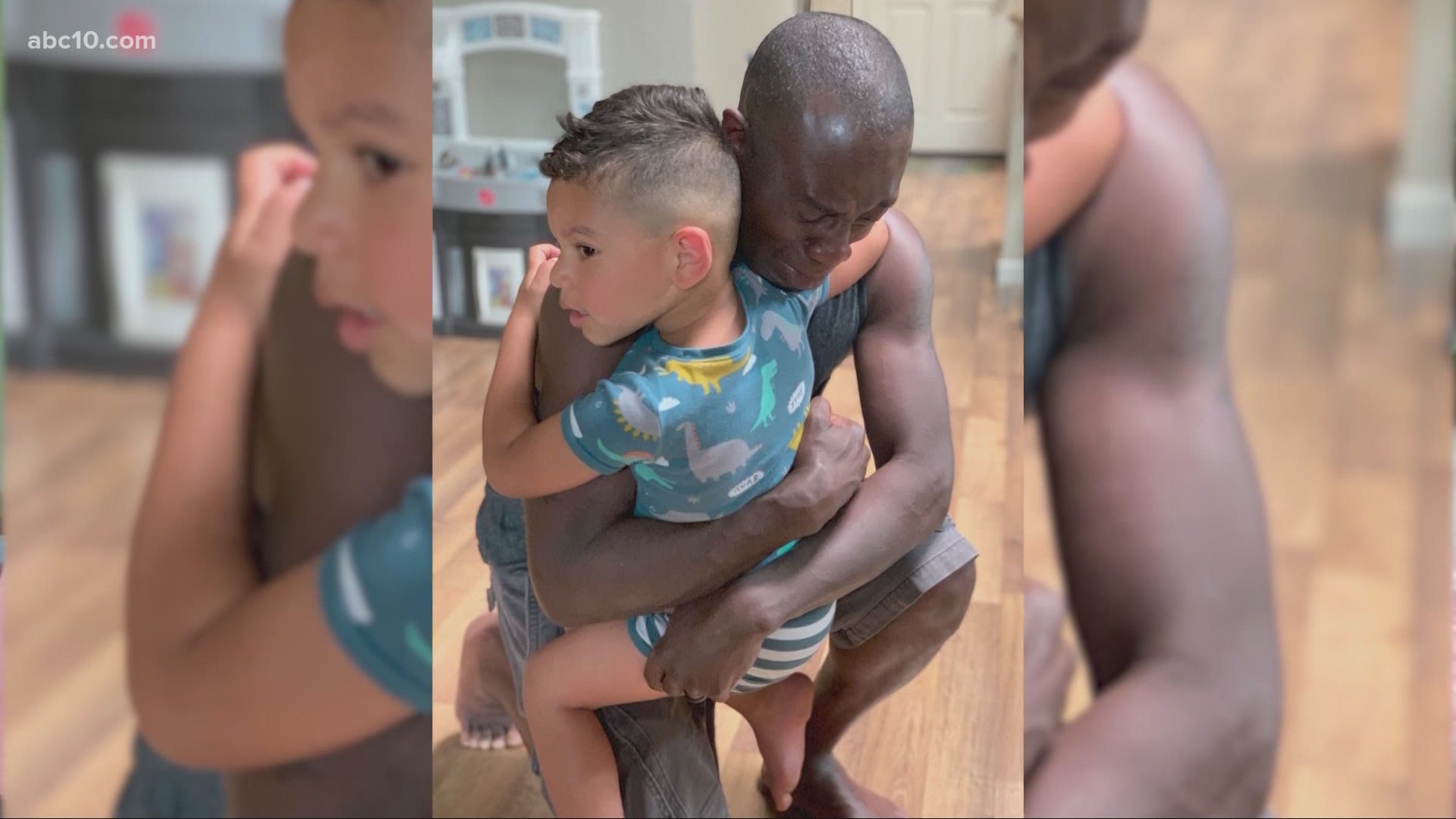 ROSEVILLE, Calif. — As the nation erupts into protests against police brutality, a spontaneous moment between Roseville family members reminds us all of the emotional toll that many people of color are feeling today.

"It was just a moment that Robert was overcome with emotion, and he just wanted to come in and hug Quincy," Jennifer said in an interview with ABC10. "I was sitting just a few feet away from them. I thought 'what a great way to capture the moment,' so Quincy can have that to look back on to know that his father loves him."

Robert explains that the moment in the photo was brought on by both the pandemic and witnessing recent social media posts capturing police violence. The dual experiences triggered a "fight or flight" response for the father of two.

"As I see more of the images of…people my skin color getting hurt, it causes me to have to open up another level in conversation to my kids…as people of color in this country...have to explain, especially when it comes to law enforcement," Robert said.

Right before the photo, Robert had connected with relatives in different parts of the country. Those poignant conversations caused overwhelming feeling to well up in Robert and culminated in the powerful expression of love.

In the photo, Robert is passionate as he holds his son. There are tears in his eyes, and the viewer can see the strong bond that links father and son.

Credit: Jennifer Ingraham-Gonsalves
A photo of Robert and Quincy together.

During the interview, Quincy floats in and out of view. At 3, he is curious and active, impatient to be exploring the world. But when looking to the future, Quincy's parents are understandably worried by what is going on in the world today.

"The tears you see in this photo are because eventually, our beautiful son will step into the world as a man of color," Jennifer said.

In the moment, Robert says his emotions were paradoxical. He felt proud, but fearful. Though Robert lost his own father at a young age, he wants to make sure his son knows that it was okay to be afraid sometimes, especially as a person of color.

Jennifer and Robert have been together for 17 years. They both grew up in Quincy, CA but have lived in Roseville for the last 13 years with their kids, Quincy and Amelia, 12.

Credit: Jennifer Ingraham-Gonsalves
Amelia and Quincy Gonsalves enjoy a day by the water.

Robert works in construction as a pipe layer. He says that he has experienced racism based on the color of his skin before in his line of work.

"I have to go to areas sometimes where I may not be welcome, or I may be perceived as a threat when all I'm doing is going to work," Robert said.

Every morning starts with the same routine–saying goodbye to the family with kisses and love. It's always with added risk, says Robert, that he may not come home. That is a reality into which he has had to ease his children.

That's why the photo was so important to the family. Robert and Jennifer agree: their children need to know their father loved them, no matter what happens.

"As long as my children know that I did my best to fight for them — as just a man — but in regards to whatever circumstances that may happen, I always loved them," Robert said.

Robert and Jennifer have been trying to talk to their children about the recent protests in a way that is constructive.

Jennifer uses open-ended questions to probe her children's feelings towards the current civil unrest, allowing them to speak their minds in an open and honest way.

Amelia has also participated in the Roseville Police Activities League, an organization that aims to build positive relationships between youth and police officers. Jennifer and Robert plan for Quincy to also participate in the program, allowing both children to build trust in law enforcement.

"In our home, we believe in love and the best of humanity despite the discord we’re witnessing. Our children will be part of the solution, not part of the problem," Jennifer said.

FIND NEWS IN YOUR NEIGHBORHOOD BY DOWNLOADING OUR APP:

►Get our newsletter via email! Sign up now for the Daily Blend Newsletter