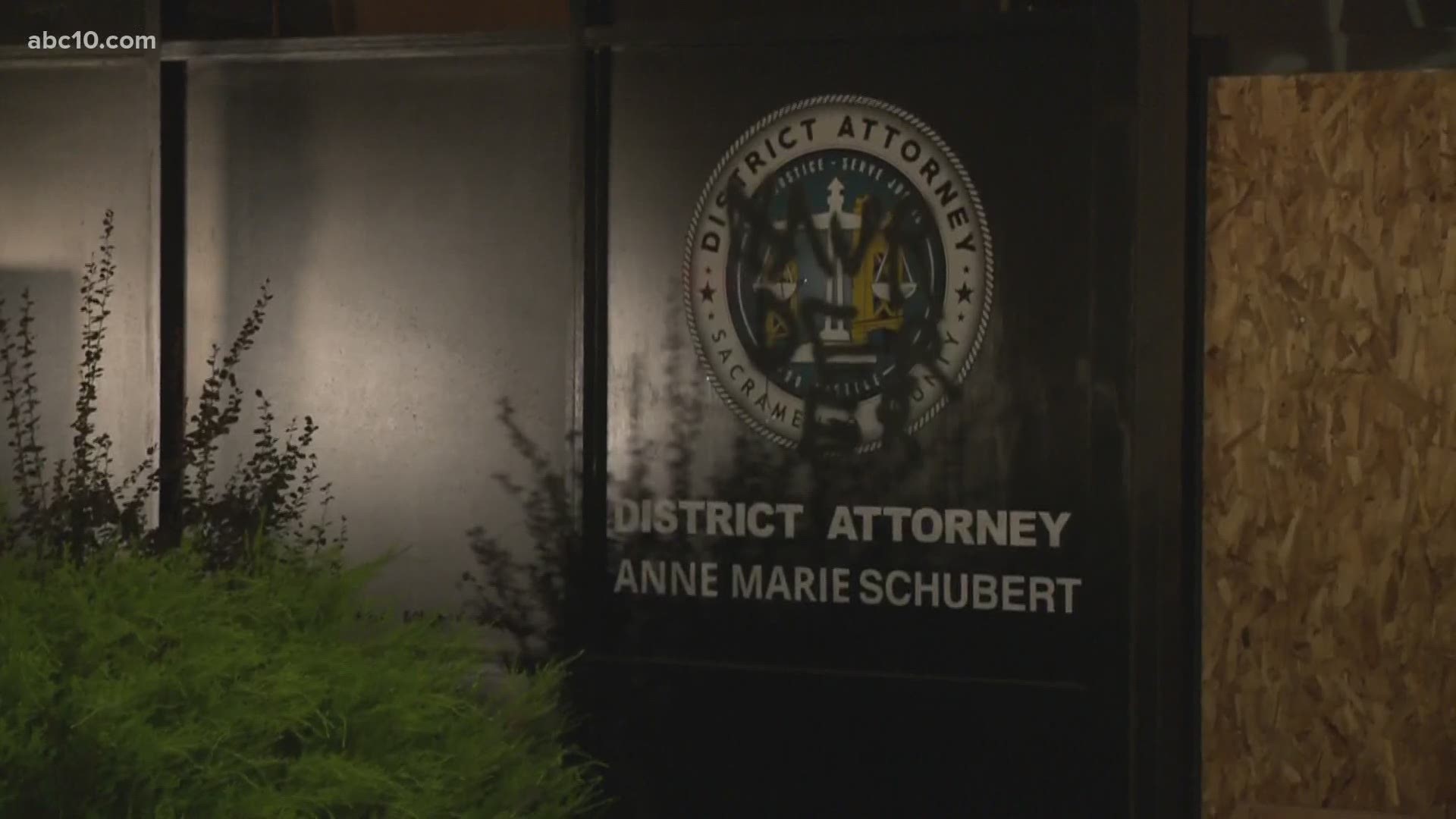 The sheriff of Sacramento County says he has requested the deployment of National Guard troops in the California capital after some people protesting the shooting of Jacob Blake in Wisconsin smashed business windows and tried to set the district attorney's office on fire.

No arrests were made in Thursday night's vandalism, which followed a peaceful rally earlier that day by another group.

The Sacramento district attorney's office blames a local Antifa group, referring to it as a domestic terrorism organization, and says those identified as having committed violence will be prosecuted.

"Contrary to the peaceful protest held earlier in the evening, Sacramento Antifa, along with outside Antifa groups, wreaked havoc on the Sacramento community, threatening media reporters and others, damaging many buildings, and trying to set a fire in the lobby of the District Attorney’s office," Schubert said.

She said the organization has threatened more attacks in the coming days.

The district attorney's office will prosecute those involved and arrest them "to the full extent of the law."

Crowds were mostly gone from downtown by midnight. In a tweet, the Sacramento Police Department said no arrests have yet been made, but they would be following up with reports about vandalism. Law enforcement was stationed throughout the downtown area overnight as a precaution. 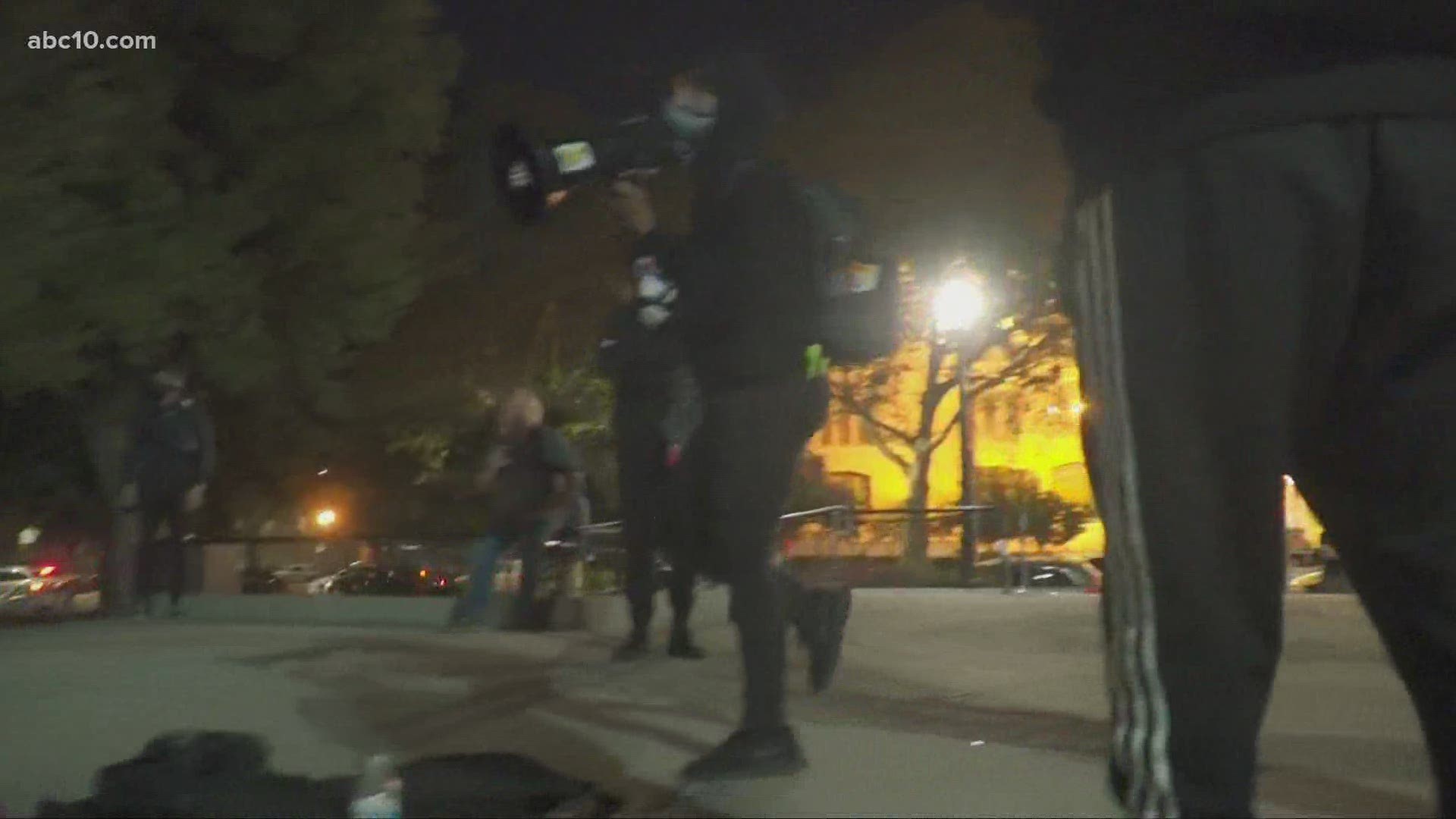 The second round of protests in downtown Sacramento turned destructive, just as city leaders feared, with graffiti and vandalism done to the district attorney's office building, the Sacramento County Sheriff's OFfice building, and several other city and state buildings.

Police reported a group of protesters attempting to set a fire inside of the DA's building, but it was quickly extinguished.

With umbrellas and strobe lights in hand, protesters attempted to block an ABC10 field crews from documenting the night's events.

A few small confrontations broke out, one between a biker and the protesters near Cesar Chavez Park and another between protesters and members of a Mexican-American veterans group at a memorial on the Capitol grounds.

Rolling closures are occurring in the downtown area for a march. Traffic may be impacted. Please plan accordingly and use alternate routes if possible pic.twitter.com/aRFKGwgKLI

Original story:
The downtown area of Sacramento is expecting two rallies on Thursday calling for justice for Jacob Blake, Jr. One of the rallies, however, has city officials worried it could become violent.

Blake is the Wisconsin man who was shot in the back seven times by Kenosha Police officers on Aug. 23. Blake survived the shooting, but he remains in serious condition in the hospital. Doctors say he is paralyzed from the waist down.

The first rally in downtown Sacramento is planned for 5:30 p.m. The second rally is planned to begin at 8:30 p.m. at Cesar Chavez Plaza.

Mayor Darrell Steinberg addressed the planned rallies, saying he is proud of living in a city of residents who take to the street to call for others' justice. However, he is concerned about the second rally.

"Vandalizing or destroying Sacramento’s businesses is not principled protest," Steinberg said in a statement. "These hard-working business owners, many from our diverse communities, are struggling to serve our community during the COVID pandemic."

Steinberg did not say why he believed the second rally could become destructive.

Tonight we expect two protests. I am grateful people care enough to take to the streets after a hard day's work to stand in solidarity with one another and communities in pain. It's the second, after-dark protest where I have an issue.https://t.co/NyMsDfL38J

Protestors marched to La Cosecha Mexican restaurant in the park where Steinberg was having dinner. When he saw the ABC10 cameras, Steinberg got up to join the march.

“Until, either you’re gone or your actions match what your people are asking you to do, your citizens won’t have any word for you and that’s what we’re here to say,” JUICE co-founder Nehemiah Johnson said to the mayor.

After a tense exchange, the protestors marched on without the mayor. Steinberg then gave remarks to the media.

Sacramento Police said officers will be performing rolling street closures due to the rallies. Police are asking drivers to use alternative routes when possible because the demonstrations could impact traffic.

Rolling closures are occurring in the downtown area for a march. Traffic may be impacted. Please plan accordingly and use alternate routes if possible pic.twitter.com/aRFKGwgKLI

Sacramento Regional Transit officials said they will be suspending services in downtown starting at 7:30 p.m. because they are expecting large crowds to show up to the rallies.

Yolobus officials said services to downtown Sacramento will be limited starting at 7:30 p.m. due to the planned rallies.

Rider Alert: Due to the large number of people expected to participate in planned protests this evening SacRT will temporarily suspend light rail, bus and SmaRT Ride service in the downtown Sacramento/CBD at ~7:30 p.m. tonight (Thursday, August 27) https://t.co/jcDHtmx249 pic.twitter.com/egiKMm8HbW