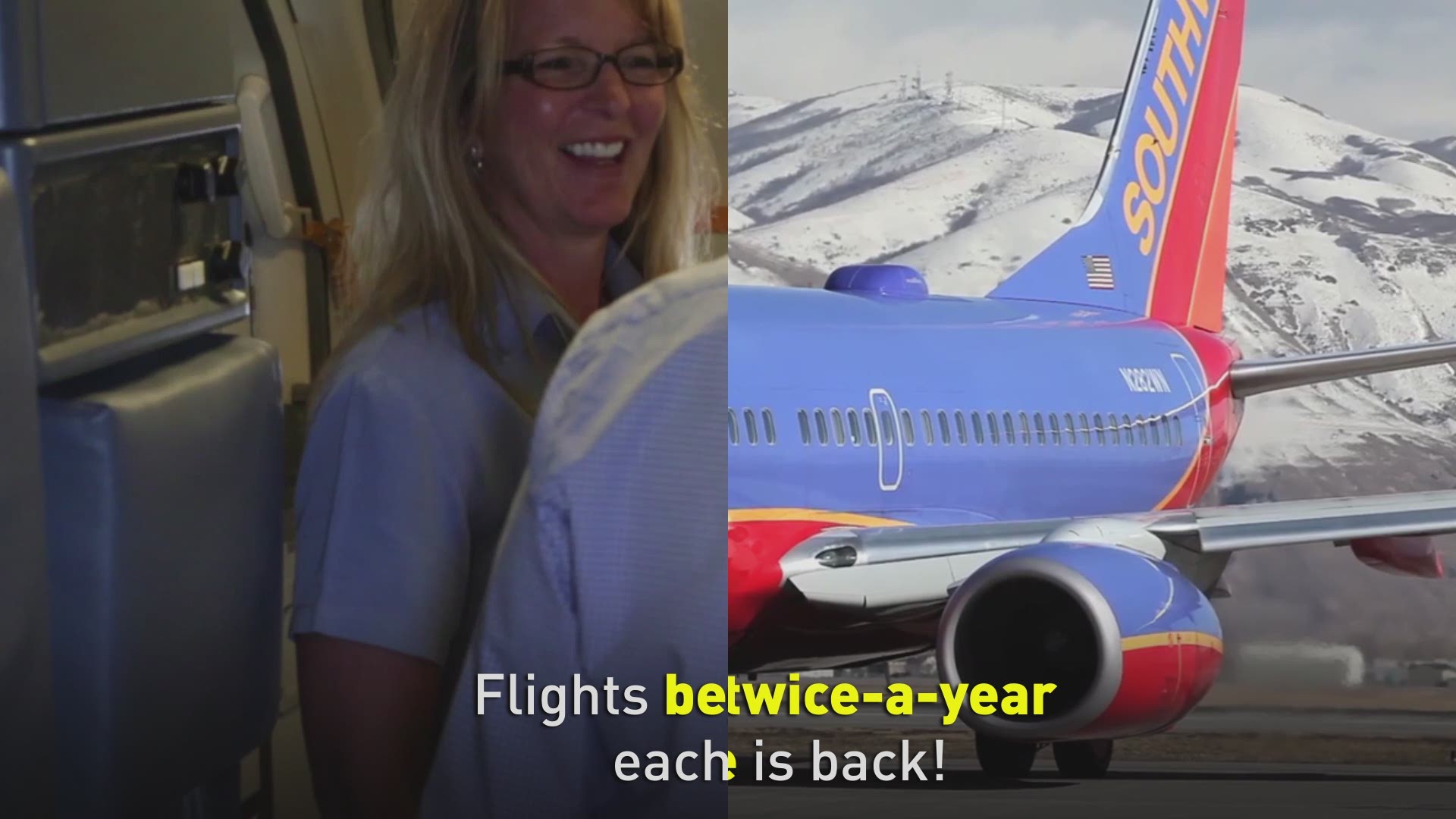 Southwest’s big twice-a-year fare sale is back, with round-trip fares below $100 on dozens of the carrier’s shortest routes.

The sale fares also include longer routes, with the price of flights loosely tied to distance. Flights begin at $49 each way on Southwest’s shortest routes and increase to $79, $99 or $129 each way for longer flights.

The sale launched Tuesday morning and is good for travel from Nov. 28 through Dec. 19 and from Jan. 3 through Feb. 13.

The sale covers a shorter window than last year's version, when the booking window began Oct. 31.

However, other fine print mirrors restrictions from previous years of Southwest's big sales. Flights on Fridays and Sundays are excluded. Schedules for Southwest’s Florida, Nevada and Puerto Rico flights have additional day-of-week restrictions, though the sale's booking window for Puerto Rico extends through Feb. 28. Orange County flights also were excluded from the sale.

More fine print: The sale applies specifically to nonstop flights, though many connecting itineraries may also show lower-than-usual fares that mirror sale fares. Seats sold at the sale prices are capacity controlled, meaning the cheapest seats will likely sell out on individual flights as the sale progresses.

Some of Southwest’s international routes are also included in the sale, though those routes come with significant day-of-travel restrictions (Tuesdays and Wednesdays only). One-way fares to international destinations were listed for as low as $99, but most were higher and availability scattered. The travel window for international routes is from Nov. 28 through Dec. 12 and from Jan. 6 through March 12.

Regardless of the details, bargain seekers will have to act quickly to snag the fares. The sale ends on Thursday (Oct. 4) at 11:59 p.m. local time in the city of the departing flight. (Full sale details)

A Tuesday morning spot-check of fares showed fairly broad availability of the sale fares. The $49 fares do appear on most days on the advertised routes, though some routes show greater availability than others.

Southwest's "Low Fare Calendar" offered a quick way for customers to find the sale fares on any particular route.

The broad fare sale has become a staple for Southwest. It has rolled out similar three-day sales each June and October for the past several years. One sale from June 2015 proved so popular that it crashed Southwest’s website, prompting the carrier to extend that particular sale by an additional 24 hours. Southwest's website did not appear to be having any such issues during the current sale.

Southwest has used the sales to generate buzz and -- perhaps more importantly -- to sell seats during what are usually some of the slowest travel periods of the year.

Southwest ended the precise mileage component of its big sales a few years ago, but its big sales have continued to closely mimic its previous distance-based promotions. The carrier's four advertised sale-fare tiers for this sale — $49, $79, $99 and $129 each way — are similar to the fares Southwest offered on its distance-based sales of years past.

Whatever the details, travelers can snag advertised round-trip fares for less than $100 on short routes.

Among the sub-$100 options with reasonable availability as of Tuesday morning were:

There were also some below-average fares on some of Southwest's longer routes. Some that were showing availability early Tuesday included: