A protest over the shooting of an unarmed black man by Sacramento police has ended with at least 80 arrests, police said. Among those detained were clergy and a reporter. 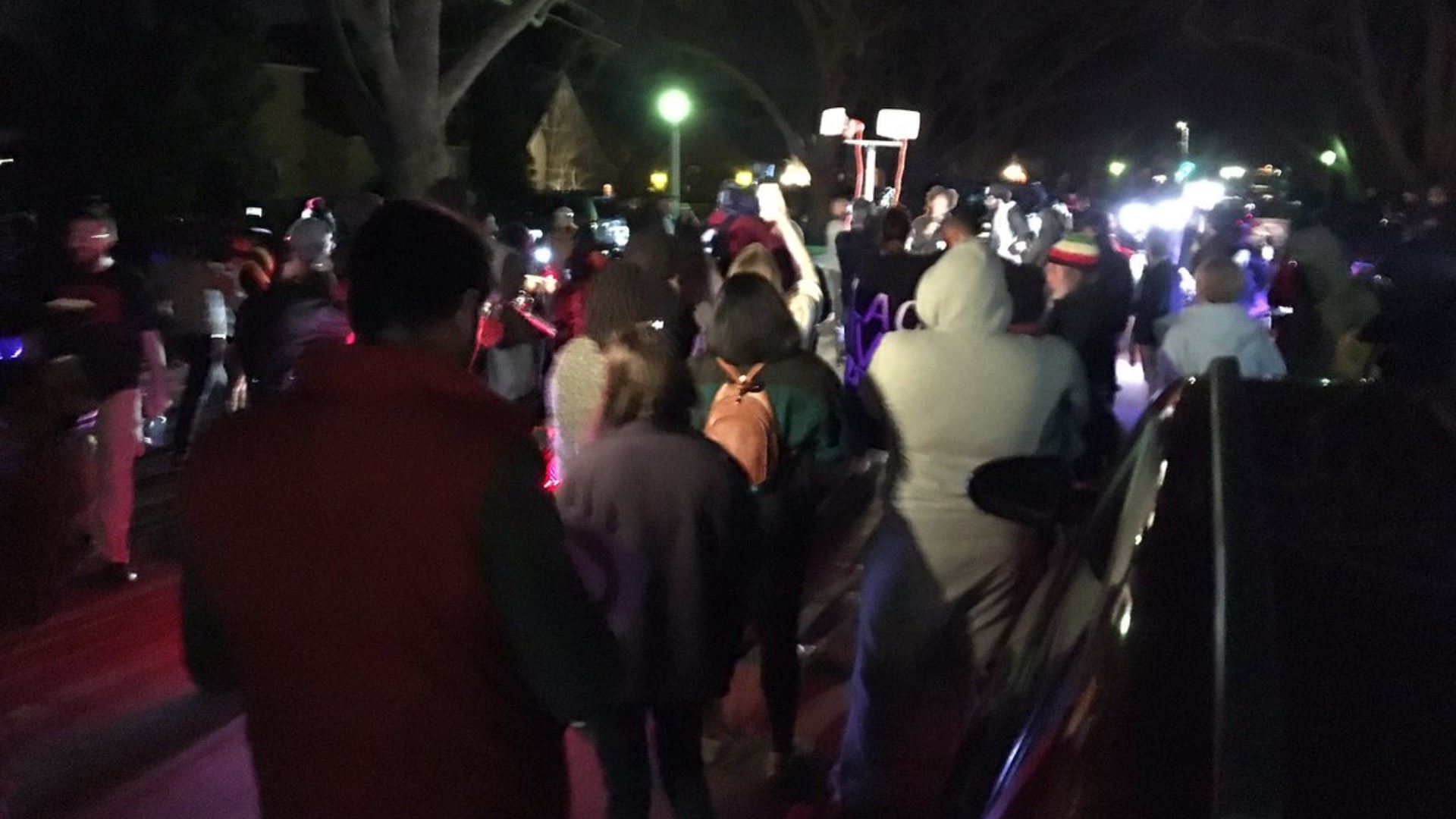 A protest over Sacramento District Attorney's decision not to charge the officers who fatally shot Stephon Clark ended with at least 80 arrests, police said. Among those detained were clergy and a reporter.

Sacramento Police Captain Norm Leong tweeted lat Monday night that protests ended with "80 plus arrests. Still processing it all." About 2 ½ hours into the demonstration, police ordered protesters to disperse.

The demonstrators who were arrested were taken to a larger holding facility at Cal Expo where they were slowly being released early Tuesday morning.

"I'm very disappointed that the protest ended the way it did," Steinberg said. "I have many questions about what caused the order to disperse and the subsequent arrests. I will withhold further comment until I get answers to these crucial questions tonight or tomorrow morning. No matter the reason an order to disperse was given, no member of the press should be detained for doing their job."

A protest in East Sacramento over the Sacramento County District Attorney's decision to not charge the officers in the shooting death of Stephon Clark has resulted in demonstrators being detained.

The officers said they thought the 22-year-old Clark had a gun but he was holding a cellphone.

Dozens of people staged a march around Monday evening in a wealthy area of the city that was also said to be home to leadership in the community.

About 2 ½ hours into the demonstration, police ordered protesters to disperse.

According to Sacramento Police Captain Norm Leong, officers have made at least 30 arrests. Among those detained were clergy and a reporter, however, the reporter was later released.

Protesters took to the streets of East Sacramento Monday evening in opposition to Sacramento County District Attorney Anne Marie Schubert's decision to not charge the officer in the Stephon Clark case.

The protesters chose to march through East Sacramento streets due to what they say is the wealth in the neighborhood and it being a home to leadership in the community.

Sonia Lewis was one of the protestors.

“I am disgusted at DA Schubert. We already knew what – and expected what the outcome would be,” she said, about the Stephon Clark announcement over the weekend.

Some people assumed protestors would march at the Sacramento King’s game, like they did in the wake of Clark’s death.

“They predicting us to be at the Kings game. That’s easy, we’ve done that. What we want to do is make sure that every community in Sacramento, in Sacramento County, understands and feels the pain that Meadowview is experiencing,” Lewis said. “Everybody needs to understand that this is a city-wide issue. We no longer are going to stand by and let our city officials ignore continued crime and death and terrorism by Sacramento Police Department.”

Asked if protestors believe there are mixed opinions in the Fab 40s neighborhood, with some people supportive of and sympathetic to their cause, Lewis said, “I think that there are mixed opinions, but what they have are dollar power. They have political power. They have generational wealth. They have power that people in Meadowview and Oak Park and Del Paso Heights don’t have, and so they can flex their power. But they’re comfortable right now, and so we’re here to disturb their comfortability.”

Starting around 7:50 p.m., Sacramento police officers began announcing to the crowd via loudspeaker:

"Due to acts of vandalism and criminal activity associated with this march, I hereby declare this to be an unlawful assembly, and, in the name of the people of the state of California, order all those assembled at 50th and Folsom to disperse immediately," the officer said, adding that those who do not are subject to "arrest...chemical agents or electrical devices."

"Those who remain risk physical injury," the officer added.

Despite the marching and the chants, some East Sacramento residents voiced their support of the protest.

“I’m actually quite in favor of it. I think that they’re making very valid points that need to be heard, and I’m very much in favor of peaceful protest,” said Paige Gorham, a resident of East Sacramento since 1977. “I was in the middle of making dinner and then eating dinner... otherwise, I would’ve probably walked a couple of blocks with them, just out of solidarity.”

Gorham followed the Clark news since the shooting happened.

“Looking at the Stephon Clark situation, it’s been heart-wrenching since day one,” Gorham said. “I hope that people in this community and in this neighborhood and throughout Sacramento and the nation have heard about this case and are aware of the issues involved. I hope that we’re not in an East Sac bubble. Our household certainly isn’t.”

Even with the chanting and marching happening the neighborhood, she believed that it was far from the biggest inconvenience that the area has experienced. The amount of people and traffic from Halloween and Christmas is usually more disruptive, Gorham said.

Alexander Nowinski, a neighbor from a few blocks away, was chatting with other neighbors and discussing the protest.

“I think they’re trying to address legitimate issues. I think everybody shares a concern over civil liberties and excessive force,” Nowinski told ABC10. “There are aspects of what’s going on tonight that seem a bit polarizing to me, targeting this neighborhood as particularly linked or supportive of those problems is just really not consistent with my experience growing up here.”

In his neighborhood, he considers it to be largely middle class and filled with people of all ages, skin colors, backgrounds and beliefs.

“There are families that have been here for ages, before the neighborhood even really had a reputation for a particular affluence,” Nowinski said. “By and large, you know, politically, economically, in terms of opinion, I’ve always known it to be a fairly mixed neighborhood and just a great place to live and grow up.”

1 / 8
KXTV
The marchers started at the Sacramento Trader Joe's on Folsom Boulevard. In a press release, The Table Sacramento announced the event, named "Disobey and Disrupt", in response to the DA's decision.

Protesters are marching through East Sacramento in opposition to Sacramento County District Attorney Anne Marie Schubert 's decision to not charge the officers involved in the shooting death of Stephon Clark.

The marchers started at the Sacramento Trader Joe's on Folsom Boulevard. In a press release, The Table Sacramento announced the event, named "Disobey and Disrupt", in response to the DA's decision.

They say the East Sacramento location was chosen due to the neighborhood's wealth and it being a home to leadership in the community.

“Our plan was to bring the issue to a neighborhood whose residents have proximity to decision-making power,” said J. Ama Mantey, an affiliate member of The Table Sacramento in a press release. “This is a neighborhood that would likely never experience such a tragic and violent loss of one of its residents, so we are bringing the discomfort and pain of our trauma to their doorstep in hopes of spurring their solidarity and political engagement.”

Among their frustrations was Schubert's focus on the actions and alleged motivations of Stephon Clark and what the organization said was no "equitable investigation into the officers' text messages, state of mind, google searches, or toxicology reports."

“Her job was to determine if a crime had been committed by the two officers, Terence Mercadal and Jared Robinet, the only people in the interaction who had weapons and discharged those weapons 20 times to result in a loss of life,” said Joshua Robinson in a statement, on behalf of the Table Sacramento. “Yet instead she focused her investigation on the victim, Stephon Clark. This was a misguided attempt to malign the victim by providing details the officers’ had no knowledge of during the incident in an attempt to explain to the Sacramento community why a young black man deserved to die.”

In response to the loss of life and response, the organization has issued the following demands on both the City and County of Sacramento:

“The five recommendations represent a series of policy strategies to prevent deadly encounters with police and to ensure that if encounters occur, officers who behave irresponsibly are held accountable by the personnel and judicial processes,” said Flojaune Cofer in a statement, affiliate member of The Table. “We will continue to engage in and encourage nonviolent civil disobedience until these recommendations are adopted.”

In response to no charges being brought against the officers in the shooting death of Stephon Clark, his family has called for legislative reform. In an effort to help the community heal, Stevante Clark announced an event to both help those communities heal and honor the memory of his brother.