Members of the Sacramento Police Department gather every Friday with members of Sacramento's Oak Park neighborhood to walk for peace. 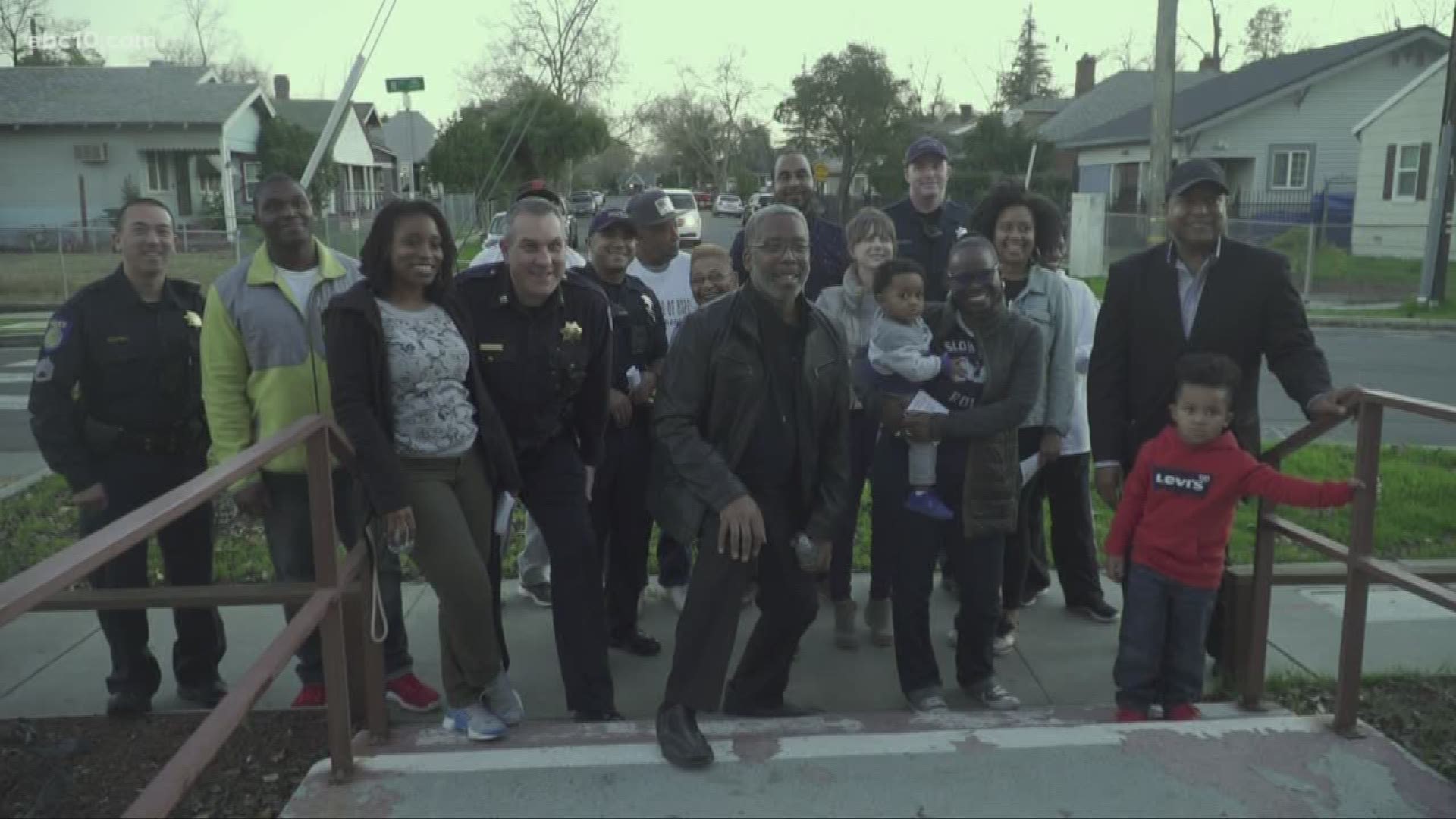 SACRAMENTO, Calif. — It’s no secret that tension exists between police departments and communities of color – both nationwide and in Sacramento. But a grassroots effort in Oak Park is working to improve that dynamic, one Friday night at a time.

It’s an effort that’s especially important during times of heightened tension. Every Friday night, for much of the past seven years, community members in the Oak Park neighborhood have gathered to walked for peace.

“Stop the Violence” is printed on shirts some participants wear. Members of the Sacramento Police Department join with residents of Oak Park and beyond to walk different Oak Park neighborhoods, meeting the people who live there and showing each other what they have in common.

This comes at a time when divisions can seem stronger than ever.

The Sacramento City Council angered some community members this week by putting on its agenda a discussion about banning certain items during protests, including glass bottles, baseball bats and chunks of rock.

Council members removed the item shortly before their Tuesday night meeting, but people still showed up to express their opposition to the idea.

Some believed that report could come out as early as Friday, though by the close of business, no report had been issued.

Also this week, a vigil was held for Marshall Miles. Miles was a 36-year-old black man who died in the custody of the Sacramento Sheriff’s Office in October.

The Oak Park Peace Walk promotes communication and understanding between police officers and communities of color, hoping to foster safety by building bridges and preventing crime.

“The community gets to see their law enforcement officers, who are here to support and keep them safe, in a whole different light,” said local pastor Rev. Anthony Sadler, who is black. “They’re not here to investigate anything. There’s nobody going to get arrested tonight.”

The benefit goes the other way, too, he said, by humanizing communities of color for police officers.

“They may have been on the force 1 or 2 or even 10 years, but they may never have served in a community of color. It’s not a hit, it’s not a dig; It’s just their life experience doesn’t place them around people that have different backgrounds,” Sadler explained. “So this gives them an opportunity to get comfortable with the community, too, and gives the community an opportunity to get comfortable with them.”

Sacramento Police Capt. Charles Husted, who is white, attended nearby Sac High as a teen and spent a lot of time with friends in Oak Park while growing up. He attends the Peace Walk weekly.

“It’s beyond beneficial. It’s absolutely necessary. We need to work together as a community – because the police are a part of the community,” Husted said. “I’ve been here (in Oak Park) for a lot of years, and when you start talking about people and they realize, ‘Oh, you’re part of the neighborhood, too? Oh, OK, I can talk to you as well.’”

Regardless of what’s happening in the community any given week, he said – whether or not tensions are especially heightened – the walk remains important.

This Friday night, about two dozen people – officers and community members alike, with black and white people from both groups – started and ended their weekly walk at New Saint Bethel Baptist Church. At the end, a community member approached Husted to share her concerns about human trafficking in the area.

The walk didn’t solve the city’s problems, but it did form important bonds that can lead to a stronger community.

The weekly walks are a partnership between the Black Child Legacy Campaign – part of the Greater Sacramento Urban League – and the Sacramento Police Department.

Newly released body cam video shows kids cursing and harassing officers waiting for a tow truck to come remove a vehicle. The video may be disturbing to some, but it's just one example of how quickly things can escalate during a traffic stop.