The legislation would change the standard from using "reasonable force" to "necessary force." 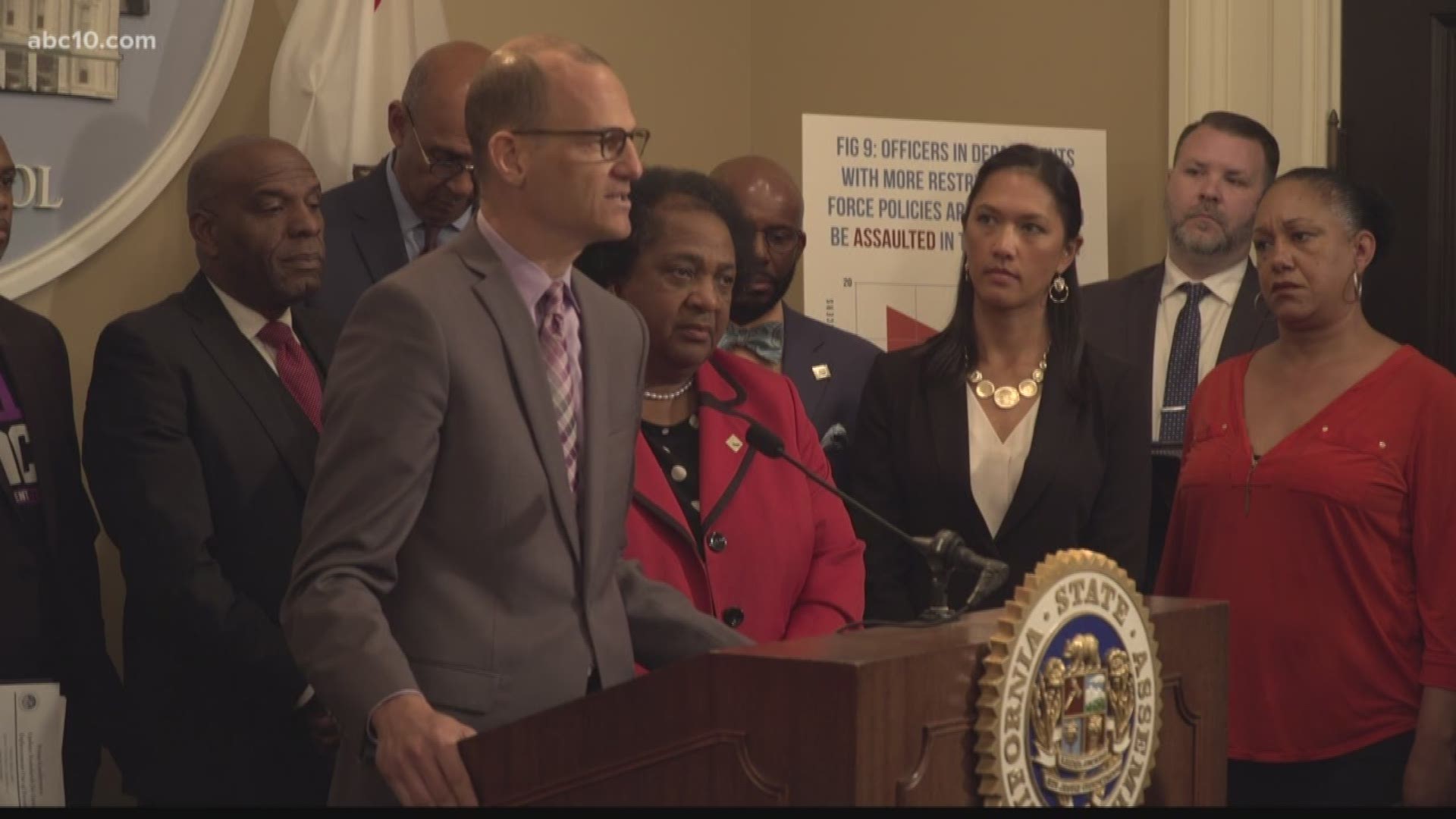 SACRAMENTO, Calif. (AP) — Several lawmakers and the family of a 22-year-old unarmed black man who was fatally shot by police proposed Tuesday that California become the first state to significantly restrict when officers can open fire.

The legislation would change the standard from using "reasonable force" to "necessary force."

That means officers would be allowed to shoot only if "there were no other reasonable alternatives to the use of deadly force" to prevent imminent serious injury or death, said Lizzie Buchen, legislative advocate for the American Civil Liberties Union, which is among the groups behind the measure.

"We need to ensure that our state policy governing the use of deadly force stresses the sanctity of human life and is only used when necessary," said Assemblywoman Shirley Weber, a San Diego Democrat who introduced the bill. "Deadly force can be used, but only when it is completely necessary."

The goal is to encourage officers to try to defuse confrontations or use less deadly weapons, said Democratic Assemblyman Kevin McCarty of Sacramento, who is co-authoring the legislation.

"We should no longer be the target practice or victims of a shoot first, ask questions later police force," said Assemblyman Chris Holden, chairman of the Legislative Black Caucus.

But some in law enforcement called the proposal irresponsible and unworkable.

Officers already use deadly force only when necessary and are taught to try to defuse dangerous situations first when possible, said Ed Obayashi, a Plumas County sheriff's deputy and special prosecutor who trains officers and testifies in court on police use of force.

Tinkering with legal protections for police could make it more difficult to hire officers and be dangerous because they may hesitate when confronting an armed suspect, threatening themselves and bystanders, Obayashi said.

Spokesmen for the California Police Chiefs Association and California State Sheriffs' Association said they had not seen the proposal and could not comment.

Weber, who heads a public safety oversight committee, said she hopes the recent heavily publicized string of police shootings of minority suspects and mass protests over last month's death of Stephon Clark will be enough to overcome any law enforcement resistance.

Two Sacramento officers chased Clark, who was suspected of breaking into cars, into his grandparents' darkened backyard and opened fire within seconds and without identifying themselves as police because they said they thought he had a gun. Investigators found only a cellphone.

Changing the legal standard might mean that more people confronted by police "could go home. They may be able to wake up" the next day, said Clark's uncle, family spokesman Curtis Gordon.

"A life may be saved in that blink" of time before officers open fire, he said. "If you feel some sort of repercussion, you may act a little more cautiously."

Sacramento Police Chief Daniel Hahn told The Associated Press last week that he is open to examining the department's policies on pursuing suspects and other practices but warned that changes could carry consequences.

California's current standard makes it rare for officers to be charged after a shooting and rarer still for them to be convicted. Frequently it's because of the doctrine of "reasonable fear." If prosecutors or jurors believe that officers have a reason to fear for their safety, they can use deadly force.

The tougher proposed standard could require officers to delay confronting a suspect they fear may be armed until backup arrives or force police to give explicit verbal warnings that suspects will be killed unless they drop the weapon," said Buchen of the ACLU.

The proposal would open officers who don't follow the stricter rules to discipline or firing, sometimes even criminal charges.

The ACLU says California would be the first state to adopt such a standard, though some other law enforcement agencies, including San Francisco, have similar or more restrictive rules.

Cities' strict standards are generally for situations where there is time to de-escalate volatile situations, such as with people who are mentally unstable, Obayashi said.

The lawmakers and ACLU point to a 2016 study by policy analyst and racial justice advocate Samuel Sinyangwe that analyzed use-of-force policies by major U.S. police departments. He found that officers working under more restrictive policies are less likely to kill and less likely to be killed or assaulted.

Officers fatally shot 162 people in California last year, only half of whom had guns, the lawmakers said.

They cited studies showing that black people are far more likely than white people to die in police shootings and that California has five of the nation's 15 police departments with the highest per capita rates of killings by officers: Bakersfield, Stockton, Long Beach, Santa Ana and San Bernardino.