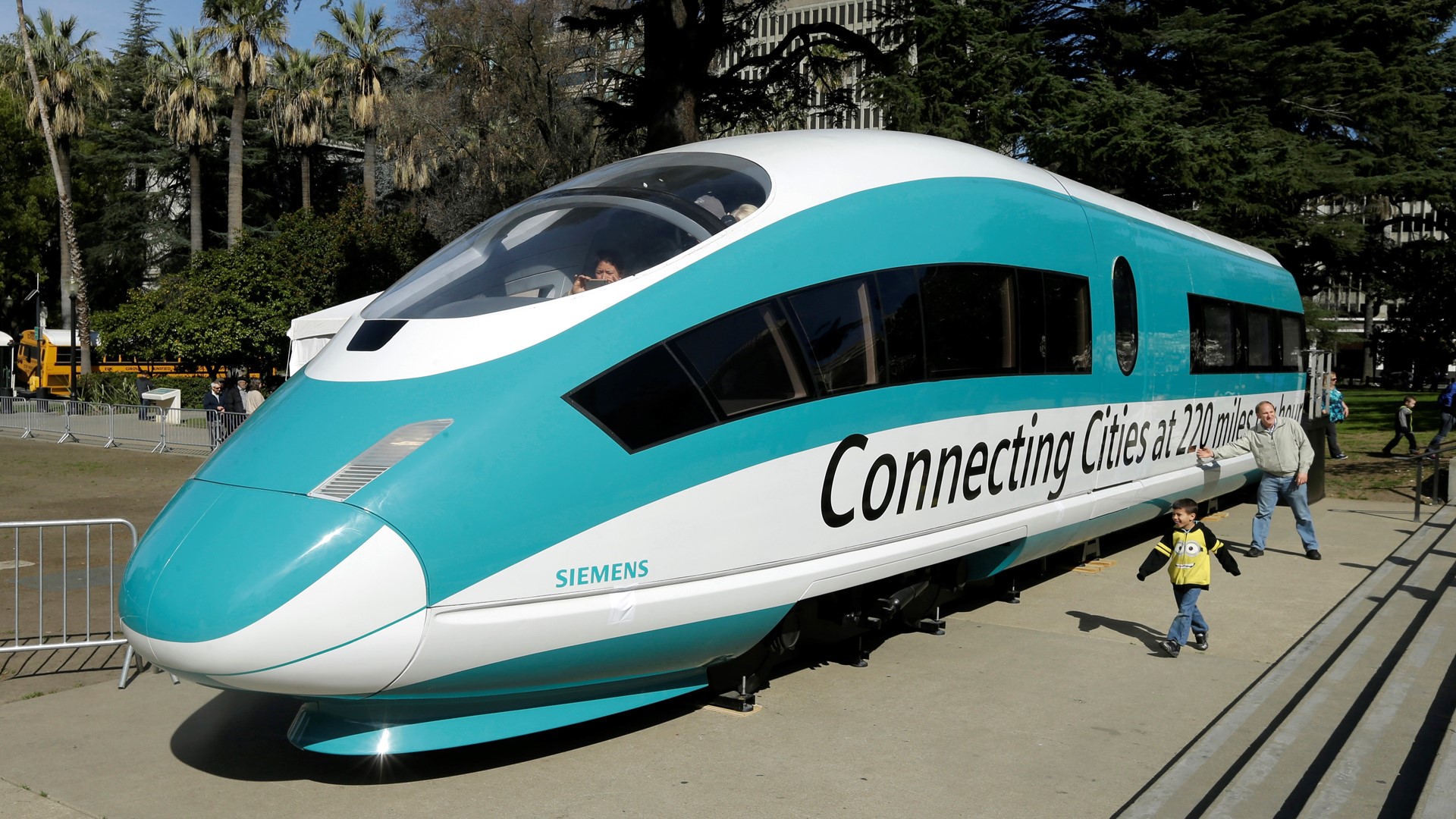 Disputes over President Donald Trump's border wall and California's bullet train are intensifying the feud between the White House and the nation's most populous state.

The Trump administration on Tuesday said it plans to cancel or claw back $3.5 billion in federal dollars allocated to California's high-speed rail project, seizing on Gov. Gavin Newsom's recent decision to scale back plans for a San Francisco-to-Los Angeles route.

Newsom branded the move "political retribution" for the state's lawsuit against Trump's declaration of a national emergency. California led a 16-state coalition in filing the suit Monday, challenging Trump's power to declare an emergency to earn more money to build a wall along the U.S.-Mexico border.

"It's no coincidence that the Administration's threat comes 24 hours after California led 16 states in challenging the President's farcical 'national emergency,'" Newsom said in a statement. "This is clear political retribution by President Trump, and we won't sit idly by."

RELATED: Trump says he has 'absolute right' to declare emergency

It's the latest spat between Trump and California, which has styled itself as the Democratic-led "resistance" to the administration. Newsom, less than two months into his tenure, has appeared more eager to hit back at Trump than former California Gov. Jerry Brown. The lawsuit is California's 46th against the Trump administration.

Using a broad interpretation of his executive powers, Trump declared an emergency last week to obtain wall funding beyond the $1.4 billion Congress approved for border security. The move allows the president to bypass Congress to use money from the Pentagon and other budgets.

Trump's use of the emergency declaration has drawn bipartisan criticism and faces a number of legal challenges.

Still the president has told reporters he expects to prevail.

"I think in the end we're going to be very successful with the lawsuit," Trump told reporters, calling it an "open and closed" case.

Trump had earlier singled out California for its lead role in the suit, seeking to link the state's high-speed rail project to his plan for the wall.

On Twitter, Trump claimed the "failed Fast Train project" was beset by "world record setting" cost overruns and had become "hundreds of times more expensive than the desperately needed Wall!"

The estimated cost for a San Francisco-to-Los Angeles train has more than doubled to $77 billion. That's about 13 times the $5.7 billion Trump sought unsuccessfully from Congress to build the wall.

Hours later, the U.S. Department of Transportation told California it planned to cancel nearly $1 billion in federal money allocated to the rail project and wanted the state to return $2.5 billion it had already spent.

Trump's comments about a "failed" project followed Newsom's comments last week that the current plan for an LA-San Francisco train would cost too much and take too long. Instead, he said he'd focus immediately on a line through the Central Valley while still doing environmental work on the full line. That work is a requirement for keeping the federal money.

Still, the U.S. Department of Transportation said Newsom's remarks reinforced concerns about the project's ability to deliver. The department wrote Newsom's comments mark a "significant retreat from the State's initial vision and commitment and frustrated the purpose for which the Federal funding was awarded."

Credit: AP
Lenny Mendonca, right, was elected chairman of The California High-Speed Rail Authority's board of directors, during a board meeting Tuesday, Feb. 19, 2019, in Sacramento, Calif. (AP Photo/Rich Pedroncelli)

California Republicans who have long called the project a waste of money applauded the Trump administration's move to take back the money.

"It is time to move on from the broken high-speed rail project and redirect our efforts to infrastructure projects that work for Californians," said U.S. House Minority Leader Kevin McCarthy of Bakersfield, a city on the train's route.

But Newsom said the state intends to keep the money. Losing it would be a major blow to the chronically underfunded project.

"This is California's money, and we are going to fight for it," he said.

The agreement with the federal government allows the administration to withhold or take back the money if the state fails to make "adequate progress" or "complete the project or one of its tasks."

If the federal government decides to take the money back, it doesn't have to wait for California to write a check. Instead it could withhold money from other transportation projects.

Tuesday's comments won't be the last; the administration has given California until March 5 to respond formally.

WATCH MORE:
Did President Bush approve $50 billion for the wall in 2006?

Did President George W. Bush approve $50 billion for the border wall in 2006? With a current fight over $5 billion in border wall funding, one of ABC10's viewers asked if President Bush actually approved that funding and where that money went. Brandon Rittman verifies.