One video even showed a protester climb onto the hood of a California Highway Patrol (CHP) vehicle. The CHP officer accelerates away throwing the protester off. 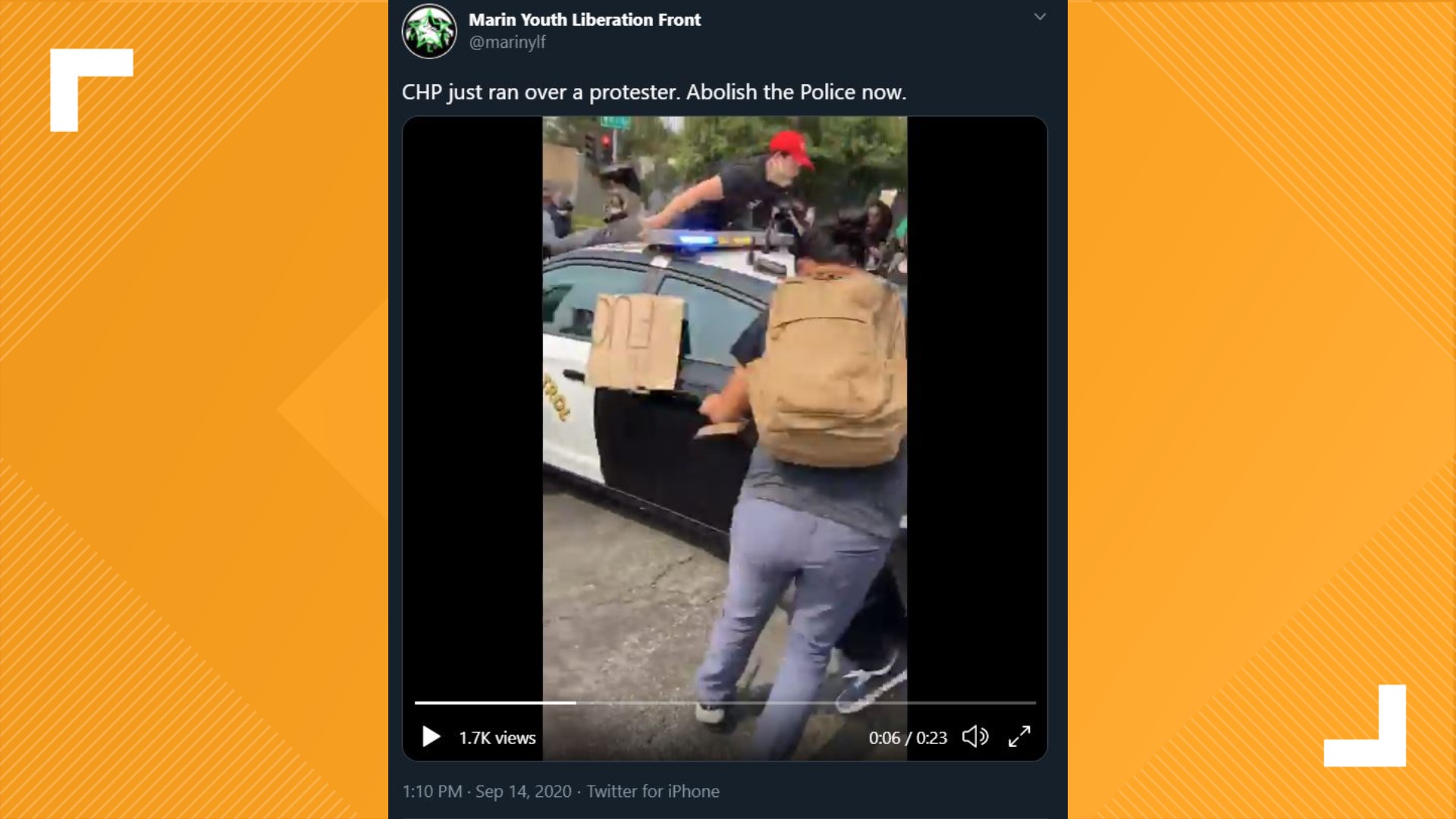 One video even showed a protester climb onto the hood of a California Highway Patrol (CHP) vehicle. The CHP officer accelerates away throwing the protester onto the pavement.

President Trump landed at McClellan Airport on Monday to receive a briefing from state officials on explosive wildfires burning statewide. During the event, hundreds of people could be seen surrounding the area, with a majority of those gathering were President Trump supporters.

ABC10's Kevin John said, for the most part, the protesters were peaceful. However, following the president's appearance, multiple videos on social media show anti-President Trump protesters antagonizing drivers, only to then have to jump out of the way to avoid being hit.

One video in particular shows a light green Volvo swerve into the crowd before speeding away. Another video shows people block a CHP vehicle, only for the officer to attempt to drive away with a man on the hood of the car.

"We're human beings man. We're people. Honestly, our country is divided right now. You know what I'm saying? It's crazy because I’ve never seen it like this," said Lieutenant Coopwood.

Coopwood was passing by Watt Avenue and Airbase Drive and began filming as emotions ran high with dangerous interactions between drivers, protesters, the president's supporters, and even California Highway Patrol (CHP).

One officer, driving through the crowd, sped off. A protester who climbed onto the hood and was thrown off onto the pavement.

"First, I was like, dang that's messed up why did they do that? But now actually seeing the video from different angles, I kind of know why the cop did that. I'm not saying it's right or wrong, but for the safety of the cop, I mean, he had to get out of there because he was being mobbed," Coopwood said.

But Coopwood also says he understands why protesters were blocking the intersection – as a means to get their message front and center.

"Both sides were wrong. The cop was wrong for speeding up like that. He could have acted maybe a little less aggressively," he said.

Meanwhile, CHP officials say the officer, who was leading traffic control, feared for his safety and began to accelerate away when the protester climbed onto the hood. Medical aid was provided to the protester, who was transported to Mercy San Juan Medical center with minor injuries.

"The North Sacramento Area CHP is investigating an incident from earlier this afternoon involving a protestor and one of our patrol vehicles. Two CHP officers were conducting traffic control near the intersection of northbound Watt Avenue and Airbase Drive and attempted to leave the area.

As the lead vehicle began to pull away, one of the protesters climbed up the hood of the patrol vehicle. Fearing for his safety, the officer began to accelerate away and the protester fell off the vehicle.

Medical aid was provided and the party was transported to Mercy San Juan Medical Center with minor injuries."

California fire officials talk to President Trump about how they need a mix of forest management and science of climate change to fight wildfires.