The news about the verdict is spreading around the Sacramento area. 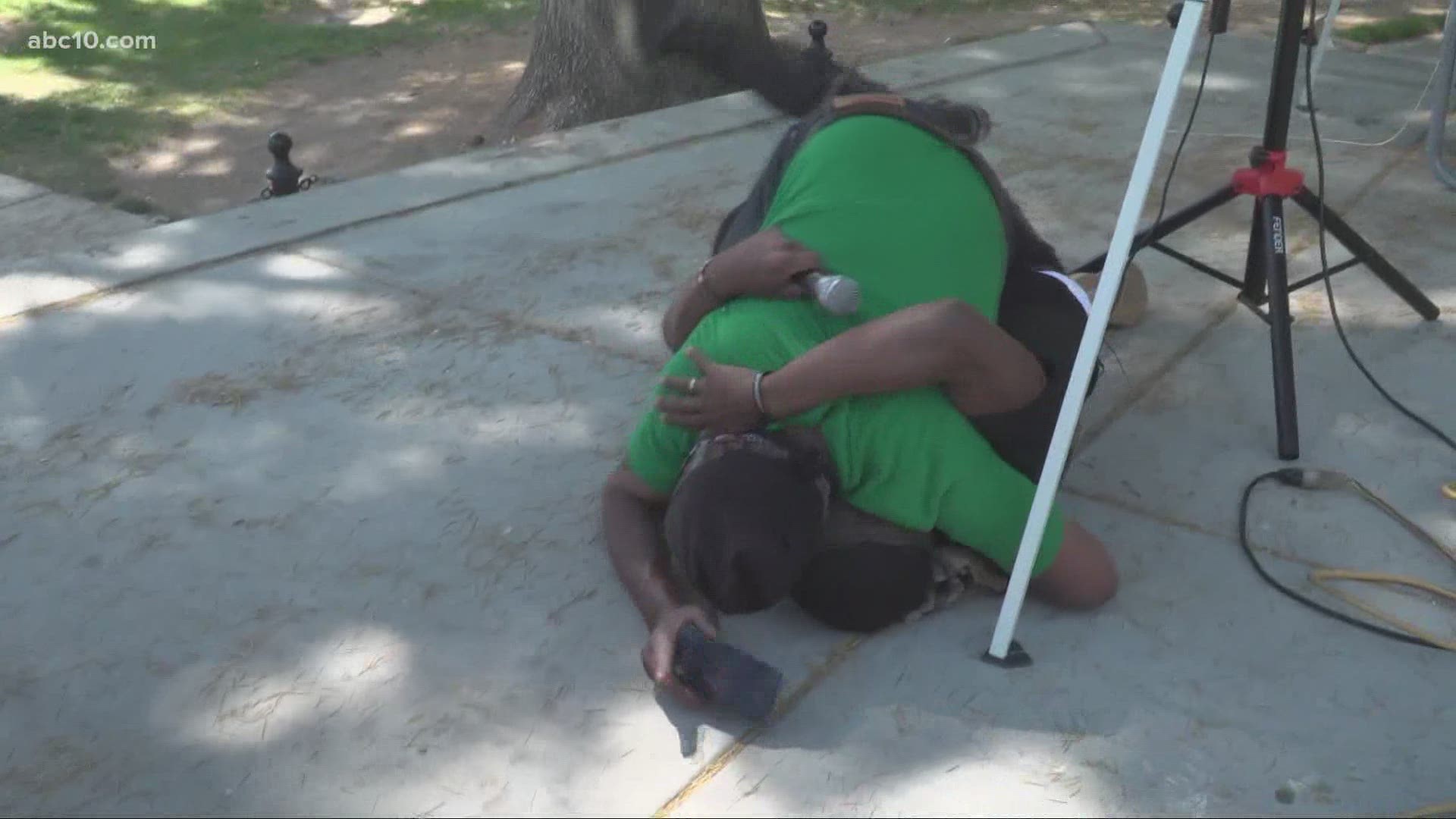 SACRAMENTO, Calif. — Stevante Clark, a Sacramento man whose brother was killed by police in 2018, fell to his knees in response to the verdict on the Derek Chauvin case.

Clark, a community activist, fell to his knees upon hearing the verdict. He said the news is a heartwarming moment for families impacted by police violence.

He said that his grandmother was in the hospital because the trial was too much for her and that his mom is out of town to get away from the commotion. Clark allowed ABC10's Brea Love to listen in as he told his mother the news.

Stevante just called his mom and let us listen. She said “Thank you Lord!” “Justice!” He said he’s happy because his mom is. @ABC10

“We won today.” I’m hearing from people in the heart of Oak Park today as the guilty verdicts were read for Derek Chauvin, a former Minneapolis police office officer, for the death of George Floyd. @ABC10 pic.twitter.com/zl802QNQvs

The verdict of the trial was playing in a coin-operated laundry room along Mack Road in Sacramento. The news grasped the attention of AJ Gill, an employee at the business.

He knew about the case and said that, as a person of color, he also knew about racism.

"When I knew about this case already, I already knew that it would be guilty at the very start, because it was very obvious," he told ABC10's John Bartell.

A ruling like this rarely happens and to watch it live while doing laundry was a surprise to some.

"I didn't think anything was going to happen, but I'm happy it did," Amanda Johnson, a laundromat customer, told Bartell.

“I am so happy. Finally, a cop got what he deserved,” she added.

Posting to Twitter, the Sacramento chapter of Black Lives Matter said the verdict is what justice should always look like.

This is what justice should look like every time!

Echoing a similar sentiment on Instagram, activist Berry Accius referred to the verdict as "accountability."

Damion Saunders, leader of Allies for Black Lives Placer County, said the anticipation of the verdict kept him on pins and needles for most of the day. When the guilt verdict came back, he said that he and his wife were in tears.

Over in Stockton, Bobby Bivens was all smiles, clenching his fist in celebration as the Chauvin verdict was read. Biven acts as the head of the Stockton NAACP chapter.

“I think that we finally got some justice of a black person being killed by law enforcement. I think we got justice that we have not ever received in America before,” Bivens told ABC10's Kurt Rivera.

For Toni McNeil of Faith in the Valley in Stockton, she said that she had never seen a police officer arrested in her life.

"When I watched him be handcuffed and taken into custody, all I could do is just scream. I just started screaming... it was a tsunami of emotions that overtook me," McNeil said.

Former Stockton mayor Michael Tubbs also sounded off after the verdict, noting that, while he believes it was the correct one, more needs to be done.

"Still, George Floyd’s murder was caused by systemic issues and will happen again without real structural changes," Tubbs said, in part, on Twitter.

The verdict was the correct one. Still, George Floyd’s murder was caused by systemic issues and will happen again without real structural changes.

“The verdicts rendered today in the George Floyd case send a clear message that justice belongs in the courtroom where the people determine responsibility, and those who violate the sanctity of the law will be held accountable,” Salazar said. “The People have spoken and we stand with the People.”

How one Sacramento activist is reacting to the Derek Chauvin trial