"The continued presence of this statue in California's Capitol, where it has been since 1883, is completely out of place today." 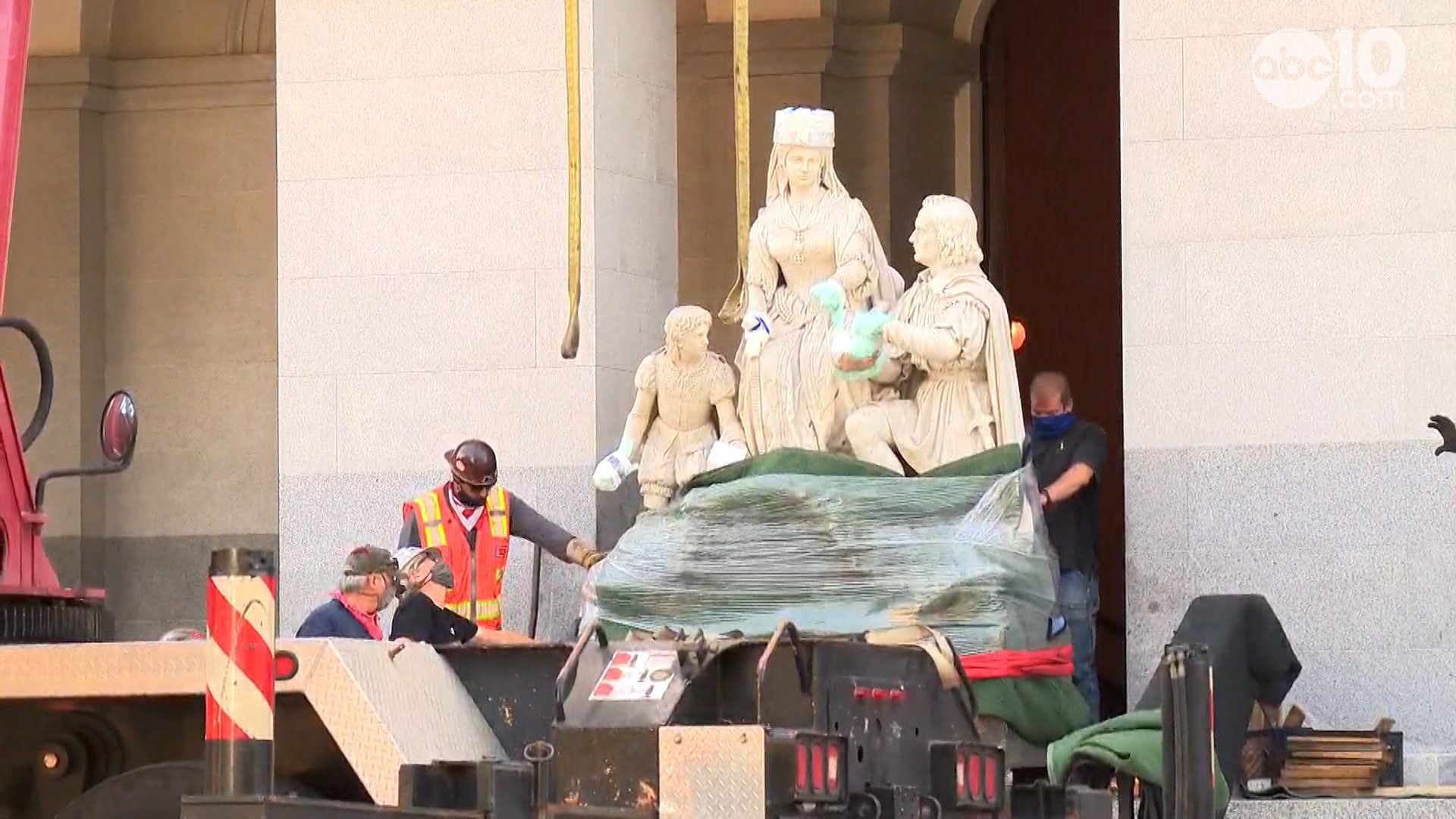 SACRAMENTO, Calif — The statue of Christopher Columbus and Queen Isabella was removed from the state Capitol's rotunda, Tuesday morning.

The statue, called "Columbus' Last Appeal to Queen Isabella," was removed exactly three weeks after lawmakers announced they would take it out of the Capitol building.

"Christopher Columbus is a deeply polarizing historical figure given the deadly impact his arrival in this hemisphere had on indigenous populations," a joint statement from state Senate and Assembly leaders said. "The continued presence of this statue in California's Capitol, where it has been since 1883, is completely out of place today. It will be removed."

The announcement came at a time when statues and monuments of Confederate officers were being vandalized, destroyed, and taken down by city and state officials nationwide.

"It's time for the story to be told," Dee Dee Ybarra, a Native American with the Statewide Coalition Against Racist Symbols said.

The statue was gifted to the state by Darius Ogden Mills, a banker who made his money during the California Gold Rush.

The monument depicts the moment Columbus received financing for his initial voyage that led him to the Americas for the first time. Columbus' voyages to the Americas led to the colonization of North America and the mass slaughtering of the indigenous tribes who had already lived on the lands.

"It didn't reflect our values to have someone on display that was so harmful to native populations," Katie Talbot, Press Secretary for Speaker Anthony Rendon said.

Ybarra says this has been a long time coming.

"We feel that hurt from our ancestors and until all these daily reminders of what happened to us are removed, we can't heal," she said.

The Columbus statue is the latest controversial monument to be removed in Sacramento. A statue of California colonizer and Sacramento founder John Sutter was removed from in front of Sutter General Hospital by the medical company.

Over the Fourth of July weekend, protesters tore down a statue of Father Junipero Serra. Serra was a priest who led the development of the California mission system in 1768, according to the Capitol Hill Museum. The statue had been in the Capitol Park since 1965.

Also over the holiday weekend, vandals targeted the “El Soldado” monument in Capitol Park, spray painting vulgar messages on the statue honoring fallen Mexican-American soldiers. The statue has been at the State Capitol since 1990.

"Columbus was out to conquer the world, he did enslave people as he went along and that was kind of the imperialist attitude, we're a representative of the King, we're better than you are," Marcia Eymann, the Sacramento city historian said. "That's what Junipero Serra stands for, Sutter and particularly Columbus."

Eymann says the statues were all over but the majority of the general public never really thought to question them.

Ybarra says this is a step in the right direction, but the next step is seeing a change in history books.

"I just hope it's real, I hope it's over, I hope things change in the school books," Ybarra said.

WATCH ALSO: Will there be a second stimulus check? | Dollars and Sense