Advance Peace will target the city's young men at highest risk of committing gun violence. It will put about 50 of them at a time through an 18-month intensive program, providing mentoring, job skills and hope - proponents say - for a future. 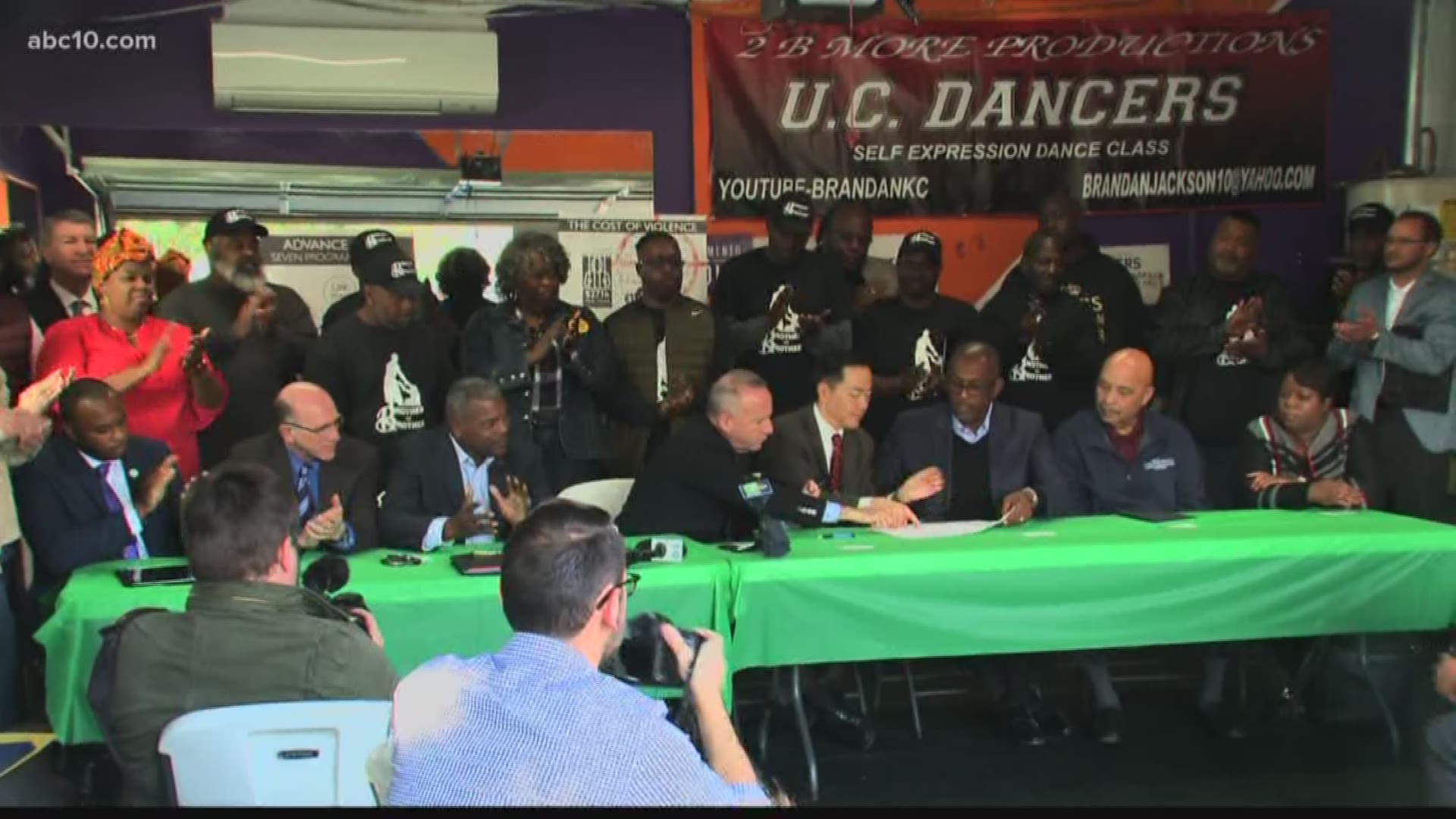 It's official: Sacramento is the nation's first pilot city for the controversial "Advance Peace" program, aimed at reducing gun violence.

Advance Peace will target the city's young men at highest risk of committing gun violence. It will put about 50 of them at a time through an 18-month intensive program by providing mentoring, job skills and hope -- proponents say -- for a future.

"It is patently obvious that we are not going to arrest our way out of gang shootings," Sacramento City Council member Larry Carr said. "Advance Peace offers an innovative approach to helping would-be violent individuals choose a different path."

Everybody gathered at the Mack Road Valley Hi Community Center Monday afternoon for the contract signing was buzzing with excitement about the new program.

The program has its critics as well, however, and Sacramento County Sheriff Scott Jones is one of them.

He has said he has "fundamental objections to this program"and that he's against "any money being paid to people just to NOT commit crimes."

The program, in part, offers participants a monthly stipend of $1,000 -- for up to nine months -- after they successfully complete half-a-year of the 18-month program.

Sacramento City Manager Howard Chan clarified that money is not coming from taxpayers.

"Our agreement expressly prohibits Advance Peace from using any city funds for these stipends," he said at Monday's signing. "Instead, they will be funded through Advance Peace directly and their foundation partners."

The city is committing $1.5 million over the course of four years, with Advance Peace matching that through private donations.

The program began in the Bay Area-city of Richmond nearly a decade ago, and Sacramento will be the first city to officially adopt the model.

The founder of Advance Peace, DeVone Boggan, wants to expand the program to urban communities nationwide, and he said he hopes Sacramento is the successful start of that.

“Sacramento is our pioneer city on our effort to expand the Advance Peace strategy," he said. "We are excited about this partnership and commitment to interrupt gun violence while transforming the lives of those that are at the center of this issue."

The pilot program will begin ramping up immediately, with participants - also known as "fellows" - enrolling by this spring.

"Over the course of four years, two groups of some 50 young men will be identified and approached by members of their community to sign on to be Advance Peace fellows," the media release said. "The Advance Peace organization has committed to a reduction of 20-25 percent in gun violence by the completion of the program by the first group of participants."

Freddie Dearborn is currently a gang intervention specialist and youth mentor with local group Rise Up.

"I actually come from the background and did a lot of damage myself, so I'm trying to fix some of the stuff I've created and I want to push forward," he told ABC10 News at the signing, which he attended. "I just don't want to see none of these kids get hurt and have a downspiral in their life, and I'm here for an outlet to help them turn the right direction."

He'll be one of the Advance Peace mentors.

"There have already been 36 gang-related killings in the city this year alone," Steinberg said, "and over 1,000 gun-related charges filed over hundreds of incidents."

As a father of two sons, Dearborn wants a community free of gun violence.

"I want (my 9-year-old boy) to be able to walk to school and come out and play without worrying about gunshots or somebody jumping on him just because he looks a certain way or he's wearing a certain color," Dearborn said, adding his sons aren't involved in gangs. "I want him to be safe, as well as the other kids in the community."

His other son, 19, is enrolled in the Sacramento Police Academy.

"And I had a daughter just graduated Arizona State, so everything's going good," he said.

He wants to give others in this current generation of young people a shot at a future, too.

"I feel like if there was a type of program that this is during when I was growing up, I probably wouldn't have took some of them roads I took," he said. "Gun violence is gun violence. The end result is either death or prison, so I'm just trying to make sure that there's other opportunities and outlets for these young kids in this generation to take, other than violence."

The city voted to approve contract negotiations with Advance Peace in August.