'The city blew us away with how generous they were' | Crest Theatre raises more than enough to cover vandalism, now eyeing eventual reopening

With over 600 people donating to the cause, general manager Robert Avila says the theater can afford the fixes it needs. 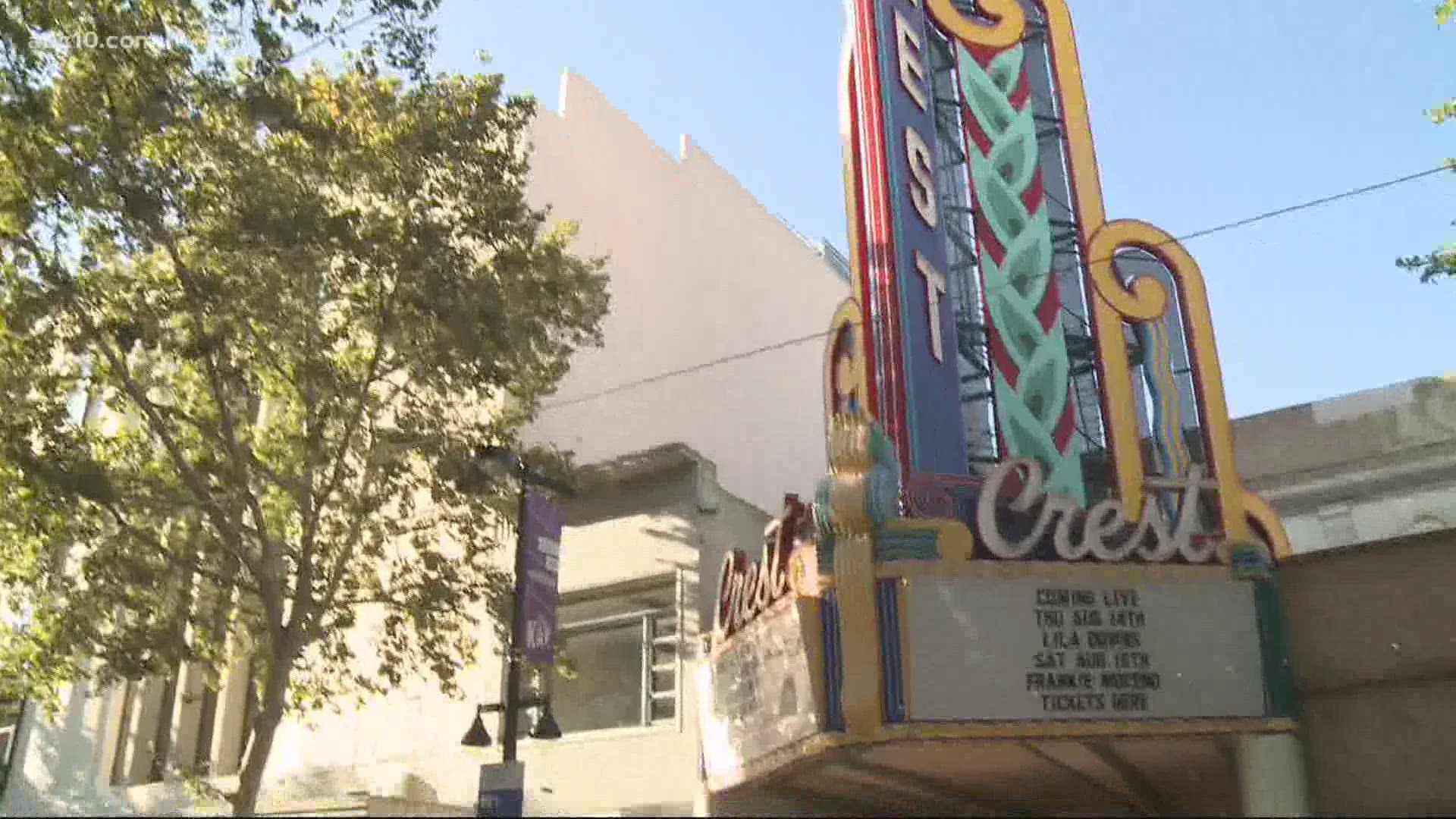 SACRAMENTO, Calif. — After the historic Crest Theatre in Downtown Sacramento was vandalized this past week it was able to raise enough money for repairs all without showing a single movie inside the theater.

The theaterturned to GoFundMe to raise more than $26,000 for repairs.

"It's humbling is what it is, because I understand that no one's having a fun time with where we're at with the virus… So, for people to think about us, it is incredibly humbling," Crest Theatre General Manager Robert Alvis said.

The theater has been closed since March 15 because of the coronavirus pandemic, except for about 10 days when theaters were allowed to open with social distancing, Alvis said.

A staple on K Street since 1912, the theater was previously known as Empress Theatre. These days, the original name lives on in Empress Tavern, a restaurant that operates in the basement of the theater.

It was Empress Tavern employees who first noticed the significant damage to Crest Theatre's front doors, and called Alvis to check it out, he said.

"I didn't know what I was going to walk into because when I heard that windows are broken that, to me, means that people could walk right into the venue with nothing to stop them," Alvis said.

Alvis said that the gate that protects those doors was destroyed. The doors, though cracked beyond repair, were not opened, meaning no one had gotten inside.

Alvis said that the vandalism was just an instance of "wrong place, wrong time," for Crest Theatre.  The theater does not have exterior security cameras that could have captured the vandal, so Alvis said he chose not to file a police report.

"The doors are pretty expensive, but, you know, it's all starting to add up pretty quickly," Alvis said.

Credit: Robert Alvis
Close up of the smashed door.

Besides the smashed doors and broken gate, the theater was victim to graffiti in a previous incident. Despite deciding to wait to clean up the markings, this recent act of vandalism meant more immediate repairs were necessary.

"Where originally we're like, 'Okay, well, we'll deal with that little graffiti once we're reopening,'" Alvis said. "Now we're kind of to a point where we have to start jumping on these repairs because the building's just in worse and worse shape all the time."

On Thursday morning, a GoFundMe page was created to raise money for the repairs.

The fundraiser was shared on Crest Theatre's Facebook page, and was then shared on Reddit, spreading the word to the greater Sacramento area online.

"The city blew us away with how generous they were," Alvis said. "We've reached our goal, and in less than 24 hours."

More than 680 people have donated on the GoFundMe page.

"People are still giving," Alvis said. "Anything now that's over the amount that we need for all the repairs, we're gonna put towards reopening."

As Crest Theatre waits to reopen, t-shirt sales and virtual screenings have been some of the only sources of revenue these last few months.

"Every dollar counts," Alvis said. "You know, every dollar helps keep the lights on, or pay our hot water bill, or help us with the rent. Every dollar will be used to help us cover costs while we're closed."