The vigil for Mary "Kate" Tibbitts encouraged people to remember her for who she was and not how she was taken. 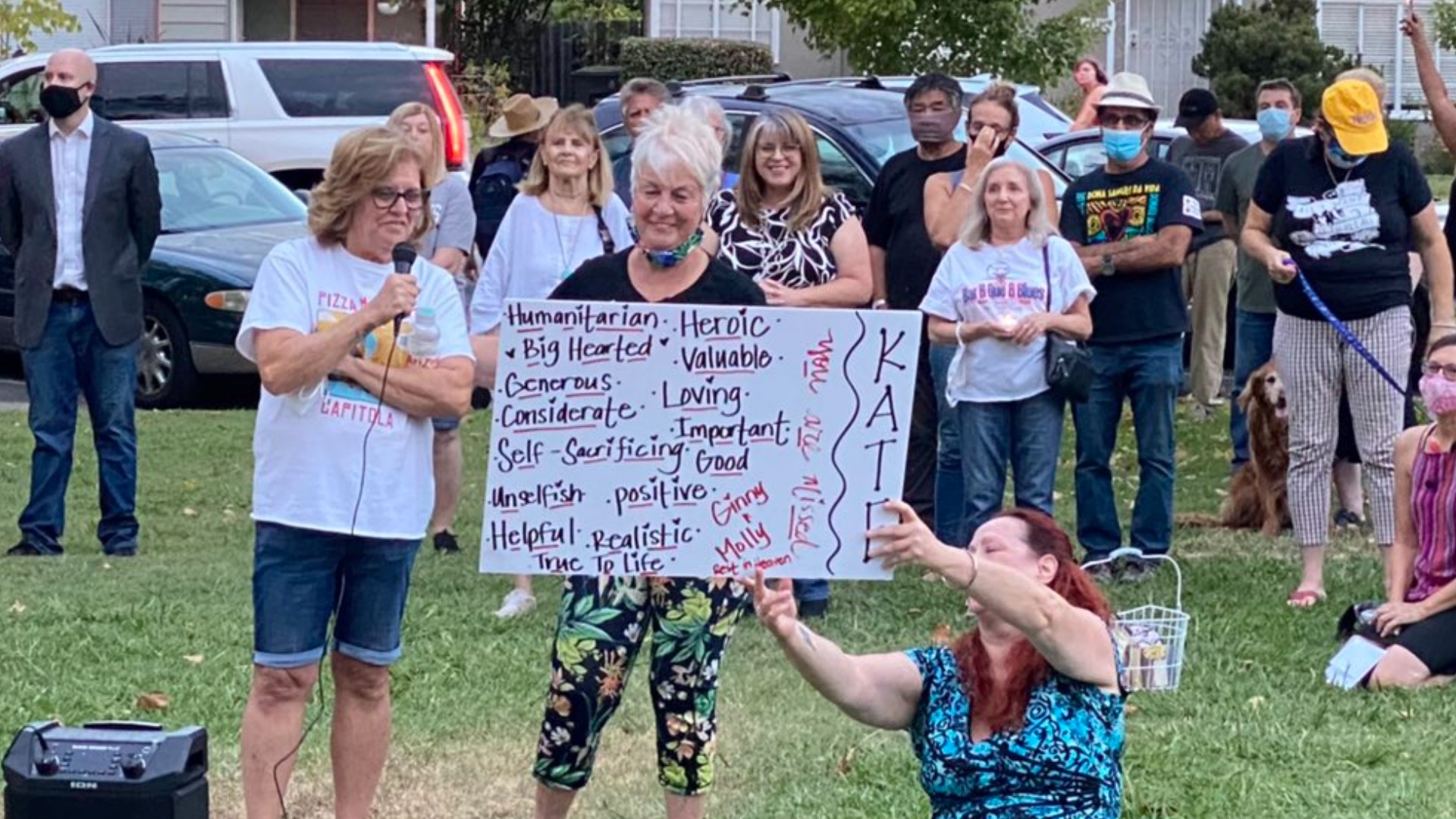 SACRAMENTO, Calif. — A neighborhood vigil took place in Land Park to remember the life of a loving sister, daughter and a "fiercely loyal friend and neighbor" named Mary “Kate” Tibbitts, 61.

"She will always be missed," said Dan Tibbitts, the victim's brother.

The vigil comes after Mary Tibbitts and her two dogs were killed in Land Park last week. More than 100 community members, family, friends, and neighbors attended the somber remembrance at Plaza Cervantes Park in Land Park.

Community members Thursday expressed outrage, fear and frustration during the vigil, but held back, saying there will be a time and place in the future to share. Many were urged Thursday to remain focused on remembering Tibbitts for the remarkable life she lived.

“We are all outraged at what happened. We will talk about the outrage another day," said Dan Tibbitts. "Today, we are here to honor my sister.”

Dan Tibbitts, the brother of Kate Tibbitts, the woman slain in Land Park Saturday, shares more about his sister known for volunteering in many ways for her community. @ABC10 pic.twitter.com/PZLAAOcO3i

“I just don’t want this to happen again," Baker said. "It didn’t need to happen, it could have been me in that house.”

Sacramento Mayor Darrell Steinberg lit a candle at his home Thursday night in honor of Tibbitts and to provide a space for the community to grieve and celebrate her life, according to a city spokesperson

While headlines have put Tibbitts name into the spotlight as a homicide victim, the Sacramento Society for the Prevention of Cruelty to Animals encouraged people to remember Tibbitts as she lived and not as she was taken. On Facebook, they said she was a 25-year volunteer for the shelter.

“Long-time staff and volunteers will remember her for making sure each dog she encountered received the best care possible. In addition to being a cashier for our book sales, she volunteered at the annual Doggy Dash as the vendor check-in lead. In her ‘spare time,’ she transported animals to our rescue partners whenever and wherever she could,” the shelter said.

The suspect in her killing was identified as Troy Davis, 51, who had two felony strikes and was released from jail without having to post bail in June. He had a known issue with methamphetamine, according to city officials.

Tibbitt’s family spoke out publicly for the first time Wednesday since her death. In a statement to the Sacramento Bee, they said they feel Davis’ release demonstrates a monumental failure of the state’s political and criminal justice system, adding:

“Our only hope is that it won’t take years for the citizens of the state to wake up and realize that we have the ultimate power to insist on changes to laws, and the people who implement them, to effect reforms that are so badly needed to protect ourselves from the evil that exists amongst us.”