California Highway Patrol, the National Guard and Sacramento law enforcement are monitoring the Capitol and Sacramento area in anticipation of violent protests. 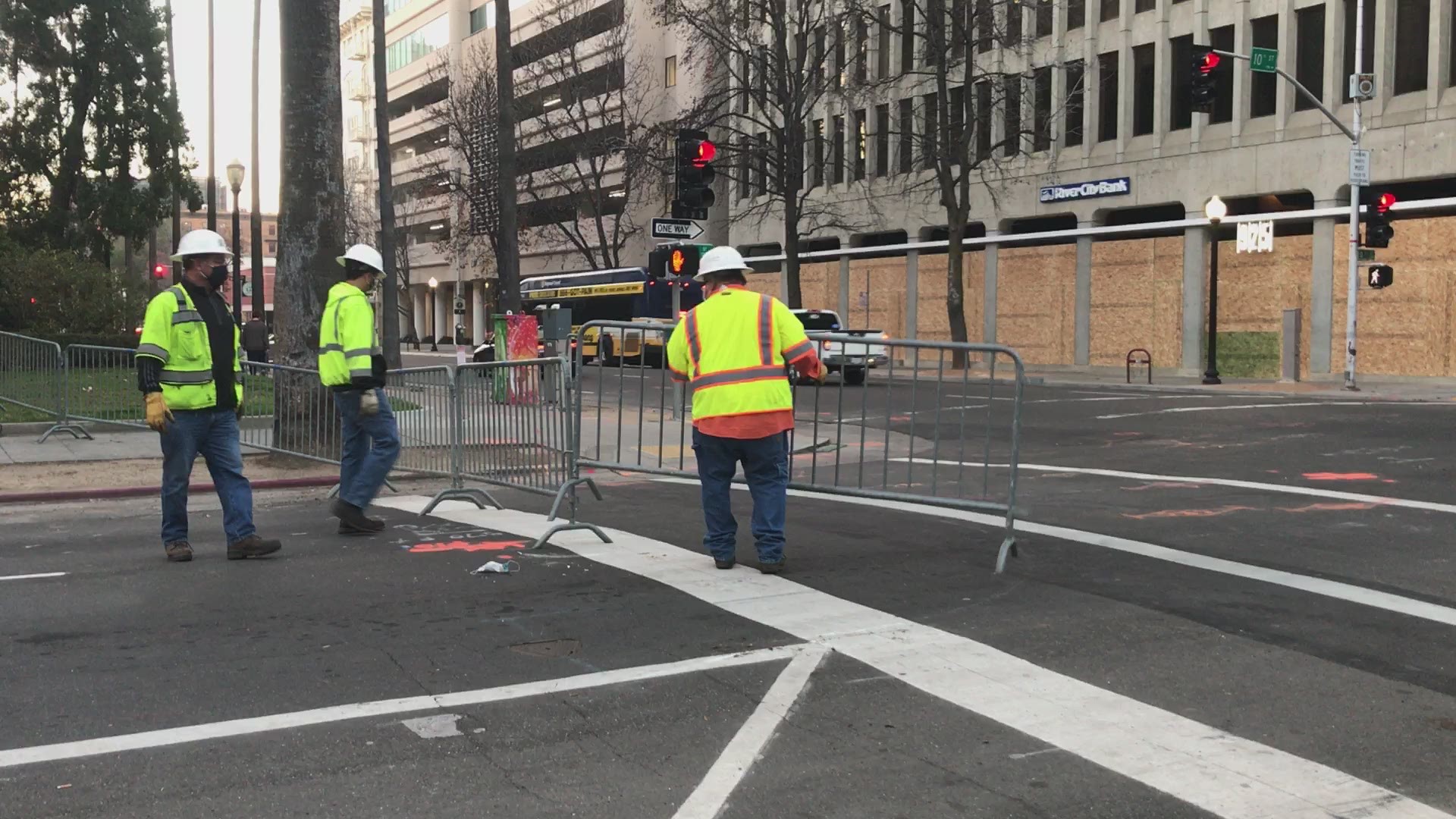 SACRAMENTO, Calif. — Law enforcement prepared for demonstrations at the California State Capitol in Sacramento over the weekend.

Some 10th Street barricades come down

Some barricades along 10th Street are getting removed from the area and opening up the roadway to traffic.

The barricades were put in place to help with any potential protests, but on Sunday, they saw little use.

After 5 p.m., workers started moving those barricades, and the roadway is expected to open to traffic for the rest of the night and tomorrow.

Sacramento Police Department also reduced the number of officers around the area, however, the California National Guard and California Highway Patrol are still in the area.

"Maybe we don’t need such a heavy presence, but there is an eminent threat so I get it," said Matt Cabrera, a Sacramento local.

Despite a massive presence of law enforcement presence and California National Guard, the vibe around the California state Capitol seems akin to any other weekend for now.

“I expected to come out here and see a crowd like some Trump supporters. I don’t see anything. It’s slow," said Jiff Hillaman, supporter of President-elect Joe Biden out in front of the Capitol.

Preparations were made in anticipation of a potential protests and large crowds, such as surrounding the Capitol in chain-link fencing. However, Sunday at the Capitol continues to be a quiet day.

Barricades that were set up to keep dueling protests separate have not seen a lot of use.

Law enforcement tells ABC10 that they'll be at the Capitol throughout the night just in case and incident does occur.

Quiet at the Capitol

Despite a quiet Sunday so far, law enforcement continues to prepare for any potential protests at the state Capitol.

Sacramento Police Department said no active demonstrations are going on at this time. Around the downtown and surrounding areas, law enforcement are staying alert and continue to have a large presence.

Airbnb announced they are canceling reservations for people that they find to be associated with a "violent hate group," according to an Airbnb spokesperson. The company cited safety concerns and increased law enforcement related to the presidential inauguration on Wednesday.

The booking company said that they will not only cancel the reservations, but ban those people from Airbnb if they violate community policies that prohibit violence and participating in criminal activity.

Airbnb is in contact with local law enforcement to identify people "who may present a risk of violence such as members of violent hate groups" and "others publicly confirmed to have been responsible for the violent criminal activity in the U.S. Capitol Building," said the spokesperson. The company wants to make sure hosts, guests and the community is safe.

Sacramento Police shut down 10th Street between L and N streets to vehicle traffic in preparation for possible protests on Sunday. If people are driving in the area, they are encouraged to find alternate routes.

Several law enforcement agencies are at the California Capitol in Sacramento to secure the area in anticipation of any violent protests.

While there were no threats on Saturday, law enforcement is still staying on high alert. A handful of peaceful protesters showed up throughout the day, but other than that, the Capitol grounds remained largely quiet.

Sacramento Police said on Twitter Saturday that although there were no active demonstrations, there could still be some throughout the upcoming week.

"There are no active demonstrations at this time, however, in preparation for any demonstrations that may occur throughout the week there will be a continued large law enforcement presence downtown and in some surrounding areas of the city," Sacramento Police said.

There are no active demonstrations at this time, however, in preparation for any demonstrations that may occur throughout the week there will be a continued large law enforcement presence downtown and in some surrounding areas of the city. pic.twitter.com/jiorbugui1

The California Highway Patrol (CHP) went gone on “tactical alert” on Friday ahead of the Presidential Inauguration of Joe Biden next week.

A statement from CHP read, in part, “Due to the potential for civil unrest related to the 2021 Presidential Inauguration, I have placed uniformed CHP personnel on tactical alert for an indefinite period. This allows for the maximization of resources to protect public safety as well as state buildings and infrastructure. The CHP will continue to monitor the situation and plan our resources accordingly.”

The FBI's Sacramento Field Office said Friday  they're both concerned and prepared for potential armed protests at the California Capitol over the weekend and leading up to Inauguration Day and they're taking appropriate precautions.

"[There's been] some terminology like 'storming' the capitols, so that's what we're concerned about is not people protesting, not people coming out to express their beliefs, views and freedom of speech," Sean Ragan, Special-Agent-In-Charge of the FBI Sacramento Field Office, said Friday. "It's anybody that's going to try to hijack that protest, so to speak, in order to commit violence. So we're concerned about that, we're preparing for that."

Ragan said his office set up a command post Friday, something not typically done for the many protests and unrest seen throughout 2020, so they can bring in law enforcement partners and share information in real time to ensure all agencies are aware of what's going on "from a criminal activity or violence perspective."

An FBI bulletin that went out following the uprising at the United States Capitol warned law enforcement of potential armed protests at all 50 state capitols.

The permit was requested by Chris Bish, who listed the event as "Let Freedom Ring" and was described as an event to "peacefully protest our compromised election." It listed 3,000 attendees.

CHP said they denied the permit because "because the proposed number of attendees are more than are being allowed as a result of COVID-19 and due to the potential for civil unrest this weekend."

Bish was defeated by Rep. Doris Matsui in the Nov. 3, 2020, state election for Matsui's District 6 seat.

The Yolo County Transportation District, in partnership with Sacramento Regional Transit District [SacRT], announced that they are aware of potential protests in Downtown Sacramento this weekend through the presidential inauguration.

Because of potential street closures between Saturday, Jan. 16, through Wednesday, Jan. 20, they're encouraging riders to limit travel to downtown. In a press release, Yolo County Transportation District said it is prepared to pull Yolobus service if "events warrant such, until such time that streets are re-opened and it is safe for our services to be on downtown Sacramento streets again. In this event, Yolobus service will be available to/from the West Sacramento Transit Center, using the bus stop at Tower Bridge Gateway at Sutter Health Field."