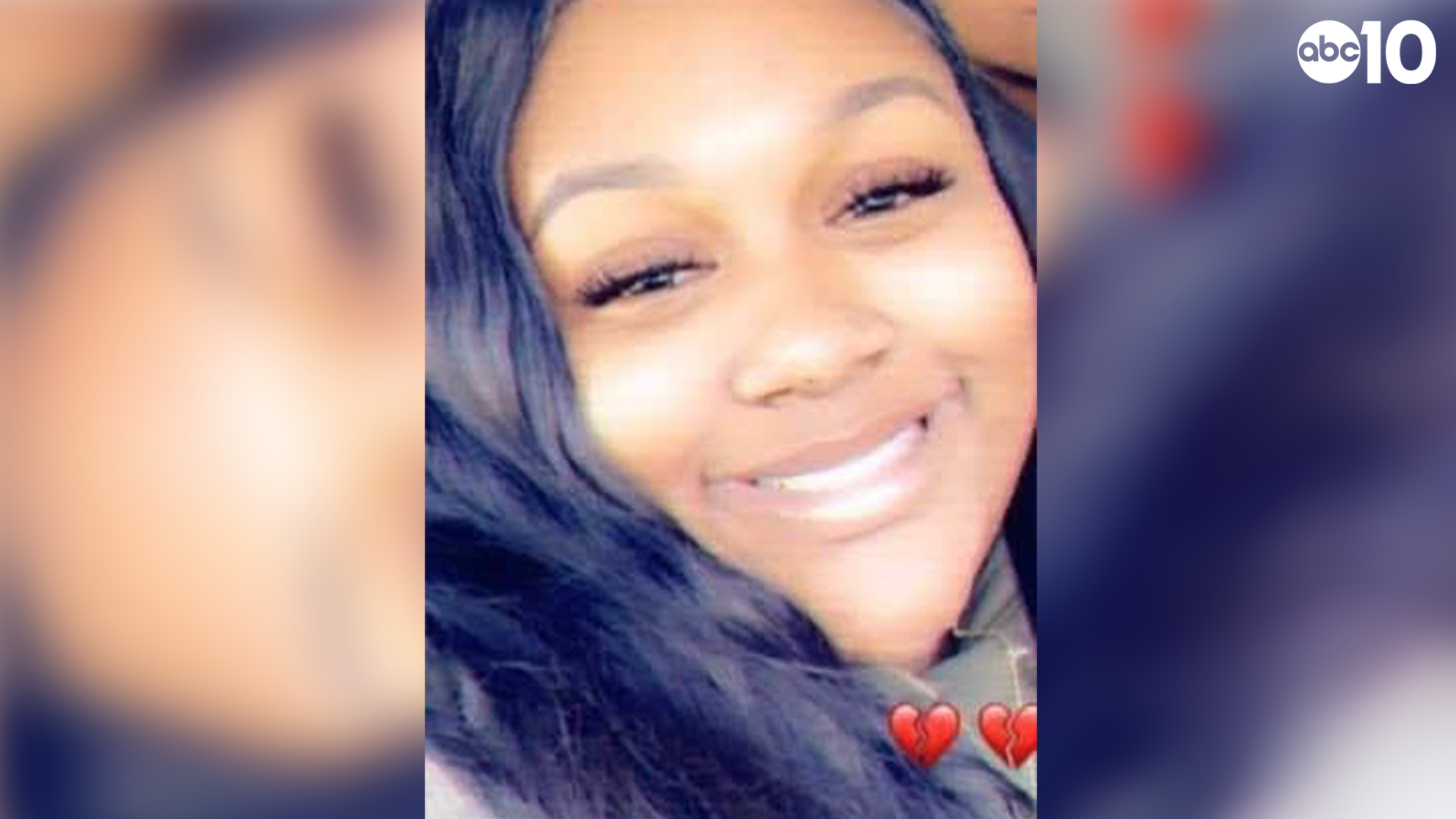 Chiffon Buckner said she lost the love of her life when she learned her daughter Taylor Blackwell, 19, was found dead in a room at WoodSpring Suites Sacramento on February 28.

“I just need answers. I need to know what happened to my baby," Buckner said.

The mystery behind her daughter’s death is beginning to go viral on social media.

The incident hadn’t been posted to the Sacramento Police Department’s website or Facebook page as of July 3. Sacramento police spokesperson Sgt. Sabrina Briggs said the department does not post information on every death investigation, but they did describe what happened during their initial response to the scene.

Officers went to the 7700 block of La Mancha Way in south Sacramento near Mack Road after fire department personnel found a dead woman in a room, according to the Sacramento Police Department. The woman was later identified as Taylor.

Homicide detectives and the Sacramento County Coroner’s Officer responded to take over the investigation, according to police. Crime scene investigators also responded to collect evidence and document the scene.

“This is still an open and active death investigation. The Sacramento Police Department is still working with the Sacramento County Coroner’s Office in this case,” Sacramento police said in a statement emailed to ABC10.

Credit: Chiffon Buckner
Taylor Blackwell, 19, was found dead at WoodSpring Suites Sacramento on Feb. 28. Her mother Chiffon Buckner has been searching for answers ever since.

Still, Buckner said she hadn’t spoken to the police detective originally assigned to the case since April. She said she spoke to the coroner’s office around the same time and was told it could take three months for her daughter's cause of death to be determined.

ABC10 reached out to the Sacramento Police Department and the Sacramento County Coroner's Office to inquire about Taylor’s case. Soon after, Buckner received a couple of calls.

"Someone called me from the coroner's office and said that from the very beginning they've been investigating Taylor's death in the same way they would investigate a homicide because it's considered a suspicious death," Buckner said in tears over the phone Friday afternoon. "I wasn’t prepared for her to tell me that. It felt like somebody kicked me in my gut. I had no idea that’s what the lady was about to tell me."

Then, around the same time as her conversation with the coroner’s office, Buckner said she received a call from a new police detective on her daughter’s case.

“Prior to this going viral, nobody was calling me. I haven’t gotten a call from anyone since my daughter passed,” Buckner said. “The woman from the coroner’s office said, ‘I’m so sorry. The detective should have told you.’ I should have been informed a long time ago. I am her mama!”

“She was my everything.”

Buckner described her daughter as funny, extremely smart and very loving. Taylor was a 19-year-old psychology major at Sierra College and vice president of the Black Student Union. Her mother said Taylor loved her Black people and Black culture and planned to transfer to Texas Southern University, a historically Black university (HBCU) in Houston.

“She was so passionate about life. She had so many plans, Buckner said. “It’s so hard for me to believe she’s gone. I don’t know how I’m supposed to live my life without her.”

Buckner said the week before her daughter’s death, she learned that a man Taylor connected with on Instagram showed up at Taylor’s job unannounced and uninvited.

Wanting to know more about the situation, Buckner said she asked her daughter about the man.

“I don’t even know him. I’m not dealing with him,” Buckner recalled her daughter saying.

“I took her word for it,” Buckner said.

Buckner said her daughter went to the movies on the last night of her life. She thought her daughter was at the theater with a friend but found out after Taylor’s death that she was actually on a date with the man they had previously spoken about.

Buckner said Taylor brought her dinner after the movies and assumed she went straight to her room, but she later received a text from Taylor saying that she was going to stay the night with her best friend.

The next morning she awoke to her niece banging on the front door.

Her niece received the news from a family friend in Georgia who told them that a post about Taylor was circulating online.

“She said someone had put my daughter’s ID picture on social media asking if anybody knew who her family was and that she had been found dead at a hotel,” Buckner recounted.

The family friend gave Buckner a telephone number for a young lady who worked at the WoodSpring Suites Sacramento located at 7789 La Mancha Way.

“She said a coworker sent her Taylor’s ID picture telling her that she had just been found dead at the hotel,” Buckner said. “But she hadn’t got to work yet, so she sent the picture to social media. It got all the way to Georgia, then back to my niece and that’s how we found out.”

Buckner said she contacted the police, but they said they didn’t have any information on her daughter. She, along with family and friends, went to the WoodSpring Suites Sacramento. When they arrived looking for answers about Taylor, they were told her death was just a rumor, Buckner said.

The grief-stricken mother was skeptical.

“We sat there for hours. They put police tape up and sent out their chaplain,” Buckner remembered. “It’s a rumor, but you sent a chaplain?”

She said officers eventually took her to the police station on Freeport Boulevard.

“They drove me there just to tell me they believed it was her according to a photo on file at the hotel,” Buckner said.

When Buckner asked to see and identify her daughter’s body, the deputy coroner told her she wouldn’t be able to see Blackwell until her remains were released to the funeral home.

“We don’t generally let family come in and identify a body. It’s usually done by some scientific means...and in this case it was done by fingerprint,” Sacramento County Coroner Kimberly Gin said.

Buckner said detectives told her that the man Taylor was with that night left the hotel room at some point. They said he later returned to the hotel with another woman and found Taylor’s body when they went back to the room, according to Buckner.

The man and woman apparently tried to help Taylor but were unsuccessful, Buckner recalled the detective saying.

“They were interviewed and released,” Buckner said. “[He said] at this point it’s just a suspicious death and it could be ruled as anything from an accident to a homicide.”

Sacramento police officials would not confirm Buckner’s recollection of the information detectives provided her.

“This is still an active investigation, and to protect the integrity of the case we are unable to provide further details at this time,” Sgt. Briggs said in an email to ABC10.

“None of this makes sense to me.”

Overwhelmed with grief, Buckner said she couldn’t bring herself to view her daughter’s body prior to the funeral service. She said she didn’t see her daughter again until the day of her wake, which was three weeks after she was found dead.

When she finally saw Taylor’s body, she said she was unprepared for what she saw.

“The detective said there was no blood at the scene, so I’m thinking she wasn’t physically harmed and that there was no foul play here,” Buckner explained. “Then I go to the wake and I see her lips busted, a gash on the bridge of her nose, bruises on her face. Her arms had to be covered because they were so bruised up.”

Buckner said after seeing her daughter’s appearance, she started to believe someone harmed her “baby.”

“I can’t fathom anyone wanting to harm my daughter, and that’s why with everything in me I want to believe this was an accident… but none of this makes sense to me,” she said.

Buckner said she became discouraged when the detective originally assigned to the case told her she “may not ever know what happened to her daughter.” She also said the coroner’s office is past the three month window they told her it would take to determine the cause of death.

“I’m just exhausted on every level: mentally, physically and emotionally. I don’t know what my rights are regarding her investigation,” Buckner said. “I feel like they don’t care about my baby.”

Gin said for cases like Taylor’s, her office usually takes four months to complete its death investigations. She said the autopsy was done in March and the report should be coming back shortly.

“We’re still working on this and we’re treating it carefully, which is normal for something like this,” Gin said. “She may not receive an autopsy report if we rule it’s a homicide. By law, we can’t give it out until the suspect is adjudicated.”

The Sacramento Police Department said detectives conduct an investigation into the incident based on the coroner’s findings, which is why there have been few answers regarding Taylor’s death.

Buckner said the coroner’s office called her Friday and said that her daughter’s autopsy results would be expedited, but they didn’t provide a timeline.

The Sacramento Police Department encourages any witnesses with information about Taylor's death to contact the dispatch center at 916-808-5471 or Sacramento Valley Crime Stoppers at 916-443-4357. Callers can remain anonymous.

Credit: Chiffon Buckner
Taylor Blackwell, 19, was found dead at WoodSpring Suites Sacramento on Feb. 28. Her mother Chiffon Buckner has been searching for answers ever since.

Young people have accounted for 70% of new coronavirus cases recorded in Sacramento in the last few weeks, health officials said.