Wide Open Walls doesn't happen until August, but this new mural is debuting now to mark a special date. 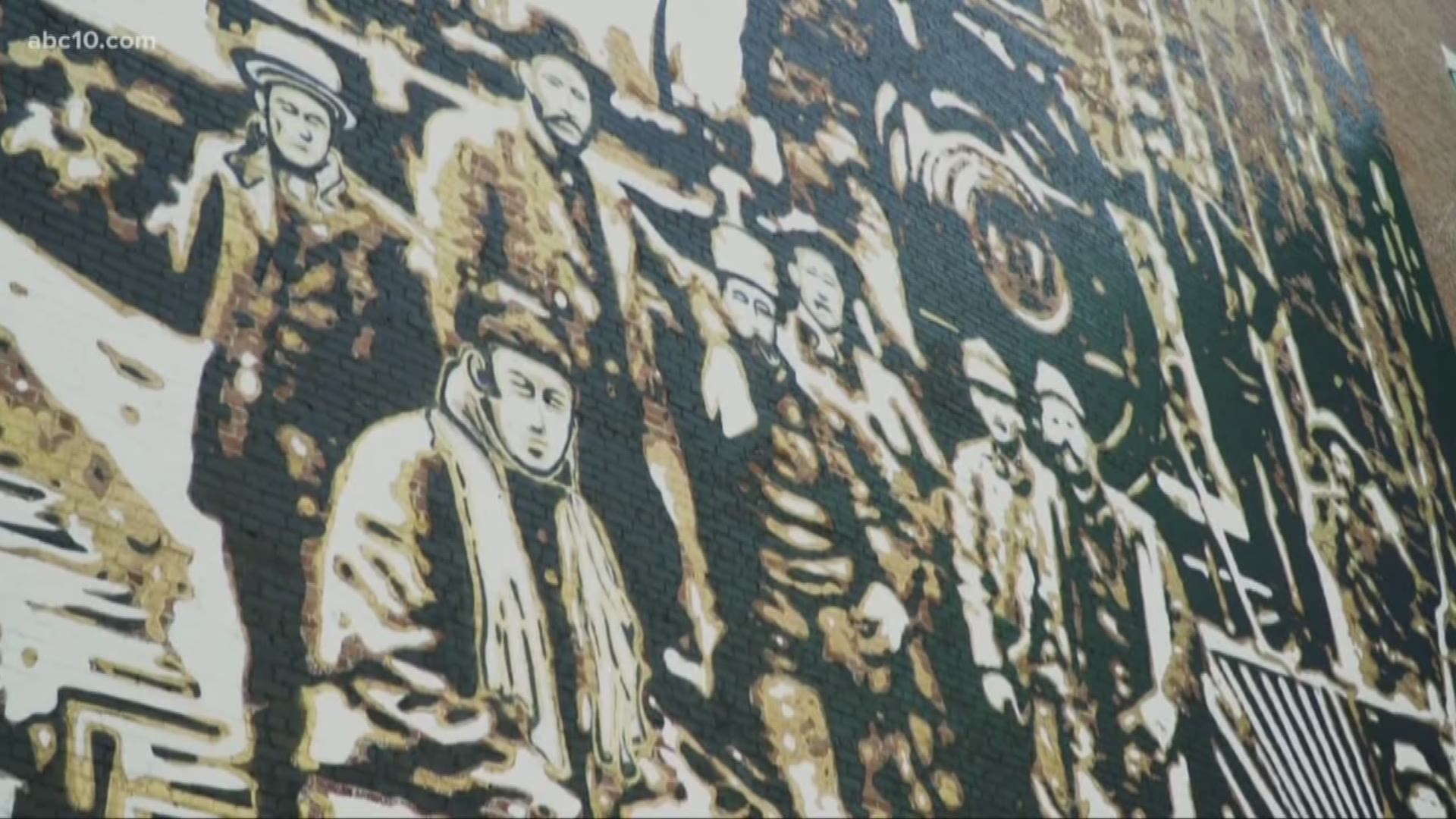 SACRAMENTO, Calif. — A new mural unveiled in downtown Sacramento Monday pays homage to the thousands of Chinese immigrants who helped build the Transcontinental Railroad, which marks 150 years this month.

The six-story-high, half-block-wide mural is on the east side of the Elks Tower Casino and Event Center, viewable along J Street, between 11th and 12th streets. It joins three other murals watching over the parking lot.

Maren Conrad designed and painted the mural, along with her team. Conrad is also the artist behind a number of other now-famous Sacramento murals, including Lady Bird at 16th and I streets; the Wishing Wall along 19th Street, between H and I streets; and the koi fish mural on the side of the MARRS building on 20th Street.

Conrad and her team completed this new mural in seven days, working almost around the clock.

"This is absolutely the most intricate, complex, hardest piece of art that I've achieved up to this date. I need a three day nap right now," she said with a laugh.

Conrad said her newest mural is a chance to depict history accurately.

"It took quite a bit of research and effort to find something that actually had both European and Chinese workers working on the same rails,” she said.

David Sobon is the founder and producer of Wide Open Walls, an annual event that has given Sacramento 90 permanent murals. Wide Open Walls doesn't happen until August, but this new mural is debuting now to mark a special date.

"We came up with an idea to celebrate the 150th anniversary of a railroad with a mural on this building,” he said.

The Transcontinental Railroad was completed 150 years ago, in May of 1869, with two railroads meeting at Promontory Point, Utah.

However, noticeably absent from the famous photo of the event is any trace of the thousands of Chinese immigrants who built the railroad.

Sacramento’s new mural, on the other hand, depicts both white and Chinese workers together.

Margaret Wong lives in Sacramento now, but she emigrated from Hong Kong in the 70s. Five years ago, she co-founded the US-China Railroad Friendship Association, to tell the stories of the Chinese immigrants who built the Transcontinental Railroad.

"There's a lot of Chinese community. It's because of this history," she told ABC10 after Monday’s mural-reveal event, where she addressed the crowd. "It was amazing that how much of the perseverance, how hard they work. They left the families, they came over here, they work contract for six years to finish this railroad."

The Chinese workers faced discrimination, including lower pay than their white counterparts, yet the railroad owes its existence to them.

"I'm very proud of this mural,” Wong said. “It really tells the story, you know, tells the contribution of the Chinese, the Americans, and I think we need to be able to continue to build up that relationship."

Only through teamwork was the Transcontinental Railroad able to come together in six years, just as teamwork brought this new mural together in seven days.

"We were a team and a family doing something very important to correct history,” Conrad said, “to give a nod where a nod was due and to change the way that kids perceive the Transcontinental Railroad, from here forward."

Wide Open Walls will flood Sacramento with color and music in August.